After having an unschooling site up for a couple of years I realized it had NOTHING about music. It still doesn't have much, but here are a few links and I might collect good comments the next time the "should I force them to practice?" discussion comes by. An exchange between Sherlock Holmes and Dr. Watson:

Do you remember what Darwin says about music? He claims that the power of producing and appreciating it existed among the human race long before the power of speech was arrived at. Perhaps that is why we are so subtly influenced by it. There are vague memories in our souls of those misty centuries when the world was in its childhood.

'That's a rather broad idea,' I remarked.

'One's ideas must be as broad as Nature if they are to interpret Nature,' he answered.

Transcript of a chat on Musical Intelligence, musicality, rhythm, emotional uses of music "Autodidact," free to hear or download, by an unschooling family: Autodidact

"Since the beginning of time, children have not liked to study. They would much rather play, and if you have their interests at heart, you will let them learn while they play; they will find that what they have mastered is child's play." —Carl Orff

I want to remind people that music doesn't live in notes on paper, it lives in the air.

People can be VERY musical without knowing how to read or write music, just as people can be very verbal, tell stories, be poetic and dramatic without reading and writing.

The first and best thing you can do concerning music is to have it in your lives, recorded and live, performed by others, performed by yourselves by singing, at least.

In 2013, I took down several pages that had "jukebox" style playlists, from a site called Playlist. They were fun while they lasted! While deleting those pages, I found a few things worth noting and saving.

The song "Mustang Sally" has an interesting history, noted here: https://en.wikipedia.org/wiki/Mustang_Sally_%28song%29. If you like the history of songs, you can google a song name and sometimes come to a page like this, but there is a site called Songfacts.com filled with trivia about songs, and you can subscribe to updates.

The lyrics game that used to be on a blog is being played (in 2013, anyway) at facebook, here, and the basic game (unless someone sets one up and specifies otherwise) is as with "Encore," from memory, play the part of the lyrics that contain that song or subject.

This page had links to several flash games involving music, but they are sadly obsolete and no longer available. Rest in Peace, Singing Reindeer and others.

Rockapella playing sing-off with True Image from "Spike Lee Does it ACapella, from the 1980's (with Spike Lee and Debbie Allen goofing around on the side there).

Since then, the easiest access to fancy a capella polyphony is probably Pentatonix. They have a Youtube Channel, PTX Official.

All their stuff is great, but here's something especially fun:

History in Songs
(Battle of New Orleans; We Didn't Start the Fire; American Pie; Abraham, Martin & John; Pinky and the Brain...) History of Rock'n'Roll 1953-1964 — illustrated history with links. Very nice. The notes were for one at smu.edu that's gone now. I've found a replacement for it.

Midis, MP3s, lyrics, several sites for national anthems and patriotic songs, and by deleting the ends of URLS (you'll see when you get there) you can get to LOTS of other things (flags, maps/geography, trivia, art/icons, older anthems, a BBC radio quiz on national anthems, how to draw the Union Jack...)

ENCORE, THE BEST MUSIC GAME EVER

Encore is a wonderful game you can play at parties or in the car. You can ignore the whole gameboard and just play turns with teams. I can't tell you where to buy it. Used to be "Thrift Stores" but there's a new edition in print now. If you go to google.com you can search for it and find reviews (all will be glowing) and prices and sources. Here's google at least.

I love Encore, but the most interesting thing about it to me is how it changes the whole way memories are searched and accessed. You will be amazed at the things you can dredge up in SECONDS from your brain, and once you stop sorting by places and times (or however you usually feel your memories are stored, if you even think about it) and start sorting by individual word or idea, things just start to FLOW, and in a wholly different way. It can take hours for that to wear of, and the next day you'll be thinking of good answers that hadn't come to you at the time.

If you want to just try some, and get ideas for making up your own, here are three cards from the old set, and three from the new. Each set has 96 cards, and you roll 1 through 6 to know which of the items to sing. The first five are exact word, the bottom is a category. You're supposed to sing eight words of the song with that term in the lyrics. (I think the new game says six words.) 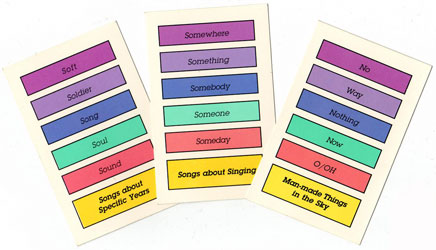 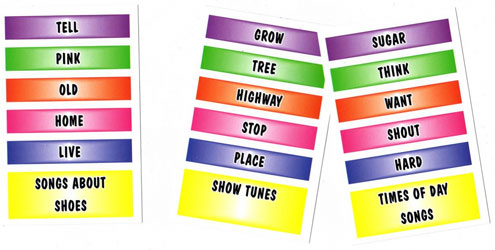 On my way to checking out the Encore music game you mentioned I noticed that you have the Chris Bliss juggling video on your music page. My son is a juggler, and he showed it to me. What is interesting, is that an expert juggler who kept having that sent to him by lots of people, did a parody of it.... [read more...] Junk Music
links sent by Melissa/autismhelp, whose dad sent them to her!

Musical Instruments for Children's Museums and Playgrounds (lots of photos, and links to how to make things)

Noisy Toys, an intervew with a Robert Hilton, a percussionist who makes instruments from found objects
and the main page of that site, a little store in Los Angeles, with links to their many other interviews and news articles

Invented Instruments with clear photos and SOUND FILES! Those above are mostly percussion, but this has some stringed and wind instruments too.

Experimental Musical Instruments' Free-Bar Calculator. If you want to make an instrument like a marimba or wind chimes or other metal-tube instrument, you can use these two calculators to figure out what length your pipes need to be to harmonize—you can figure out any tone relative to another, if the pipe is uniform.

THANKS, Melissa's-dad, for gathering up those links!

Harry Partch's Instruments (part of the Music Mavericks series) If you have a Flash player and Real Audio you can hear them and play the online versions of them.

Some musings for the music pages
[email protected] * February 2006

As a former General Music teacher in the public schools, now at home with an almost-five and almost-three, it is striking (and somewhat humbling) to see the difference between a music education at home and a formal one in a classroom setting.

For example, a few months ago the local symphony was performing "Peter and the Wolf." I didn't even know if my girls would be old enough to appreciate it, but figured we'd give it a try, and we bought tickets. The week before the show I went to the library and got an "Elmo" video of the story, a picture book about it, and a CD of the performance with David Bowie.

Well, the girls loved all of it! My four year old had no problem sitting through the performance and wants to go again someday. She has [figured out] how to play some of the themes on the piano. We still sometimes listen to it in the car, at their request. For weeks they would pretend to be the different characters and act out parts of the story together. The whole thing turned out to be a huge experience for them.

This was such a huge contrast to when I once "covered" Peter and the Wolf in my first grade music class. The students got to do little more than hear the story once, then listen to the piece once. Most of them were squirmy and appeared bored while listening to it, since they were sitting still in a classroom. The worst thing was that we could not even listen to the entire piece in one class period, and had to split it up among two different days!

I have some classroom materials called "Music Mind Games" (designed by Michiko Yurko, who also wrote the accompanying book) which I used a lot with all ages. My kids sometimes dig them out of the closet or ask to play them with me. The other day they were doing the giant foam puzzle with a grand staff and remembering that "G Clef" was a character from the Blues' Clues movie. My four year old will ask to play Rhythm Bingo with me, and can recognize patterns using sixteenth notes, eighth notes, rests, etc.

Even though the activities themselves are the same as what the school music students did, the learning process seems so much different to me, so much broader and freer. My own kids can play it a lot one week, then not at all for a few months. They have an adult right there to answer any questions they have. They can stop whenever they went. They can use the manipulatives to make up their own games, if they want, or change the rules, or whatever.

Even the way my four year old gets to explore playing the piano seems far better than my own private piano students' experiences. Most of them barely have to time to play, between school, homework, and soccer. A lot of them are told by their parents what time to play, and for how long. Some of the parents make playing the piano a prerequisite to playing video games. In contrast, my daughter might walk up to the piano several times during the day, for a couple minutes, or maybe longer. She plays whatever she wants to. Often she asks me to play duets with her. When she said she wanted to learn to play the harp, her grandmother bought her a lap harp, which is also played whenever and however she wants.

On top of this, my kids sometimes get to accompany me to rehearsals and concerts I'm involved in myself. I'm hoping this will happen a lot more as they get older. Last year I played in the orchestra pit of a production of Annie and my then-three-year-old attended the show. She already knew the songs and had favorites from hearing me work on them at home. Sometimes in school music class the kids would watch a video of a musical, but often had a worksheet to fill out while watching it, to make sure they were "paying attention."

Anyway, those are musical scenes from a home with very young children. I should stress that my kids have neat musical experiences, not because they have a parent who is a music teacher and "started teaching them early," but rather because they live with a musician who loves music and lives with music, and therefore they do too.

JEWISH LITURGICAL and traditional other

Chazzanut Online Jewish Liturgical music. There are a few MIDI files and some MP3s, in and among articles and other links.

Once you start poking around in the MIDI sites, you'll find lots of links to other interesting things. There used to be four links to Christian music, too, but they're mostly disabled or too old to work.
/

There are two Beatles pages, and each leads to the other.