Unschooler's Pipe Wrench, by Deb Lewis, on humor as a primary tool for living well

Every joke you get proves knowledge of history, and those you don't get? Get used to not getting every joke; it will never happen that anyone gets every joke. Accept that with a smile.

In Defense of Cartoons—many voices there, but Deb Lewis shines

Strongbad used to be an entirely flash-video site. The pieces were so beloved, though, that nearly everything was rescued in other formats.

Burninator (I can't find a playable "Thy Dungeonman" as of 7/17/20, but it was not very elaborate anyway.)

Where do rainbows come from? 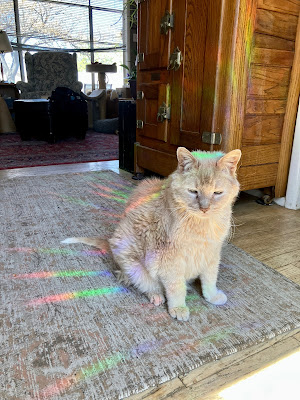 To Get More Jokes

Then one day, the question came phrased a new and better way: "What is this GOOD for?" The answer I gave then changed my life and thinking. I said quickly "So you can get more jokes."

To Be Fascinating at Cocktail Parties, by Sandra Dodd

Playing with Definitions of Words

Marty Dodd's 2005 100-word poem which he read while twirling a toy gun, at a Live and Learn Talent Show near St. Louis

Unintentionally funny, with my notes around it (with a correction about the food; I first put muffins, but it wasn't).

Where to start? Where does it end? Politics, religion, dietary scares, fads, logic…. Humor….

This was written in public in a cooking forum. Something to do with muffins. [NOTE! Granola bars, not muffins. This might matter to someone.]
It wasn't intended to be funny or ironic. It is candid evidence of a way of thought.

"We thought about going on the Paleo diet but my husband and I are both creationists so we decided against it."

I shared it once before (maybe here; not sure) but just came across it again and it is a jewel, a crystal, a marvel of snake-eating-tail mixed-philosophical-media unintentional ART.

"We thought about going on the Paleo diet but my husband and I are both creationists so we decided against it."

Mel Bouse commented: "it is a jewel, a crystal, a marvel of snake-eating-tail mixed-philosophical-media unintentional ART" I think this is the best description of anything I have ever read!