Infancy in light of Unschooling

Someone came to a discussion and assured us all that children under five were like scientists from an alien world. That sounds good at first, until you remember that they are natural parts of their own world. A sixty-year-old man is no more a human, no more a person, than a newborn baby. Children don't need to be taught to speak, if they have a fairly normal range of faculties. Making the exception for children with deformities or who are deaf and blind, let me talk about the other children who can learn to talk.

The same mom wrote, "Not only have they never seen, touched or experienced anything in our world—they also have no way of communicating thoughts, feelings or desires with anything more than frustrated cries, screams and babbling."

There is touch. There is gaze. Have you never just looked into the eyes of your child, communicating? Have you not touched them soothingly, and felt them touch you back sometimes? They can tell the difference between an angry look and a gentle look.

Parents who didn't know touch was a real way to communicate could practice on babies, and then use it with older children, and partners.

For children to learn language, they need opportunities to hear words, and for people to pay attention to the sounds they make. Mimicry is good, with babies. Even before they can articulate consonants, they can probably copy your voice going up or down, and you could copy them back. Singing little made up two-note songs can be a good tool for communicating with babies. Copying touch is good, too. (Don't return rough touch with rough, though.)

Let them hear you speak, and find opportunities for them to hear others speak. Although there are justifications and theories about what babies like and respond to (high voices and sing-songy voices seem to appeal to babies), don't revert to a whole babytalk language with them. Some is fine, but talk to them about real things, too. Tell them what you're doing with them, and what they're seeing, when they're out and about. Don't quiz them, just talk. It's fine if they can't understand you for months and months. They'll be learning your tone and your moods and the speech patterns of the language even before they have vocabulary. You will be building a relationship that is not based on the meaning of the words, but on the sharing of the time and attention. You're paying attention to what the baby sees and touches and hears. The baby is paying attention to you.

If you can keep that up for eighteen years, you've got unschooling!

I remember the first time that my son realized that he had a foot. He was probably somewhere around 6 weeks. He had been 5 weeks early and low birth weight, so he was finally getting up to the size of an average newborn. I was changing him and had to apply some ointment and powder; well, this made the whole ordeal too slow and he fussed a bit. To express his feelings on the matter, he kicked his feet up in the air. Well, then he noticed his own feet. He proceeded to grab one of his feet and pull on it and looked at it and moved it a bit. He then tried to get it in his mouth and missed!! He then noticed that he had two of these nifty things and tried basically the same things with the second foot. I was fascinated to watch all of this. Here this tiny baby that had had a pretty rough start was absolutely enthralled with his own two feet!!

That is natural curiosity and exploration at a very early age. Children are naturally inquisitive. As a matter of fact, parents spend a lot of time protecting and (unfortunately) thwarting a child's natural desire to explore. Every time a child tries to get into the cabinet full of breakable glassware or knives or household poisons, they are being naturally inquisitive. Of course, any reasonable parent prevents a child from harming themselves, but when a child discovers pens or crayons and wants to draw and proceeds to explore how they work on the wall, how a parent handles the conflicting needs of the child to explore and the adult to have crayon free walls will indicate their parenting philosophy.

As an early unschooler, I grabbed the big roll of paper and taped it on the wall and let my daughter rip. I spent time watching her draw and drawing with her. Now, on reflection, I might have asked her to only draw in a specific place and painted it with really scrubbable paint. I would have still drawn with her and at some point I would have invited my children to help me scrub the walls (not required them, just invited) so that I wasn't the only one having the fun. We would have sung songs about scrubbing the wall (this is the way we scrub the wall...). This might have failed and I might have ended up with crayon all over the walls of my home, and we would have had to gotten out the big roll of paper and have a wall scrubbing party.... But either way, there would not have been a little girl who was shamed or punished for exploring the world with crayons.

Arguments in favor of babies and toddlers being "unschoolers"
Erika (ejcmassage...)

I don't think anyone would have noticed a difference in how I was parenting, but there was definitely a shift in how I saw my child. I was able to let go of the fear of him not developing on time, of needing to teach him all the basics (and feeling like a bad mom when I wasn't doing flash cards and such). I was able to see just how amazing and capable my son is all on his own. I also started making sure I was helping him get access to the things that he was interested in, more so than I would have before. I realize that can be easier with a young child (but a lot of the things we do are with older, unschooled kids, like airport tours, trips to museums and such), but it's an effort I think goes beyond just AP, it's an active role facilitating his interests. To me that is unschooling, and I don't see why I wouldn't be an unschooler until he's the age the state thinks he needs to start being educated, after all aren't we always learning?

I don't go around proclaiming myself an unschooler (well at least not to people who don't understand what it is), but that's mostly because I don't feel like getting the eye roll and, "well yeah, he's two, wait till he's 5, you'll be counting down then days till school starts". But I do fully consider myself an unschooler, and have no intention of ever sending my kids to school.

~Erika
More of that discussion on the Always Learning list here, in September 2009
Read about a baby being told by a social worker to use a spoon and not fingers, to eat, but about advantages of beginning eaters being able to feel, smell, and learn about their own foods: Children reach for food, at Just Add Light and Stir (in the comment there). 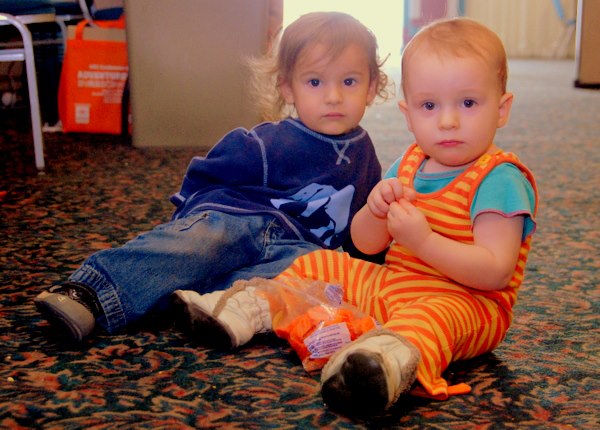 More photos of babies (and a duckling) on posts at Just Add Light: Posts with the image tag "baby"

More on Infants and saying yes to infants

More about eye contact, with a link to info on infants