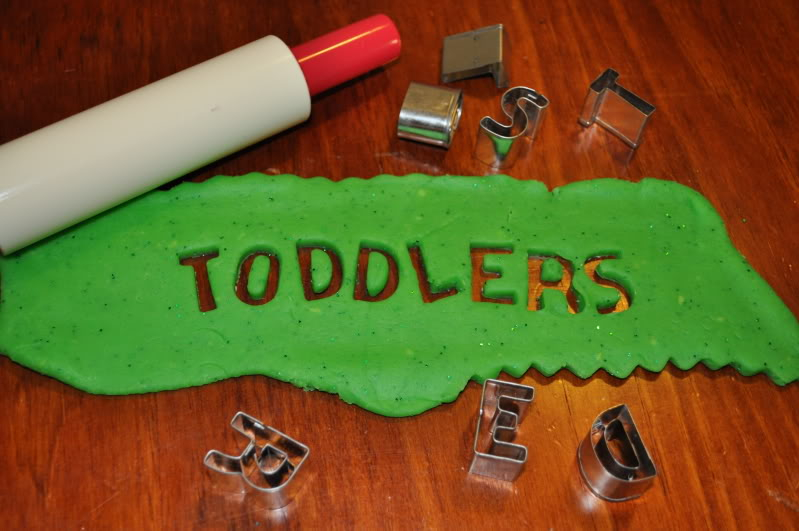 Repository for assorted "how do you cope with several very young children" bits, as they come up.

[In response to questions from someone pregnant with #3 with two older ones five and three, I think:]

It was a harder adjustment for the older kids than for me. Be really sweet to the older ones.

Our load was lighter because the boys liked to sleep and live in little sweat pants and shirts, so if they'd take a bath, I'd put new clothes on them that they could sleep in, and in the morning they were already dressed. If they weren't too dirty at night, falling asleep in what they wore that day was fine.

"Were you able to feel like you were meeting everyone's needs" isn't a fair way to ask. Would "feeling like" you were meeting them be better than doing your best to make unhappy kids happy? You just need to do the best you can. You're pregnant. No backing out now.

Peacefully to bed was helped with cassette tapes, but nowadays kids can watch DVDs from bed if you're lucky. Or I could nurse the baby to sleep while singing to the older kids sometimes. They didn't always go to sleep at the same time, and that was better for me, usually, because it was a way to get quiet time with just Kirby or just Marty.

I used a backpack to carry one of them. They're not good for tiny infants, but for a kid who can sit up and hold on, it's great. I could put Marty up there and still do things with Holly. When Holly was older, I would go for walks at night and she would fall asleep up there. Or when we went out Keith would take Marty in the frame backpack, and I'd take Holly in the Snugli (front sling) and Kirby got all the running-around and hand-holding attention.

Instead of having a rule that kids had to hold my hand in a parking lot, I would park near a cart and put some kids in right away, or tell them to hold on to the cart (a.k.a. "help me push", so a kid can be between me and the cart). And they didn't have to hold a hand. There weren't enough hands. I'd say "Hold on to something," and it might be my jacket, or the strap of the snugli, or the backpack, or something. 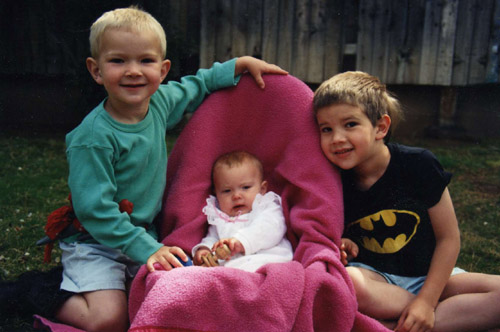 Kirby was 2 1/2 when Marty was born.
Marty was two months short of three when Holly was born.

Right at this moment they're all in Marty's room being friendly and chatty. Kirby just got back from karate and they're sharing the stories of the day.

Those three kids in the photo are all employed in real jobs. Kirby was moved to Austin by an employer. Marty is 20 and buying a jeep. Holly works at Zumiez half time and at a flower shop some, and has another couple of projects out of state in the possibility stages. She's 17 and has had a serious boyfriend for a year (a friend of Kirby's for years, and of Marty's). —Sandra

Kirby moved back to Albuquerque after nearly nine years of working for Blizzard Entertainment in Austin, bringing his partner and her five year old daughter. He got a job nearly immediately, and though they've been living with us, he's found a house to buy and will move out by the end of the year, it seems. They're both working tech support for a contract company.

Marty is married, living in our old house, and working for Target, but plans to go to the University of New Mexico full time beginning in January, to study economics. He's taken all the classes he can take at the community college.

Holly has been working in Chama, New Mexico, in a couple of jobs (restaurant and art gallery/gift shop) for the summer, and will move with my sister to Española, my home town, to share a house with her cousin and his partner and soon-arriving baby for a while. Holly has worked several jobs since the 2009 update, and travelled by herself across the U.S. (Albuquerque to Washington DC, with many stops to stay with friends), and to India and England.

Toddlers can grow up to do things you would not have thought of or planned for them, and they can grow up happy and whole.

Kirby has two toddlers and an adopted (former step-)daughter who is 12. He has been married for five years, and is working at Honeywell.

Marty has two toddlers (one is nearly four, so... he's graduated from that designation), and has been married for seven years. Marty did finish that degree in economics / geography, and is working as an analyst for the police department.

Holly just turned 30 and moved into a house of her own. She helps me babysit those four little grandchildren, sometimes. So does the oldest grandchild. It's harder for me, being old, than it was when my own were little and I could carry two of them.

click for Toddler mentions at Just Add Light and Stir Young Children, chat transcript and links Siblings: Attending to Very Young Children and Their Siblings (chat transcript with stories and ideas, 2014 "Living with a Toddler.....again....Please HELP!" folder at (old) unschooling.info. Ideas for things to do in the winter, by Deb Lewis Other unschoolers' typical days

The title art was sent by Tammy in Australia (greenjellysnakes) in April, 2009.
Her three-year-old helped.