How do you apportion your patience, attention, courtesy,
time, money, material help, respect?
Those sorts of decisions make you who you are.

(Sandra Dodd, from a discussion of a whole 'nother kind, but worth thinking about)


In a discussion on the Always Learning list I came to a pocket of ideas too big for that list. It might be too big for this blog, but at least it can sit here and collect clues and links over the years. Bob Collier wrote the first part. He has an evergrowing set of links and commentary with some really great stuff, and I'll put that link and the link to the discussion from which this came below.

It's interesting that maintaining eye contact is so often promoted as the 'right' way to interact with another person. It clearly in my experience doesn't produce rapport as effectively as interacting in whatever way the other person is comfortable with even if that means no eye contact at all.

I imagine there is something subtle going on as to primacy, something instinctive and inavoidable. Our culture has taught us (and our grandparents for a thousand years or more) that instinct is bad--ignore it. Strive to overcome it. Work through faith in juju, or logic as laid out by philosophers, or doing what your relatives tell you. Always let your culture be your guide—unlike that crazy Jiminy Cricket talking about thinking for yourself, only he WAS talking "conscience" and not instinct. Conscience is the collection of rules and messages and warnings we carry around to hold our problems up to (if we're lucky). Fetal alcohol syndrome can prevent that from happening. Some people harden early and have emotional scars where they should've been building a conscience.

So if "make eye contact" become part of our conscience—one of the things on the checklist to do to be a right and good person—that's not bad. If "be sensitive to others" follows pretty quickly, we'll probably all survive. I can be sensitive to others who would prefer less eye contact. They could be sensitive to me by at least looking at my ear or my hair a few times so I don't feel totally ignored. If that's harder for them than my part is for me I'm sorry, but the whole culture can't sway to accommodate people with problems making eye contact or shaking hands.

If gaze is part of the animal behavior we've been called on to ignore (but we can't, really, we can just be ashamed of it or accept it), then there's something to it that words and wishes can't take away. If I can make contact and someone else can't, then I'm alpha in that second, or I'm being challenging. It's the way bullies intimidate people. It's the way CEOs get ignored. It's why some adults let their mothers push them around.

It was my mention of handshakes that caused me to want to leave it alone or make it bigger.

So for people who come by here, what do you think about eye contact? What have you been told, or read?

What about cultures where people bow? Isn't gaze part of the formality there too, so it's taught? 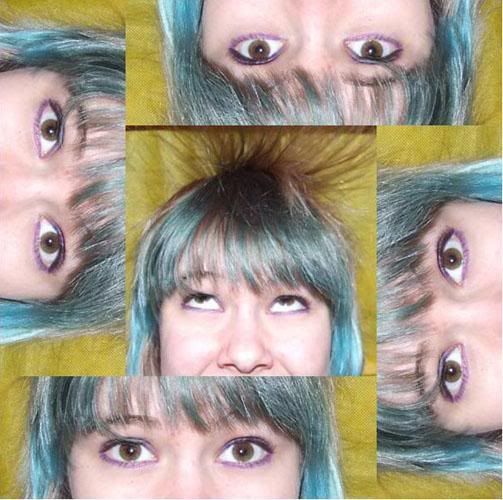 photo of and by Holly Dodd; arrangement too; 2006

Psychologists now know that people who are carrying out a complex task tend to look away from anyone else who is nearby. They refer to it as 'gaze aversion'.

Ren Allen did the painting, on Holly, who is making eye contact with a camera (2013): 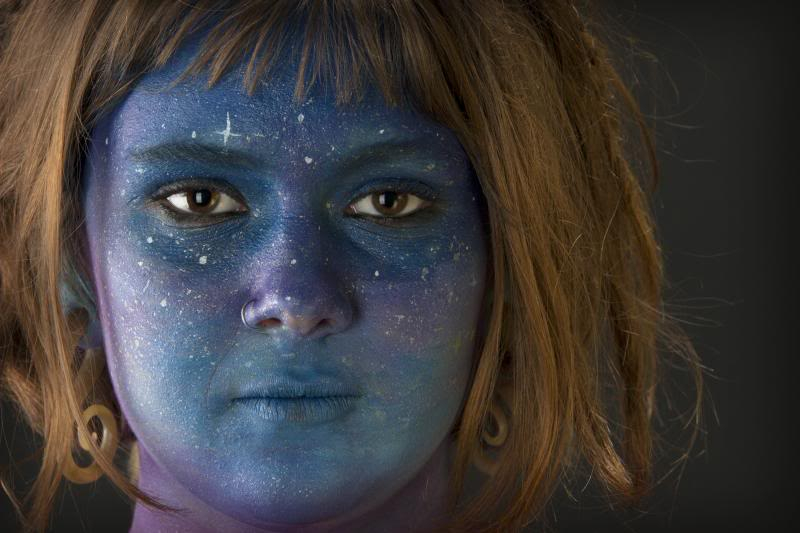 Ren Allen wrote:
Eye contact is overrated. Some people listen better when they don't look into someone's eyes. There are different ways of doing most anything and trying to push eye contact may be unhelpful for some.

I/Sandra responded:
Right. She's very right. Too much eye contact is hostile primate behavior. Don't go against instincts when you don't have to!

When I say a teen couldn't make eye contact with me, there's more to the statement than that. They might be just used to ignoring adults. They might have been hostilely looking elsewhere. They might be showing fear or disgust.

When someone recommends turning full on toward the child, that means don't keep reading your newspaper or your computer screen. Pause the DVD. Put down the gardening tools. It doesn't mean stare at the child until he finishes his story. It means to be WITH him, with him in thought, and with him in emotion if needed, and with him in awareness.


It was part of another thread, but had some good stories and ideas.

I think being side by side with someone is a good way to focus attention away from eyes yet still on them, so they can speak without the intimidation and confusion of your face right in front of them.

The "last July discussion on eye contact" mentioned above is long, and broken up a bit.

Pam Sorooshian wrote something long and thoughtful, July 10, 2008 (←click that), and if you want to see responses, there are over 80 posts at "people complaining about their own kids".

Those and other photos of Holly (with several photoshop-art selfies)