Value and Uses of
TV and Video
for Unschoolers

Whether to forbid or limit access to video and television is a recurring topic among parents and homeschoolers. It's great to find learning everywhere! 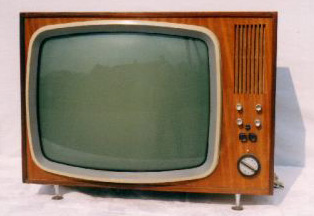 "It's not because unschooled children are superior that they won't exhibit the behaviors that parents fear. It's that their lives lack the factors that cause children to use TV in unhealthy ways."

"Everything I really need to know I learned from video games and cheesycartoons."
An account of a family's changing beliefs and practices.

WHAT CAN HAPPEN if little kids watch TV all day?
Will they ever stop? Will they ever learn?
TV Choice
Joyce Fetteroll responding to
illogical indignation
The Simpsons

Unexpected Learning
"their knowledge surprised us"

HOW Unschooled Kids Watch TV
eclectic tastes and other factors

A Richer Life
"bursting into song" and other surprising joys

History of TV
Links to sites and museums

Does TV cause Violence?

WHY? Why not?
Some arguments for and against TV.

Snobbishness vs. Godzilla
A tale of beauty and love.

What are some good Unschooling Movies?
Unschoolers recommend movies to help others understand unschooling.

Do you want arguments against TV?
Links to various anti-TV sites, with some of their art

"I went looking for any decent studies on the effects of tv on children and came across this new study — statistical one involving 300,000 children over many years."

We find strong evidence against the prevailing wisdom that childhood television viewing causes harm to cognitive or educational development. Our preferred point estimate indicates that an additional year of preschool television exposure raises average test scores by about .02 standard deviations. We are able to reject negative effects larger than about . 03 standard deviations per year of television exposure. For reading and general knowledge scores— domains where intuition and existing evidence suggest that learning from television could be important—we find marginally statistically significant positive effects.

PRESCHOOL TELEVISION VIEWING AND ADOLESCENT TEST SCORES: HISTORICAL EVIDENCE FROM THE COLEMAN STUDY, on the faculty site of the University of Chicago School of Business, published in The Quarterly Journal of Economics, February 2008 OTHER OUTSIDE LINKS:

What is TV doing in the 21st century? This hopeful article says many things, including that it helps create "a world more equal for women, healthier, better governed, more united in response to global tragedy, and more likely to vote for local versions of American Idol than shoot at people."

Is "I Love Lucy" Educational? by Jan Hunt, The Natural Child Project

Don't Blame TV for ADHD Symptoms
"While previous studies have linked early television exposure to attention problems, a new study in the March [2006] issue of Pediatrics failed to find a connection between ADHD and TV viewing habits."

"If students aren't taught the language of sound and images, shouldn't they be considered as illiterate as if they left college without being able to read or write?"
George Lucas
"There's so much comedy on television. Does that cause comedy in the streets?"
Dick Cavett
"If I can't picture it, I can't understand it."
Albert Einstein
"All of the books in the world contain no more information than is broadcast as video in a single large American city in a single year. Not all bits have equal value."
Carl Sagan
"I have learned a hell of a lot through watching film and television. That's where most of my knowledge comes from, is the TV. Discovery Channel! Endless assimilating. I'm like [the] Borg. I assimilate information from telly."
Eddie Izzard
voiceover commentary
on Dress to Kill DVD
And that doesn't even begin the glorious topic of VIDEO GAMES!

or the later boogeyman called Screens or Screentime