by Amy Kagey, with illustrations by Trevor
One dark spooky night not so long ago, under a full moon and while the wind howled....my 5-year-old developed a fascination for monsters. I can thank (or blame) my brother for this as he was caring for the kids while my husband and I had a much-awaited night out together. We found out later that he and the kids (aged 5 and 3) were watching An American Werewolf in London on TV. Luckily, it was an edited TV version as I remember it as a pretty gory movie. 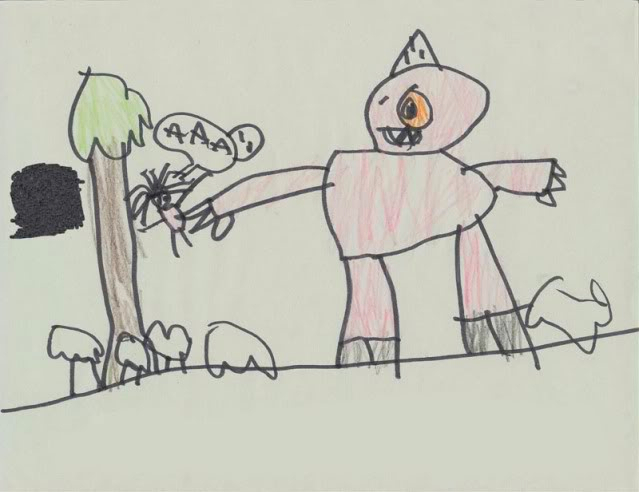 My son couldn't stop talking about it the next day and requested more information about werewolves. I made a special trip to the library for werewolf books. There aren't many non-fiction books on monsters out there, especially for kids, but I found a few.

In those books, we learned about other varieties of monsters from literature, movies or history like Frankenstein, vampires, the Loch Ness monster, Godzilla, and mythical creatures. Reading about mythical creatures prompted us to read a few Greek myths about the Minotaur and Medusa. We also found some abridged editions of classics like Mary Shelley's Frankenstein, Dr. Jekyll and My. Hyde and Dracula and read them aloud. 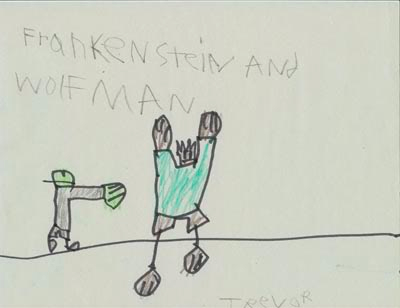 Videos have played a big part in our quest for monster information. We watched old black and white movies like "Frankenstein Meets the Wolfman" and talked about why old movies weren't in color. We watched movies like King Kong and Godzilla and I explained why the voices of the characters in Godzilla didn't match the movement of their mouths. Even music videos have played a part in our monster study. We watched The Making of Michael Jackson's Thriller and learned about special effects and monster makeup in the movies.

As Halloween approaches, we see zombies, ghosts and monsters everywhere in the stores and on TV. It's time to start thinking about making Halloween costumes and I'm helping Trevor get his costume together....he wants to be a vampire. Go figure.

In November 2011, I wrote to check on Trevor's last name, to add him to the arts credits page, and his mom responded:

I got such a kick re-reading the monster article. Trevor is now a 6'1" 14 year old teen who shaves. LOL

Same mom, same Trevor (when he was five): Learning With Dinosaurs


How a Monster and a Dead Guy Named Howard Led a Boy to a World of Connections, by Deb Lewis

Movies as a Playground, as tools, as portals, with a bit about Ray Harryhausen and other related and seemingly unrelated topics.