In Defense of Cartoons

Can you tell me how it can serve a child if they say spend hours a day watching Scooby-Doo ?

I asked my son what he thought a person could get from watching cartoons. He said he's learned a lot from watching Loony Toons and especially Daffy Duck. "What?" I asked. "I learned that you really can solve all your problems with dynamite!" 🙂
Don't panic. He was being funny.

But really, maybe hours of Scooby Doo is glorious fun. Fun is serious. Fun is important, especially for kids. Don't underrate fun. People who are not happy as children seldom find easy or lasting happiness as adults.

But there are all kinds of things a person could get from watching Scooby Doo. They are kind to Scooby, they love him and wouldn't leave him behind, he's their friend and they would do whatever they could to save him if he was in danger. It might inspire someone to think about kindness to animals.

Freddy, Velma, Daphne, Shaggy and Scoob genuinely care about each other, trust each other. Might inspire thoughts about friendship and trust.

They work together, plan and organize. It might inspire thoughts about the usefulness of cooperation.

They handle tough situations with humor. That might inspire someone to think about the value of a happy and positive attitude.

That e-mail continued, and Deb answered questions about
whether it becomes a habit, and whether it was efficient,
and what skills they would learn for life, and to function as adults,
and how it compares to schookids who learn in a variety of ways
and... here

Rabbit Of Seville (these keep disappearing, so I hope this will last a while)

Here's the original they were spoofing:

How about the Bugs Bunny, Barber of Seville cartoon?

Dylan can recognize Rossini and Wagner almost instantly anywhere he hears them and that started with Bugs Bunny. Not just the pieces used in cartoons but pieces from other works as well.

Bugs Bunny led to Wagner, led to operas, led to Vikings, led to Valhalla, led to Mythology, led to religion...

Those are a few examples I easily remember but there's been endless learning from cartoons. There have been so many connections to great movies and literature and music. I'm always surprised to hear people say they don't see value in cartoons. Cartoons for the sake of humor have been a delight to my son. How do you measure the value of joy? If he never learned anything from them (which is impossible) but they made him happy that would be enough. They've been an inspiration to Dylan, who draws cartoons and is designing a set now for a claymation movie he wants to make. (Spell check wants to change claymation to cremation, which is a little creepy, a cremation movie.)

Part of a discussion from a now-defunct message board:

Does anyone have an opinion on the educational value, if any, of cartoons? It seems to me that those unschoolers who insist that watching television has some value are talking about documentaries, history channel, animal planet and the like. Most children I know, however, really love "mindless" types of cartoons that don't seem to have the same value. I realize that pure entertainment counts for something, but I have a hard time not seeing this viewing as a big waste of time. I know Sandra has pointed out that a lot of times these shows can instigate conversations on important topics that otherwise would not be brought up. Any thoughts on this?

"Any thoughts on this?"

Yes, lots. Let's see if I can express them well. We have two girls ages 7 and 5. They watch more TV than I would like but I think everything is educational. They do watch shows like "Kratts Kreatures," and "Popular Mechanics for Kids" but they also watch a fair share of "Arthur," "The Simpsons," and "Sailor Moon." I talked to my oldest daughter, Jennifer, about it. She loves to draw particularly cartoons and told me that she likes to watch them because she wants to learn how to draw them. Jennifer is fascinated by animation and wants to learn how to do her own cartoons. Another goal of hers is to write and illustrate her own books. She loves to draw the characters from "Arthur" and build her own stories around them. She also loves to compare the TV drawing to the book drawing and has noticed how the characters are different. Both girls frequently sit in front of the TV and draw the characters. Doing this has helped them both with their observation skills. Jennifer's drawings in particular are quite detailed. 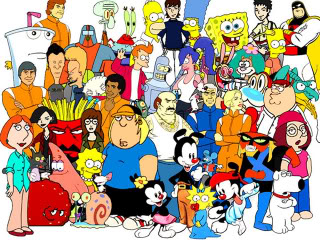 Good observation skills are not only important to artists but to scientists as well. I read a book "Great Lives: Nature and the Environment" which profiles several people [mostly scientist] who have made a significant contribution to environmental studies. Many of these people were also skilled artists.

I realize I have made quite a leap here—watching cartoons to scientists but the point is we don't know what skills our children will need in their adult life. Watching and drawing cartoons is fulfilling some kind of need right now and that is fine with me.

"Sailor Moon" has captured Jessie's imagination. At least once a day she has to play "Sailor Moon" by herself. She turns around and around until she is Sailor Moon and rescues all of her dolls from evil. She's got all the lines down pat and it seems to energize her. There have been times when I have used Sailor Moon to help Jessie overcome a problem. For instance Jessie has been having a hard time getting a basketball into the net so I'll say "Dome on Jessie use your moon crystal powers, keep trying you can do it." This motivates her and she continues to work hard.

As long as you are aware of what your children watch, occasionally watch with them and talk about what they, see television will not be a problem.

I have seen kids watch TV as they might wear a sensory-deprivation suit—to avoid being in their homes because their parents are mean or nuts. I have seen that.

I assume when people talk about kids just zoning out, that they have seen such escapist attachment to the TV as a savior from the real world.

I know people who are safer watching TV than not.

In the absence of insanity, alcohol and drug abuse, TV is probably NOT the safest adult in the house.

So given that as a basis (yes I HAVE seen kids just zone, and I'm on their side even then), I can defend the following cartoons:

-=- I realize that pure entertainment counts for something, but I have a hard time not seeing this viewing as a big waste of time. -=-

Oh THAT is the subject matter.

"Pure entertainment"? I don't think I believe in that.

If someone is being entertained, that person is thinking. That person is analyzing SOMETHING, and every trail made in the brain is a reuseable trail, and a trail to connect to other things.

If someone is NOT being entertained, they will be learning negative, yucky stuff--being made unhappy, learning what and who to avoid in the future.

Whatever your children do should be unfolding in as stressfree and joyful a way as possible. THEN it will be mindful.

If the opposite of mindless is mindful, it's not the stimulus but the thinking to consider.

Why would you defend the specific cartoons you listed but not Hanna Barbara or the others?
Do you have certain criteria?
Just curious! :) From a blog I found with image search; click to go to the post, which was called "bad cartoons."

-=-Why would you defend the specific cartoons you listed but not Hanna Barbara or the others? Do you have certain criteria? -=-

I'll use another analogy first so that we're talking about judgment and defense instead of about cartoons.

Movies: I can "defend" (justify as educational and discuss at length and get excited about) certain movies. I'l name a random selection, not my favorites in order, but different kinds of movies I've "used":

Well, this might not be educational, but it does throw in a bit. The Wild Thornberries...we love em. They "homeschool" their kids while traveling the world filming wildlife. We all like to watch it from time to time.

We also watch Redwall on PBS

My 5 yr old was "defending" cartoons the other day: he said that you CAN learn things from cartoons.
Like how to be a bowling ball!

**With cartoons, my criteria for joy is that the art is attractive, the script is jolting / fascinating / mind-expanding, the voices are not totally irritating, the plots are intriguing (or at least not total yawns), the values are either ready for adoption or cause kids to consider the characters' motives and morals. **

I think this is the way it works at our house. My son may watch the more cheesy cartoons, but gives them up quickly (two or three episodes and then he notices it's mostly repetitious).

Favorites here are Zoboomafoo and Pokemon. I can defend Zoboo, and I think my son gets something "worthwhile" from Pokemon, but it would be hard for me to express what that is in words. Certainly it captures his imagination.

But I did, after school, throughout my childhood. I think as an introvert, I was so wrecked each day by the stress of school that I needed two or three hours of vegetating in order to recover.

Scooby-Doo, Frankenstein, and a Big Storm, by Colleen Prieto
(and a little more Scooby)

More on television or parenting issues for unschoolers