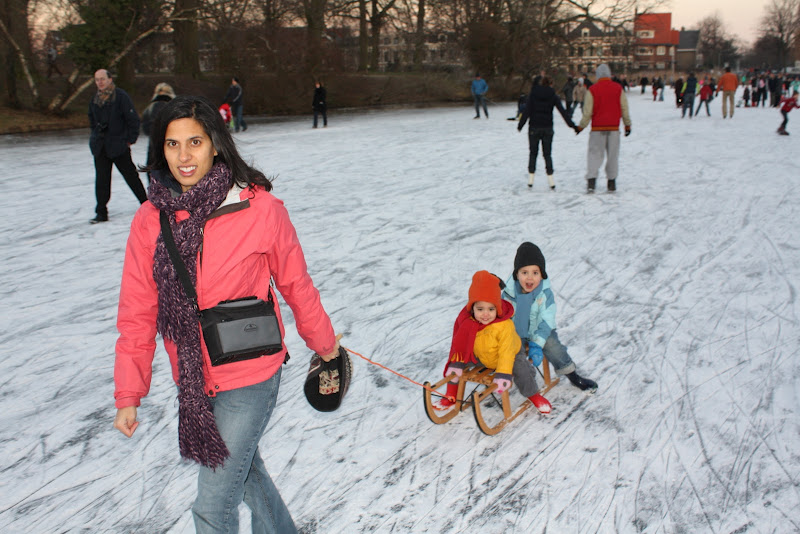 Rippy Dusseldorp lives in The Netherlands, in Leiden, with her husband, Graham, and their children Gianluca (born December 2004) and Gisele (October 2006). Their family started unschooling in 2008 and their children have always been unschooled.

In 2010, Rippy organized Leiden Home Learners, an unschooling-friendly homeschool group. Now there are several ‘Home Learners’ groups around the Netherlands initiated by different homeschooling parents. Graham coaches with their company, Maple Tree, and will coach unschooling dads about balancing work and home (link below). He also works as a Senior Policy Advisor and Peer Coach at the Ministry of Economic Affairs.

In 2012 Rippy organized a symposium in Leiden with one speaker (Sandra Dodd, me, and there's a followup site linked below). In 2013, I returned, with Joyce Fetteroll, for another symposium, and people attended from all over The Netherlands, and came from Germany, Belgium, Denmark, Luxemburg and Spain.

Unschooling is about children learning naturally and parents being partners in their children’s learning. Parents create and maintain a rich and interesting environment where children can follow their interests and passions. Children have lots of choices and options available to them. Parents facilitate, help, encourage, inspire, guide, support and love. Children learn, laugh, play, discover, explore, puzzle, build, invent, create, ponder, go on adventures and learn some more.

An important post about changing the world, and the legal situation in the Netherlands in late 2013: Ideas Worth Sharing

Please read the full post; it's wonderful. But here is a quote:

On Always Learning, my favourite resource, I wrote:

I sometimes hear from moms with young children that they wish they were doing more to change the world. I think parents that stretch and grow and learn better ways are doing that in spades. You are not only giving your children a better life, but other people around you can benefit from seeing examples of better choices. Your future descendants benefit as those better ways become part of your family culture.

I wrote this because I studied people who change the world for the better. I always wanted to be one of them. Quite honestly, I feel I am already making the world a better place through my choices. It is incredible to be able to give this huge gift of time and energy to my amazing children and to see them grow. I imagine that my years with them will put me in a stronger position to help the less advantaged in the world when I return to that part of my life.

Kinder and More Compassionate—An interview of Rippy Dusseldorp, by Sandra Dodd, originally in The Homeschooler Magazine in September, 2013

Interview with an expat, September 2021, The Holland Times (not about unschooling, but about her family, some)

Some of Rippy's writings from the Always Learning discussion are saved in various places on my site:

Local Groups —the benefits of a local playgroup and support group, and how Rippy organized hers

Responding to questions about unschooling

Healing Presence (when things have not been going well)

Thoughts on finishing what you start

History of Rippy's view of unschooling support, and of the Always Learning list

BENEFITS beyond just "be a better parent" Providing things usually obtained formally in other ways.

I don't really look to other mothers for validation on how I'm doing as a parent. I look to my children and my husband. If they are generally happy, relaxed, comfortable and engaged, I feel pretty good about how I'm doing....

If I see signs of frustration or stress or uneasiness in my family, there are alarm bells going off inside me telling me I need to be kinder, pay extra close attention, have more ideas, and offer more options."

(Quoted on Just Add Light, summer of 2013, with a link to the original writing there.)