Two and a half reading lessons. That's all Kirby ever had. And then he learned to read? No, I learned not to teach reading. Maybe I should've learned that lesson in school, though, when I "taught reading" the first year I was hired. I wasn't a reading specialist, but they didn't have one, so they gave me the 125 lowest scoring 7th graders and called it "reading." At 12 and 13, most of them read some, and a few read not at all, though they'd been in school for six or seven years before that.

It would be different, I thought, with homeschooling. One on one, no competitive pressure, no grades. And unschooling? Reading to him and playing with him would be all it took.

I was right, about that last part but what I hadn't learned yet, in 1992, was that each person's development is his very, very own and even in the absence of competitive pressure and school's schedules, there are people who aren't nearly ready to read at the age of six or seven.

Kirby learned to read privately, in some way unknown to me, and gradually. The book he first read fully and fluently and as well as any adult could was NES Game Atlas: The Nintendo Player's Guide, as he was working through the original Mario game. From that same book he had already learned map reading and deductive reasoning (solving the bonus round from the chart showing the only eight permutations the matching game had).

By the time Kirby was reading well and my worries were calmed, Marty was five and had decided to stay home too. We had thought maybe he would opt for school, but he chose home.

Marty had the indicators pointing to dyslexia: left handededness, skill at puzzles requiring spatial reasoning and sequencing, and confusion between similar-looking letters and numbers. My dad was that way. Marty's dad was that way too, so I didn't expect Marty to read early. We kept him supplied with Lego, mazes, and puzzles of all sorts. He saved his allowance and bought a used Playstation, and a game called Breath of Fire III. I found a used player's guide for it, removed the binding, put each page in a sheet protector, and he decorated a three ring binder for it. That was Marty's reading primer, and he learned to read as well as anyone, without lessons. He was nine. The vocabulary in that book was not simple or childish. It was aimed at teens and adults.

Holly's a girl, and girls are verbal, and girls read earlier, I thought. By eight, when Kirby had been reading, Holly wasn't even nearly so. By nine, when Marty had read, nothing. I wasn't as worried as I would've been had she been my first, and that was good for her. At ten, though, Holly started to worry because other homeschoolers she knew were reading and she wasn't. Younger kids were reading. One family was using her as a bad example ("You need to do these lessons so you won't turn out like Holly, who can't even read").

A couple of incidents greatly expanded what I had known before, though, and have changed my entire view of late readers. Holly was in a summer dance and theatre "camp," a five day all-day set of sessions. I told the teachers she wasn't a reader and requested they not ask her to read aloud. They were using the book Barn Dance for the production, so we bought a copy a couple of days before, and I read it to her several times. By the performance, some kids hadn't memorized their assigned verse, but Holly had memorized hers and everyone else's too. (The same thing happened in a play later. She couldn't be dependent on a script she couldn't read, and ended up memorizing the whole thing.)

Later that year, she joined Girl Scouts, and I told the leaders she wasn't reading. A schooled friend of hers offered to help her, but the "help" consisted mostly of reminding the other girls and Holly that she, the friend, had to help Holly read. Because that was the first time in their lives the friend had been a step ahead of her, Holly let it slide.

There was a presentation for parents one night. While the other kids were reading off paper, mispronouncing "Juliet Lowe," mumbling and covering their faces, Holly's portion of the program was clear, involved eye contact and her own words

When she was eleven, I wrote this:

Holly wasn't reading at ten. She wasn't happy about it, either. She is at the point now where she is reading words without meaning to. For fun she tries to walk around the house without recognizing any words. At eleven, she's still not reading chapter books. But if you met her and talked to her you wouldn't think for a second, "I bet this kid doesn't even read," because there's not much she can't talk about, and if she knows nothing about it but it sounds interesting, she'll ask intelligent questions.

Though Holly wasn't reading, her vocabulary was sophisticated and she was fascinated by the history of and connectedness of words. When she did start to read, she had no reason to use easy books. She was still eleven when she did her first real reading, a Judy Blume novel. She read two of those, and moved on to Steven King's novelette "The Body."

When she had only been reading a couple of months, we were sitting down to watch "The Twilight Zone," Holly reached over to move the Tank Girl comic books she had been reading. One was called "The Odyssey." Then the DVD menu came up, and one of the episodes was "The Odyssey of Flight 33." She commented on it, and I said "You saw the word 'odyssey' twice in an hour? Cool!"

She said, "I saw the word 'odyssey' twice in one MINUTE!"

Kirby reads like a lawyer. He can skim a rules book or instructions for a game, and explain simply and clearly to others. If he forgets a detail, he'll be able to find it easily. Marty likes humor and history. Holly's main reading is on the internet, but she likes name books, and other non-fiction and trivia. One thing she doesn't use the internet for is definitions and spellings. She likes my old full-size American Heritage Dictionary, and will sprint upstairs to look something up on the slightest excuse. Meanwhile, I've come to rely on google as my dictionary, thesaurus and spelling guide.

As their reading ability unfolded and grew, I learned things I never knew as a teacher, and that I wouldn't have learned as an unschooling mom had they happened to have read "early." Reading isn't a prerequisite for learning. Maps can be read without knowing many words. Movies, music, museums and TV can fill a person with visions, knowledge, experiences and connections regardless of whether the person reads. Animals respond to people the same way whether the person can read or not. People can draw and paint whether they can read or not. Non-readers can recite poetry, act in plays, learn lyrics, rhyme, play with words, and talk about any topic in the world at length.

I have three teenagers now, all of whom read very well. Their learning was not slowed down or put on hold for premature or frustrating "reading lessons," except for those two and a half short lessons Kirby suffered, which I would take back if I could.

Reading will happen, and if it takes longer for your child than you think it will, keep them happy and distracted in the meantime. As their experience and vocabulary grow, their reading will be that much more effortless the day they're fully equipped to understand the written word.

Here is the WayBack Machine's archived copy of the article: Three Readers

When the article was written, the kids looked like this: 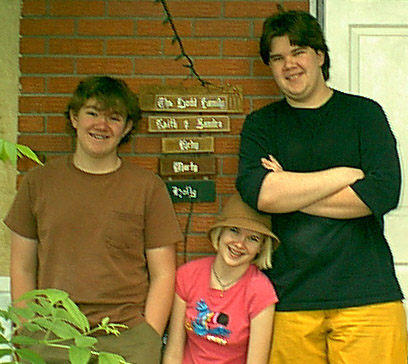 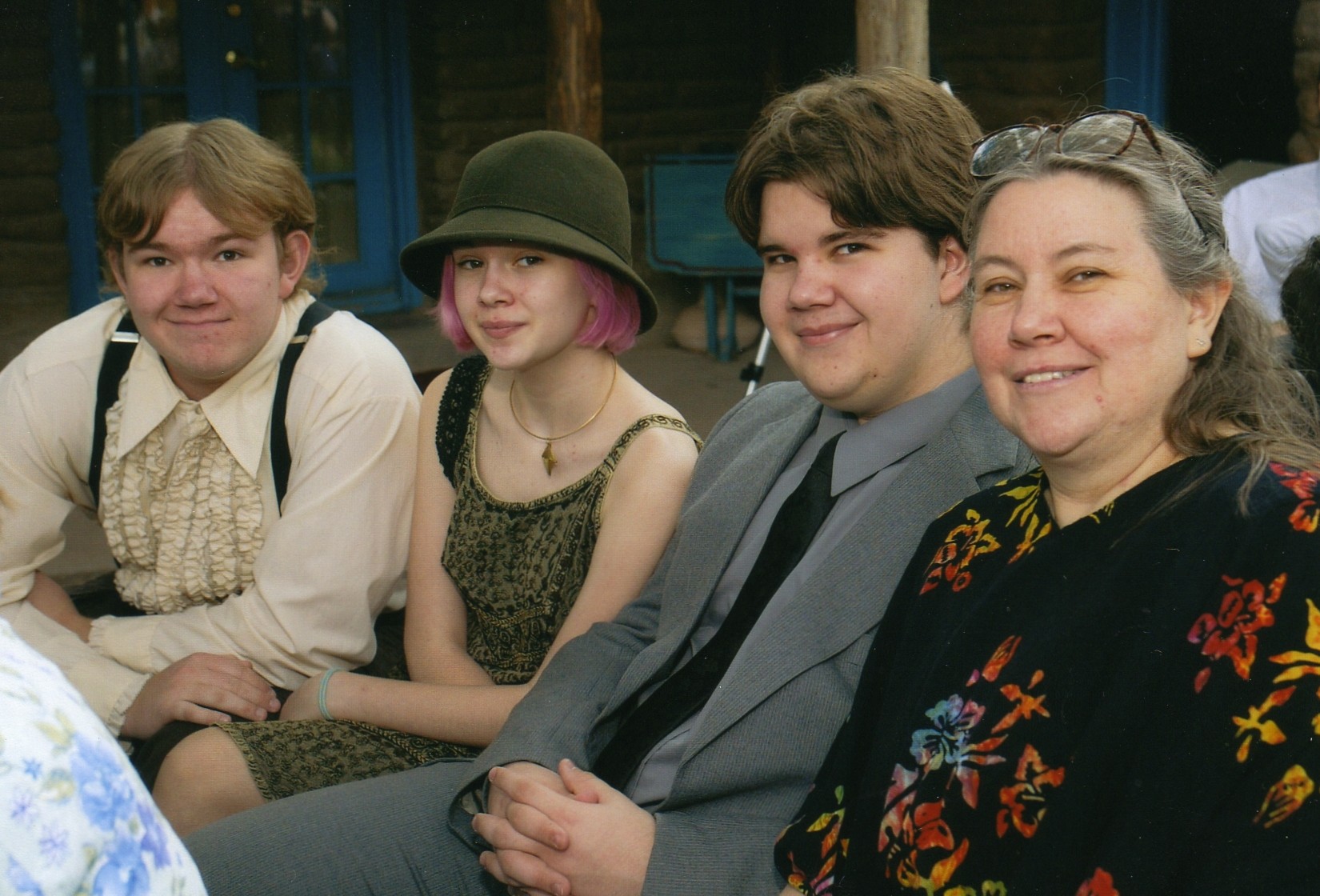 these and other photos of them, younger and older

Click for same kids, earlier reading accounts, when they were younger,

and many more stories of unschoolers Learning to Read Naturally