and connections made from and with them

[My five year old daughter] and her brother emptied the small bank on the table and were playing with the coins as I was eating my breakfast at the table. She asked a couple times about how much was this coin again. So I taped one of each coin to the cork board and got a tub of push pins. I put one push pin under the penny. I put 5 under the nickel and then she wanted to take over and did the dime and quarters push pins. She started talking about it referring to how many points each coin was worth. The look on her face was like "I understand this now."

I don't really think it was the display we created that made it click for her. She was talking video games and point value for each coin. So I placed a dime in one hand and a penny in the other and she chose the dime. I held 3 pennies in one hand and a dime and she still wanted the dime because she told me it was still worth more points to have the dime. We continued with this game and she was quite good at it. She told me why she would rather have a quarter than 2 nickels.

I think the other day she would have chosen the bigger coin (the nickel instead of the dime). I really think it clicked for her because she has played video games for many hours. Collecting different coins and making purchases in the game. She was able to tranfer some of those concepts into real life. How cool is that? Keep on gaming children.

Pam Sorooshian described a game they've played at their house:

A game related to powers of ten that my daughter enjoyed a lot (which might sound a bit boring to read about, but she really really liked it) was this:

Put a dollar bill out on the table. Put a pile of pennies and dimes out. You need one die. Take turns rolling the die.

Keep going - if someone gets 10 dimes they get to trade that for the dollar and win the game.

You can let the winner keep the dollar, but if you play it a lot, remember she'll win about half the time. So we'd just put the same dollar back and play for it over and over.

At the HSC conference in 2002 there was a workshop on Video Games hosted by Dan Vilter, Kathy Ward and I [Sandra Dodd], and three demonstrating gamers: Matthew Vilter, Jonathan Ward and Holly Dodd.

One example I showed was this, from an early Mario game. We had a black and white photocopy of this chart (which was in a player's manual Kirby got when he was five or six), glued to a piece of cardboard, on the shelf in Kirby's room. 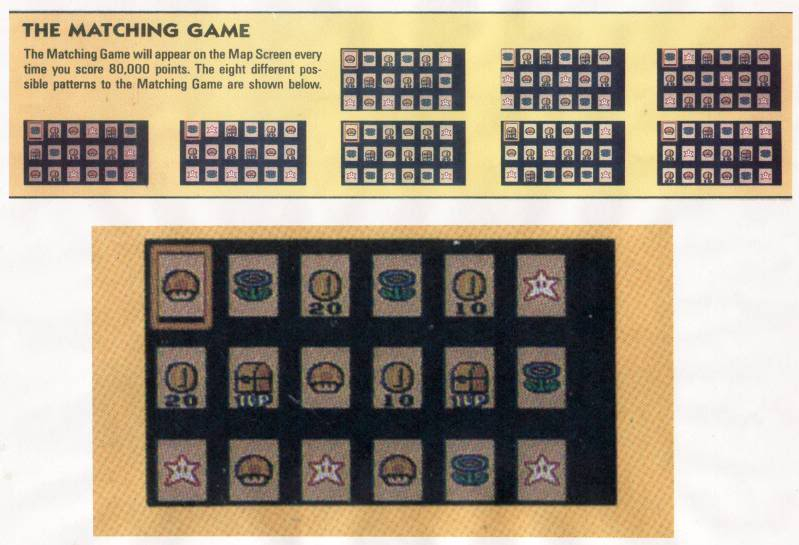 The background of the videogames page was created from this art—
my first Photoshop project. —Sandra

It's a matching-game bonus round. Without the guidebook, we might have thought it was a random arrangement each time, but there were only eight permutations. So by helping him eliminate possibilities, he learned to "get the bonus" every time. At first he would call me to help. After a while he was helping guests and neighbors do it, with his chart.

That's not purely a coin value chart, but given the context of the game, it has that flavor.

Later, more complex games came up with values in the absence of "coins." In Harvest Moon, the factors to consider are vast, and many involve time, which makes it a four-dimensional puzzle. The lefthand column in the chart below shows what can be earned by selling produce. What it doesn't show is that the seeds for those different crops have different prices, and the growing seasons are different lengths. 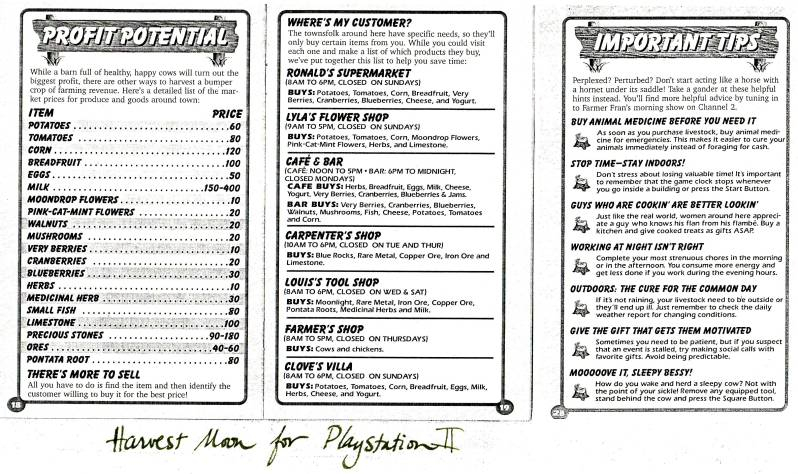 This is about value, not coins, really, but having three grown children I can say they don't use coins much at all; they hardly even use cash. All of my kids keep their money in the bank and use debit cards. When they want to exchange money with "the bank of dad," they use electronic transfer.

Kathy Ward's writings which we also used as a handout for that workshop are newly here:

Video Games, by Kathy Ward
I was recently reading a guide book to New Zealand and read about penny-farthings you could rent. I had no idea what this was so I had to do a search.

A Penny-farthing is one of the old fashion high wheel bikes. The front wheel is very large and the back is small. The relative ratio of the wheels is like a British Penny and a farthing. The ratio I think is more like half dollar to dime. I also learned that a farthing is a quarter of a penny.

And there were quarter farthings—sixteenths of a penny. Those were about the size of the modern half-P. Thirty odd years ago when I lived in England you'd still find the occasional quarter farthing being passed off as a half-pence, and old shillings were still accepted as... oh I'm forgetting, was it five or ten pence? Are those still floating around in the UK? I'm thinking a shilling was ten and the half-shilling was five (originally shillings were 12p). Anyway, it was certainly a case, like modern US money, where you had to know the value of the coin from the size and shape, rather than from any information on the coin, itself, since that information was significantly out of date. 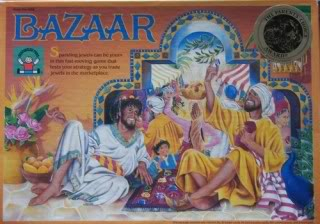 A board game we played when the kids were young involves the value of "jewels"—a kind of variable exchange rate. [One of the most memorable games was Bazaar, a game with exchange rates and values but requiring no numbers or reading. (In Germany there is a similar game called Bierbörse.)** ] If you ever find one used, it's worth getting. [New edition, note added in 2012: Bazaar Board Game]

There is a free downloadable electronic version, but it totally loses the esthetics of the board game art and colored glass markers.

Notes and images on the board game.

The Many Benefits of Video Games