There was a bit of confusion, and Joyce Fetteroll clarified:

That is, if one of the principles you value is kindness, you be kind. Insert yourself when the atmosphere in the home is not kind. (Even better is to be there to redirect to keep it from devolving to unkindness) Help them explore solutions that are in keeping with your principles.

I hadn't thought of this before but principles are like language. You don't teach your kids how to speak. Language is a tool that you use to communicate. So you speak to kids. And as a side effect, they pick up language. But to learn language, they need to be immersed in it. Language needs to be something they find useful for their own needs. Otherwise, why would they use it?

You can listen or download your own at this link.

Two comments that were at Amy's site (which is now, sadly, gone):

Crystal
December 5, 2014
This interview was EASILY my favorite one so far! thanks so much (again) for taking the time to interview folks and for putting this all together. It really meets my need for understanding and deep living. Peace to you!

Kirsty Harriman
February 15, 2015
Fantastic. Thank you for taking the time to do this. Sandra is so succinct and makes unschooling make sense in the way she explains principles and how they’re so different from rules. How much richer and expansive and more integral and whole our lives can be if we live according to principles and priorities, instead of the limiting and often nonsensical nature of rules. I will need to listen to this podcast again again. To me this is the core if getting unschooling. Thanks again. I am loving all your podcasts.

ANOTHER COMPANION PIECE for the recording on Principles is Principles of Learning—a chat transcript about the list of principles Pam Sorooshian wrote up (Unschooling Principles). This should help those who heard the recording and really wish I had listed some principles.

Early in this thread Sandra said:

"What might help with the decision is to decide what your principles and priorities are."

When I read that, I had the (incredibly obvious, I guess, but still) thought that ANY time, around any issue, not just tv, that those guilty-strange-controlling-squeamish thoughts and feelings come up about something my kid wants to do, this would be good advice to follow. To find the principle I want to live from—not to impose it in some way, on them, but to live from it myself—grounds the charge of my murky fears right out, and guides me in my actions. If I'm really going to be a kind, joyful, generous person who values freedom and choice, then I'm really not going to control tv or sugar or sleep or whatever because that wouldn't be kind, or freedom-creating, or joyful, or generous. Full stop. Living from principles, rather than fears, is the easiest way to grok unschooling, as far as I can tell. (But maybe it isn't easy, because it took me a long time to figure that out for myself, haha. I was all, 'what is all this rules vs. principles stuff anyway?' Now, in my unschooling, it seems like the most important part.)

The issue isn't tv. The issue is whether you really value freedom and want that for your kids. If you do, then it doesn't matter the thing, tv, sugar, sleep, video games, yada yada—if you want them to be free, you're going to help them do what they freely choose.

Twelve years later, a note in 2020: I wish Maya had written "If you really value choices..."
I know what she meant, but some came along who pushed too far about "freedom," and now I recommend against that term, as a goal and principle. Choices are great!

Notes on that: "Freedom," and unschooling

One of the kids that live near us, said rather astonished, "you don't have any rules do you?" I looked at him and said, "yes we do, they are, play nicely and behave kindly." He didn't think those were rules, and they aren't really, but that's where it all seems to come down to. A rule of no hitting, could be summed up nicley with "be nice," because clearly hitting isn't nice. Being nice covers it all.

Sandra Dodd, in response to "I'd say the park is a place for loudness!"

Even in a park, time and place can be factors. I wouldn't expect to have a quiet conversation with another adult at the bottom of a slide. But if I went 40 yards from there and we were sitting on a bench, I might shush someone who got right between us while we were trying to talk and even use the "shhhh" sound.

We met in a park with other families for years. Morning before lunch. LOTS of noise, sometimes staying longer, eating running, singing, rough-with-sand (if there weren't younger kids or kids who weren't wirh our group).

Keith and I also took our kids to parks after dark a few times, and swung them on swings to calm them down, and to have some fun in a cooler, quieter place after some big activity or other, or just for the fun of cold slides instead of the hot slides Albuquerque kids are used to. But we were helping them be quiet, snd screaming wouldn't have been good, in a residential neighborhood after dark. Yes, legally the park is open until 10:00 p.m. but legality isn't the only consideration.

And a rule that noise is okay at a park isn't as good as looking at the principles. 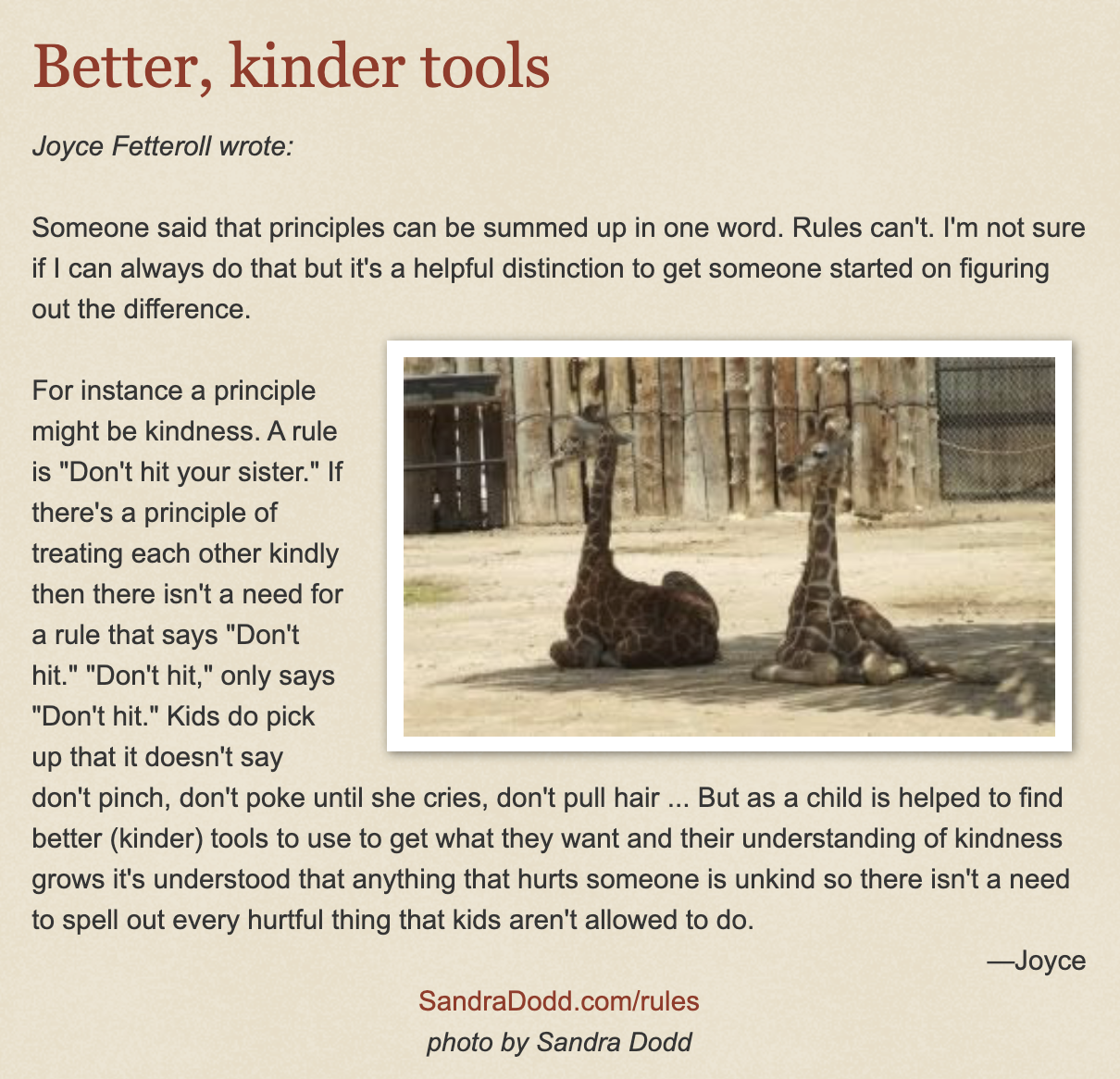 Rules and Principles and Math

Logic and Parenting, by Joyce Fetteroll

How to Raise a Respected Child, by Sandra Dodd, concerning respecting children and giving them choices,and some unexpected results.