At your house it will be morning again within 24 hours, but it could be morning in your heart any second.

Somewhere in the world it is morning every moment. Somewhere, light is dawning. Some people, and I'm one of them, believe that any portal to the universe leads to the whole universe, and if that's true we should be able to get to everything in the whole wide world (and beyond) without much effort from something as small as, say, the definition of a word. How about "morning" and its particulars—daybreak, dawn and sunrise?

Every day the sun comes up (unless you're in the Arctic or Antarctic, in which cases your sun-mileage may vary). Every day is a new opportunity. People say that all the time: "It's the dawning of a new day." If you just let those thoughts and truths go by, you're missing something important that happens 365 days a year (sometimes with a bonus round). Don't miss important things like opportunities for renewal and change. At your house it will be morning again within 24 hours, but it could be morning in your heart any second.

"The morning of the world," someone might say, meaning just as the world was new and bright. From this we and our children can talk about and learn about poetry and figurative speech. "The morning of his life..." when likening a lifetime to a day, with its own first light, eventual afternoon, and twilight. These are common references. "In Queen Victoria's day..."

At our wedding my friends and relatives all sang "Morning Has Broken," and it was the morning of our lives together. Later that day we had three children. Well, later meaning over the next six and a half years. Sometimes time passes slowly, and sometimes it speeds by, and there is a lesson in focus, and in flow, and in biochemistry.

Some people collect bugs, or rocks, or videotapes. It's cheaper and easier to collect words. If you have a name that's a noun, like "Lynn" or "Holly" or "Gill" you've probably developed an ear for hearing it and an eye for seeing it in various contexts and have probably looked it up in dictionaries and name books to see how old it is. This can be done with morning and joy and tree and wind. I should have put quotation marks on those, "morning" and "joy" and so forth, to show that I mean the word morning, not the thing-in-the-sky morning. Now we're talking about punctuation, the mechanics of writing, and the branch of philosophy called ontology, about what "being" is — is the word "morning" part of morning itself? Is morning inside my head? Where does a "real" morning end and just talking and thinking about morning start? Can you pretend morning?

You can spend $20 on a Mensa-approved plastic puzzle, or a book of mind- bending questions, or you can just look out the window, name things, and think. You can play with a dictionary, ask each other odd questions, and look up the answers. It's the thinking that counts, the idea-getting, the biochemical ping when the light of a new concept dawns in your mind.

When people begin homeschooling, that's a big bright morning, but you can have as many mornings as you need. If you want to change the way you're being or thinking, just do it. Don't wait for another year, another month, another day. Good morning!

"Morning" appears in the book Moving a Puddle, and was previously published as follows:

first in the July/August 1998 issue of Home Education Magazine,
and in the August 1998 newsletter of LUNO (Oregon). 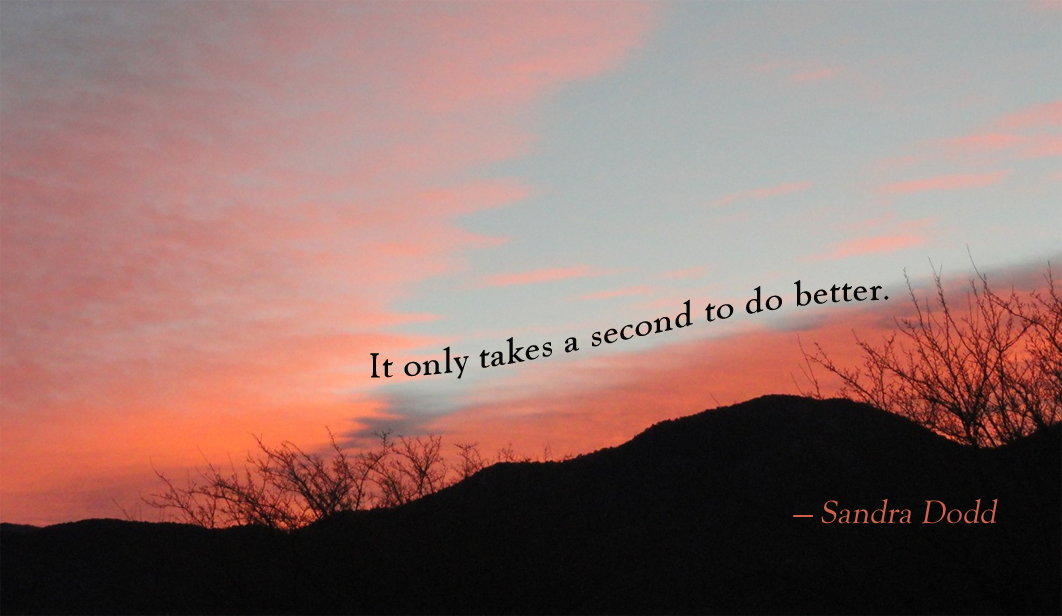 This image is a sunrise, viewed from our driveway. It looks like trees on a hill, but it's the tops of two nearby trees, and a mountain a mile or two past them. The mountains are a thousand feet higher there than where I was standing. That's a lot of sky, is what I mean to say.

It's available on a small magnet; click the image for details.

Epiphanies, and happy tales of change