Words and thoughts are what you will use to change your beliefs and behaviors. 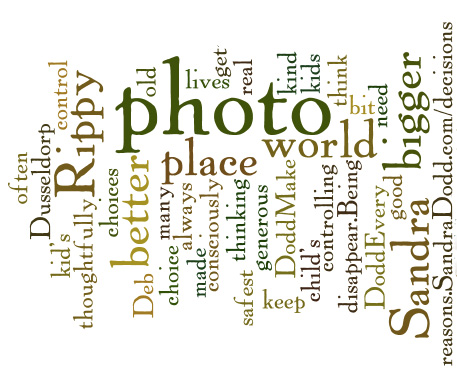 More and more I am beginning to understand what you say about the power of our words, the semantics of them, and what they reveal about our thoughts deep down. I used to think long ago this was a bit nitpicky, but really can see what you mean when I really stop and think about it.

I think that awareness (for me anyway) is easier to come by with some of our loaded words like "lazy", "she-he always/never.." and such, but most of us weren't homeschooled let alone unschooled and as such don't realize the impact of being graded, sorted, and categorized from the age of 2-3 or so (ie-being regarded as "toddler", preschooler" and so on). The more I take the word "teach" out of my volcabulary and am conscious of it the better it is for me and the easier it is to see my children's lives as one seamless whole and not divided by subjects.

SandraDodd.com/mindfulofwords (this page, linked before I brought this here)

If I were to name the biggest most important things I have learned discussing unschooling in groups like [Always Learning], I would put at the top :

-Being thoughtful and mindful- stopping to think instead of reacting.

It all started by being thoughtful and mindful of the words I was choosing to write here. That immediately not only spilled out to my whole life but I had to really stop and think.

I thought I was a mindful person but I was not. I thought I was clear and having gone to law school I did learn a lot about how words can make a huge difference. But it was here, when Sandra and others picked apart what I was writing, that I learned.

It has changed my life in so many ways that and it has led me to being more clear, honest, mindful, thoughtful, positive, respectful and peaceful.

I am not perfect but I have come a long way. My marriage had improved tremendously because of it too! My husband is a lot happier and I don't rag on him like I used to.

When I stopped to think which words to use, I also changed how I saw things and became so much more thoughtful.

"Evidently this is a place to chose ones words extremely carefully."

This was someone's whole post, in a discussion [in 2014]. Seeing it again has made me smile very much:
"Evidently this is a place to chose ones words extremely carefully"

YES!!
Yes, it is.
This group is a place to choose one's words carefully.

"Evidently this is a place to chose ones words extremely carefully" was not meant as a compliment or a reminder. It was intended to be insulting, snarky, to intimidate me.

This is in the intro to the group:

I do appreciate those who help us keep this group solid and useful. Thanks! Sandra to someone using words in harsh and loose ways:

A mom once wrote:

"Not at all! I wasn't thinking that way at all." That was in response to my having said it involved deprivation to have written that someone might have felt gypped out of a meal.

I haven't had a thought anything LIKE feeling "gypped out of a meal" for at least 18 years, as long as my oldest has been eating anything. That's why I saw it as a deprivational and negative statement.

If food isn't measured and timed, then how could someone really miss a meal, let alone be cheated out of one?

Sometimes what's revealed by a person's writing is not only more than she intended to reveal, but more than she was conscious of having thought. Yet there the words are.

Last week someone wrote me a long letter, part of which was this:

"It took me awhile to realize that your perspective as an outsider gave you a look at things I posted about myself and my family that was better than I could see as I was living it."

Not only do you not need to defend yourself when someone notices what you might have written, but in many ways you can't!