What if your child is an introvert?

Joyce Fetteroll's responses to a mom concerned that her 6 and 9 year old boys were insufficiently social. Joyce's responses are indented. I'm looking for ideas to give my sons more interaction with other kids

The first is good—*if* that's what they're asking for!

Which is something extroverts say because they think introverts are broken and need fixed. If introverts ran the world we'd make extroverts spend 8 hours a day by themselves so they weren't so dependent on being around other people to feel okay ;-)

Being an introvert, being forced to be social everyday in school was exhausting and intimidating for me. I didn't learn how to be more social. I learned how to blend into the wall so no one noticed me.

My daughter, on the other hand, who is also an introvert, does marvelously well with groups. She had the freedom to choose when to be with other people and when to be at home.

Then when they're older and their desire to get something from a group is greater than their discomfort of being in a group, they'll have the skills they picked up from people they trust.

You could give them a handful of tips on how to interact with people in a couple of minutes. (The best being: "Study other people who make you feel comfortable." :-)) But the best social skill they can have is being comfortable in their own skin, knowing that who they are is okay, so that they can turn their attention to other people when they're in social situations. And *that* doesn't come from being told their feelings about their discomfort aren't to be trusted, that they don't know what they need, that other people know them better than they know themselves.

no matter what it is, they refuse to give it a chance. ... Neither is the type to strike up conversations with people they don't know. Neither has any close friends.

You're looking outwards at messages of how kids are "supposed to be". Look at your own kids. What do they like? What bring them joy? What floats their boats?

Peace and contentment are vitally important to growing up whole. Happiness is a good indicator of those.

It is frustrating that my 6-yr-old, who is more confident socially, is following his brother's lead

I suspect he's following his own "lead" but the fact that his brother can stay home is letting him know it's okay to stay home too.

Even though he has absorbed the skills to be social, he needs that recharge time. He's spent so much time with forced socialization that he needs a long time alone to recharge.

He'll let you know when he's ready for social activities.

But I think they're not giving things a chance and missing out on social interactions and learning new skills/sports that they would likely end up really enjoying.

They seem to be enjoying what they're doing but you're looking elsewhere. While unschooling parents should keep the environment lively, bringing in new things to leave about —see Sandra's Strewing page ( /strewing )—new or old favorites of yours TV shows and movies, taking them places—a new playground, a new grocery store, an historical re-enactment, a polo match—the indicator of how well you're doing should be your kids peace, contentment and happiness.

Your kids will let you know when they need more. If they don't do something this year that interests them, they'll do it next year. Or the year after. Or when they're 15. As long as these activities are available for them to choose, they'll choose when *they* need them.

Joyce wrote "What floats their boats?" which is fun in light of.... in light of one of my Just Add Light and Stir posts, which I went to find for its quote, not remembering what the photo was:

How important is your child?

If your child is more important than your vision of your child, life becomes easier. 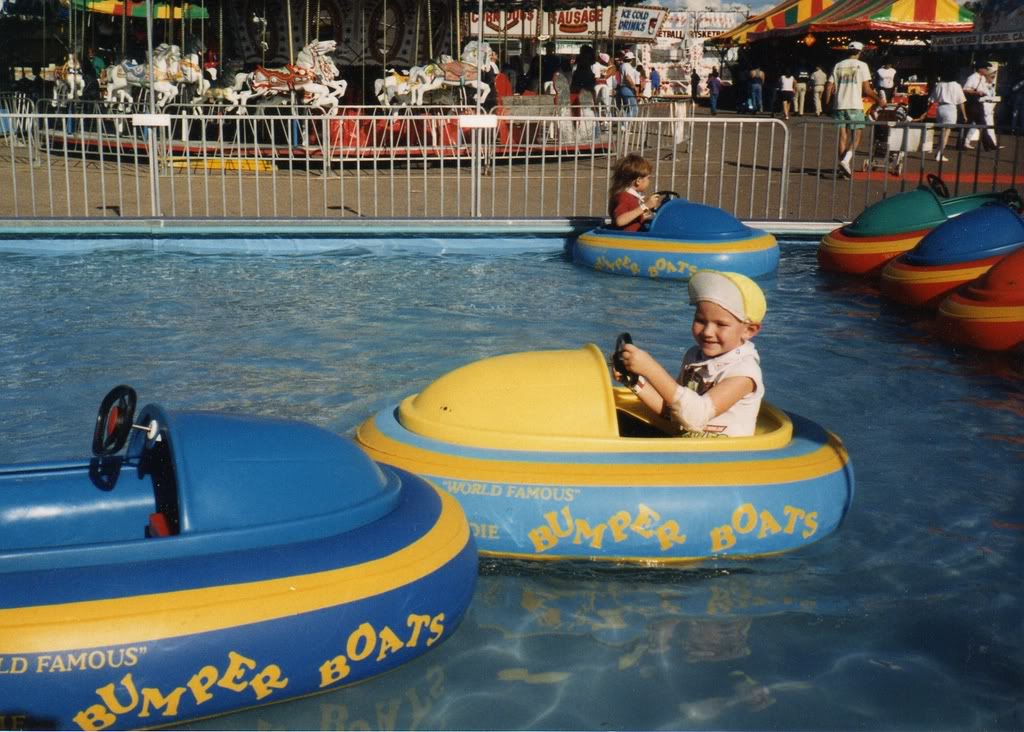 SandraDodd.com/priorities
photo by Sandra Dodd of Marty (in front) and Kirby (in red)

A wedge of this photo appeared on the cover of the first edition of The Big Book of Unschooling.

As a schooled child I watched a lot of TV. It was relaxing after the social pressures of school. As an introvert I needed a lot of depressurizing after being forced into being social 6 hours a day.

I think as an introvert, I was so wrecked each day by the stress of school that I needed two or three hours of vegetating in order to recover.

Being an introvert I watched *a lot* of TV but I got good grades, lived in the real world (that insisted I needed to be an extrovert and enjoy being around people all day), remained creative, went onto college.

If you're an extrovert then you need people. If your daughter is an introvert then she needs alone time. Neither is wrong. Unless the needs of one personality are being imposed on a totally different personality.

What does your daughter want? What does she enjoy? What do her actions and reactions tell you that she enjoys?

He'd rather warm up to people like a cat...on his own terms. So, it helps if ds is quietly engaged with a familiar video when we have company arrive and then he can come down when he is ready and everyone is sitting and he is out of arm's reach. Then he is apt to go sit with someone and visit. He is an introvert.

A chat on dads, with a question and some answers about introverts; search on that page.

Sandra, in response to: I don't buy that there are two categories of people.

Good point, and it's one aspect of personality. But it's one that's often over simplified and called "shy."

There's a range of "out" that people like, and even one person will go through phases of wanting to be out more, or wanting some hours or days or weeks of staying home.

Understanding the extremes a little better, and accepting that there advantages, though, is good.

Stereotypes are usually exaggerations of something that exists.

I used to get picked on quite a bit in school for the way I acted. I was shy, yes, but more than that, I needed time away from people to enjoy people more, and I needed less people at one time. I didn't know that then, and I bought the accusations that I was "stuck up" or "too good for everyone" or "a snob." Those labels were very painful because I have a deep inner love for people. I believe in the inherent goodness in most people. And, I wanted people to like me the way I was. I was doing the best I could.

Understanding that there isn't necessarily something wrong with me, is helpful, not only for me, but for my ability to support my husband and son, who are both introverts as well. They are both introverts in very different ways from each other and from me. My husband gets a thrill from talking in front of large audiences, but then he needs a couple days to do his own thing at home. He enjoys teaching and talking with people at work, but when he comes home, he needs some down time before interacting with my son and I. My son loves his friends. He plays with someone nearly every day. He can be the life of the gathering, full of humour and goodwill. When he is done, he is done. We need to go right home so that he can recharge. He prefers only one one-on-one social activity per day, and only one or two large group activities per week.

There have been times when someone will stop by to play with Ethan and he will say he is not up for playing at that time. I used to do that. At my wedding, a friend stood up and talked about how "odd" I was that way. Of course, she has been my friend for 35 years, despite my oddness 😉 She is very extroverted.

I have often worried a bit about Ethan. I worried that I was having a negative influence on him because of my own perceived "odd" ways. Through reading along in this particular discussion, it has been a great relief to understand better that how I am socially is not something I need to feel guilty or awkward about. It is a great relief largely because that will mean that my son will (hopefully) be more free from the inner voices telling him he isn't good enough than I have been. Introvert, extrovert, or anything in between, this has been a wonderful discussion on personalities and their different strengths and characteristics. I am truly thankful. 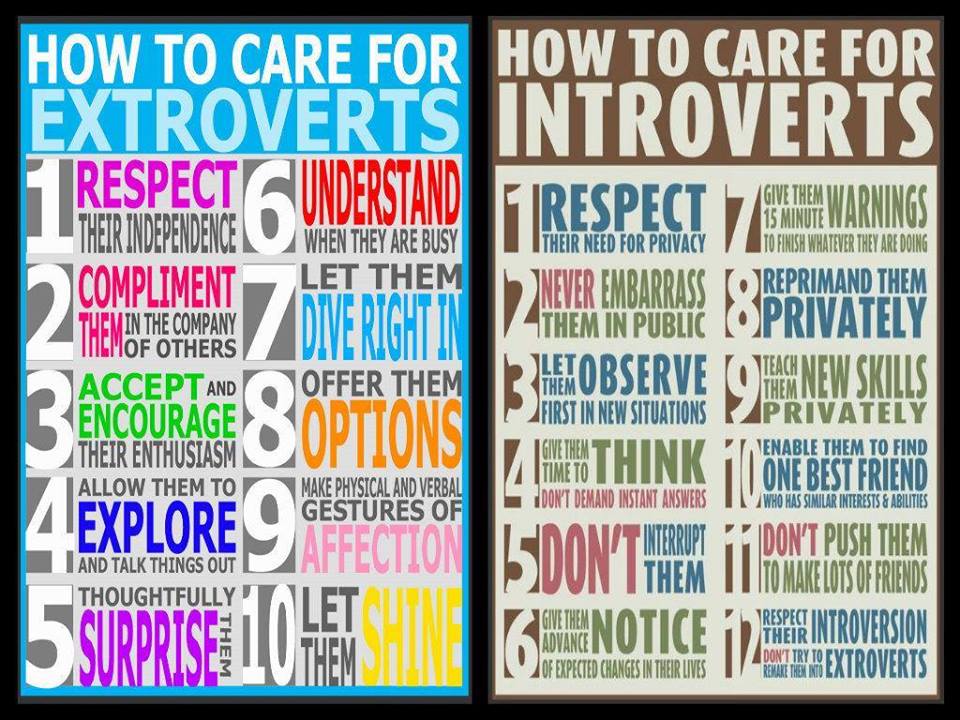 If people offer all of those courtesies to EVERY child (partner, friend), they won't need to worry about whether they're extrovert, introvert or a combo!