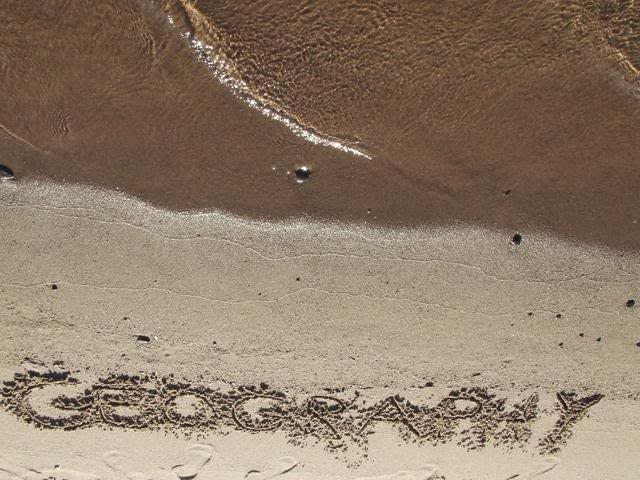 Geography has to do with people and places and maps and terrain and weather and politics, which can't help but be about history and speculation about the future. It's about business and anthropology and clothes and calendars. More about that here.

My husband and I were watching Lord of the Rings on DVD, sitting in the glow of Peter Jackson's Mount Doom, and I said, "Tolkien obviously didn't study geology."

The mountain formation around Mordor, in the Middle-Earth maps doesn’t show any regard for plate tectonics, but Tolkien wrote early, and he lived in England, and he studied languages. He's excused. The idea that Elrond and Isildur could stand on an unmelted rock ledge in the midst of a volcano and discuss whether the ring needed to go in the lava or not is more fantastic than flying Nazgul. I'm sure that later Frodo and Gollum will stand there and discuss it too, and that stone platform will STILL not have melted into the surrounding lava.

But it's only a story.

I studied geography and its related geology when I was thirteen and in a Jr. High classroom where sand came through the closed windows that had been installed by the WPA in a really cool, big adobe building, and the sand had to be blown off the pages of our four pound geography books before we could turn to the next page. This was the llano, the sand hills, half a mile west of the Rio Grande, in Española, New Mexico. I later taught English in that same room where I had learned to spell Tanganyika and Zanzibar. I later blew sand off pages of books, maybe some of the same sand I had blown out of the chapter on Peru and Lake Titicaca. We had a guest speaker during the cold war, who had been to the Soviet Union and told us about a coke machine with a public glass. When you put a coin in, the coke dispensed into a glass that people drank from and then left for the next person. That illustrated the dangers of communism, and the superiority of our scientific knowledge and sanitation and democratic way of life.

After eighth grade, it seemed, I was going to be through with geography, done for life. I had a piece of paper with an "A" written on it that I could carry always, to excuse me from any further geographical exercises.

So what IS "geography" anyway?

Literally, earth-writing. Generally it's considered first to be charts and maps (cartography, more specifically), but in school-terms, geography came to include physical geography (which touches then on geology and meteorology), political geography (which land is whose and why?) and cultural geography (who lives where, and how, and why?). Trying to separate it from math (how do they measure and chart all that?), history, science, language, music and art is to take all the good parts out of it! It's better to come to one thing from the others, so that from the very beginning it's all one great big universe (another Animaniacs reference

Two of my three children are older than thirteen now. They know about Tanzania for three or four reasons. Tanzania didn't even exist when I got that final passing grade in geography. I know about Tanganyika and Zanzibar, which quickly became history and not geography. If I were to suggest to my children that there was any difference between history and geography they would look at me as though I were speaking nonsense. Good for them. They know that the dissolution of a nation, or the creation of one nation from two, involves religion, language and culture, personal politics, support or the lack thereof of their neighboring states or sponsoring allies or colonizing powers. Nobody told me that in school. Nobody told my children that at home, either.

They know Lake Titicaca lies between Bolivia and Peru. You know how they know that? Animaniacs. A funny little song Animaniacs song we have on a sing-along video.

In a conversation at a restaurant the other day, technology and warfare came up, and I ran quickly through the technological "ages" of stone, bronze, iron and steel, to make some point I was making about stone-age cultures in the 17th century, and Kirby, who's sixteen, said he knew all that. Two seconds after looking at him to see whether he was offended at my condescension or whether he was just being matter of fact, I said, "From playing Civilization, right?"

I still forget. After eleven years of unschooling I still forget sometimes that the information that was doled out to me on a schedule is just OUT there for my kids, that they find it interesting and that they have no reason to avoid adding it to their fascinating collection of trivia about places, people and the world around them.

One day I was on the phone to a potential local homeschooler who was agitating about whether to take a fifteen-year-old boy out of high school. I was doing my own riff on unit studies, saying some people like to do two week units, and feel they're "through with dolphins" or whatever, and I said, "But you can't finish China."

Kirby, who was sitting in the room waiting for me to give him a ride when I was off the phone, said, "The Huns tried that."

"What? OH! My son just said, 'The Huns tried that.' I didn't teach him that. He learned it from a game, or a movie, or something." Kirby gave me a look that indicated that he didn't learn it all in one place, it's just one of those truths of the universe, free for the taking.

When I was teaching seventh grade English, long ago, instead of planning a poetry unit, each Friday I gave them the lyrics to a traditional English (or Scottish, or American) ballad, and then I sang it for them and told them what I knew about it. I never did any poetical analysis, just told them "It's Friday, and we're doing ballads on Friday." This one year, I was writing the lyrics on the board, and they could copy them down. One girl said with the avoidance-voice, "Do we have to MEMORIZE this?"

Some Fridays the ballad was short and they would request that I sing one of their favorites from a previous week. Many of them would sing along. Sometimes I'd miss a Friday and they would not be happy about missing their ballad.

In later years when I would meet one of those former twelve- or thirteen-year-old students, the thing they would remember and mention (or sing) was almost always a ballad. What they didn't have to learn was what they will carry all their lives. One ballad was about the Crusades, and Turkey. One had a parallel Scandinavian folktale, about rape and murder, and they asked, "How could they not recognize their own brother?" so we talked about life before photographs, and the travel realities of the Middle Ages. More than one involved "a little pen knife," and so we talked about quill pens and homemade inks, and life before pencils and ballpoints. One was about a train wreck on a three-mile grade. I wasn't supposed to be teaching history, folklore or science. But there was geography in all that bygone life, in stories handed down through generations.

The world is all a-swirl with music and maps and photographs of interesting architecture, costumes and ancient weaponry and technology. Gypsy carts and camel caravans and steam locomotives have their places on the planet, and nobody has to memorize anything to sort them out into their times and cultures.

So how do unschoolers learn geography? Better than I did in school. They learn it with flexibility and a lack of awareness of having "learned geography." They learn it from games, movies, satellite photographs, globes, the history of ships and airplanes, of cloth and houses, of the Okinawan karate and of Roman bathhouses. Their model of the universe is better than mine was when I was their age. Their confidence is better than mine is now! They are learning about THEIR planet. I felt like an unwelcome guest here, when I was "just a kid." They feel like natural residents of Earth, and they do know their neighborhood.

You Could Grow Up to be President

Holly in England at age 13

Holly in England at age 8

Lake Titicaca is shorter and less glorious, but I mentioned it in the article above, which was originally in a print magazine where links didn't work.