Original notes from when I put the letter online in 2001 or so.

My scan of the letter itself, of the envelope it came in, the photos and the newspaper (some of the newspaper; the David Bowie parts).

Letters of Note blog finds and links it (December 2, 2009) starting all the rest of the attention.

I found out the letter had been put on that blog from getting e-mail from Dean Murray at Rex Features, in London, asking for a photo of me when I was 14, and for permission to use the scan.

I mailed the packet to Holly, who was staying in the U.K. with James and Julie Daniel and their young son Adam. James and Holly made an appointment to take the packet to Dean Murray, so the contents could be professionally photographed and scanned for posterity. (My $80 scanner is not all that great, though my images are linked elsewhere on this page.)

It was a pleasure meeting your daughter Holly, she was great and livened up what is actually a quiet office here. It's amazing how much she looks like you when you were 14! :) 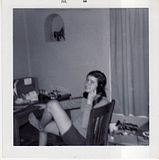 That first photo is the very summer I got the David Bowie letter, after my cousin Debbie (at the right) gave the promo albums she didn't want to our cousin Nada (third in the photo) who gave her rejects to me. The one who doesn't look like my cousin (Max Rasamimanana, of Madagascar) had nothing to do with it. He was working at Ghost Ranch when we went to 4-H camp and we invited him home. He was a student at Wooster, working at Ghost Ranch for the summer. David Bowie's First American Fan Letter And His Evolving Views of the U.S. (1967-1997) (article in December 2012)

January 6, 2010, at the Santa Fe Unschooling Symposium, I showed Carl and Kathryn Fettroll my whole packet, which Holly had just brought back from England, and which I was going to use for Show and Tell on Friday night. Carl noted, from the letter, that Friday would be David Bowie's birthday.

December 8, very early morning, when I needed to make breakfast for symposium attendees, I got an e-mail from Dean Murray with links to three online article (which I looked at briefly) and scans of two newspaper articles (which I looked at later that day). Daily Mail
The Mirror The Sun

(click to enlarge)
This added greatly to the value of my Show and Tell.

I was commenting on someone's drawings of David Bowie and told her about your letter and linked it for her. She said:

"Being a pathetically big fan of his for the past decade, I know that letter very well. XD It was even republished in a newspaper a few months ago. Floods of nostalgia came back."

So your fan letter has fans.

This interview was missing for a few years, but was tweeted 1/8/22, which would've been Bowie's 75th birthday.

Music legend David Bowie was born on this day 75 years ago.

One of Bowie's first U.S. fan letters came from a New Mexico woman who @KaiPorterKOB talked to shortly after Bowie's death in 2016. pic.twitter.com/xvhZ8AVYqo

Letters of Note, which first brought that letter to the attention of people beyond my friends-of-friends, also reposted it in 2022: I hope one day to get to America— David Bowie excitedly responds to his first American fan letter
Here's where I clarify/correct their intro. Daily Star article

They didn't leave the video there, but I had noted on facebook this:

The text with the KOB article misquoted me a little, at first. I thought I might need to live with the misquote forever, but here's what they changed it to, at my request:

"I thought that is probably one of the best things that people could read on that day, on a really sad day, is a sweet letter all full of potential, and hope, and youth. I thought it was a perfect tribute, for people to be sharing that letter,"

(There was a "kind of" I've left out, but otherwise it matches the video better.)

If that one is gone, it's at 4:11, about halfway through, here: https://www.youtube.com/watch?v=FjN4pxvWRxI

February 2016, City on the Edge podcast, interview of me in New Mexico

May 23, 2016, an article on the BBC website described the letter beautifully. Quote, my commentary, link