Someone wrote:
"I honestly think IF mom can push through the negativity and get to the other side sooner than later, keeping her kids home could be a wonderful experience for all."

I wrote:
Is "push through" the best verb for that?

In the first Harry Potter book, Harry, Ron and Hermione fall through a trap door into vines called Devil's Snare. It grabs them and the boys are thrashing and fighting it. They're trying to push through.

Hermione tells them if they will relax, it will let go.

In the case of anything stressful or negative, I think relaxing is the best first move.

Often when people write that they are "battling depression," I point that out. Or "I am fighting my children over..." or "I struggle to understand..." something.

Some of that article:

Perhaps happiness shouldn't be the primary goal. Try joy. Try the idea that it might be enJOYable to cook, to set the table, to see your family, rather than the idea that you'll be happy after dinner's done and cleaned up. My guess is that such happiness might last a couple of seconds before you look around and see something else between you and happiness. Joy, though, can be ongoing, and can be felt before, during and after the meeting of goals.

Enjoyment—that word itself is hardly used. Enjoyment is seen nearly as a sin for some people. "You're not here to have fun, you're here to work." Why can't work bring joy? Any tiny moment can be enjoyed: the feel of warm running water when you wash your hands; light and shadow on the floor; pictures in the clouds; the feel of an old book. If you see an old friend that can bring pure, tingly joy for which there are no words.

If you practice noticing and experiencing joy, if you take a second out of each hour to find joy, your life improves with each remembrance of your new primary goal. You don't need someone else to give you permission, or to decide whether or not what you thought gave you joy was an acceptable source of enjoyment.

I'm not interested in helping people battle or fight or struggle. I want to help them find joy, gratitude, abundance and peace.

This has been such an incredibly powerful, empowering concept for me. It's a total turn around from the way I grew up thinking, from the way we think and speak in Western culture. But I have made the greatest strides in my own deschooling by learning to notice when I feel myself "struggling," and to Stop! Then I can choose to let go, to relax about the disparity between what I want and what is. And what I have discovered is that that conscious mental shift releases the energy I need to step forward mindfully into the moment...and then that moment becomes, itself, a step towards what I want, away from what I don't want.

Once a mom wrote:

"I would love some input from other parents who have a child battling anxiety ..."

Don't see him as "battling anxiety." If you see this as an evil to be overcome, instead of a reality to be accepted gently and peacefully, you won't move toward more peace.

That, and more about anxiety

In a public post on her page, Jen Keefe was writing about the problems with diets, and encouraging people to be calmly accepting. Part of what she wrote was this:

Eating an apple instead of a cookie is not morally superior. Its not a better choice. From what I'm learning, because of everything that comes with it, it's mostly not even a healthier choice.

Eating carrots and hummus instead of French fries and ketchup is not "good". Eating potato chips instead of kale chips is not "bad".

These two responses came, among others, but they were right in a row:

I so struggle with this ... and The ongoing battle.

"Struggle" and "battle" aren't morally superior to "relax" and "let it go."

They are not healthier. 🙂

Sandra- When I first read words like this (likely written by you but I can't remember how long ago) I don't remember if they clicked quickly or if took a long time for me to even make sense of them- to be able to even understand what they meant.

It's a gift, though- starting to understand this. I hadn't realized that I grew up in a culture where the more you struggled the higher your worth and the more you belonged. It's not because anyone in my life was a jerk or anything. It's just how it was. My family is strong Irish Catholic.

Because of the learning I've been doing about food and moral superiority I was able to read your comment with a new, better understanding...and whew. It was another whole level of exhaling and gratitude.

It's so much better to opt out of struggling and battling. It's just better. Everything is brighter and happier. Not less intelligent. Not less realistic. It's still intelligent, observant, and thoughtful.

I added that because I think I used to associate this idea with rose colored glasses, or simple, and others might too.

June 2018, a mom wrote for a public group that fear was assaulting her. In a conversation on the side, she used the term again: "sometimes fear assaults me."

Fear doesn't hit you with a stick in a dark alley.
Don't use the word "assaults."
It's too dramatic and it makes you a victim.

An additional problem, though, is that it also treats "fear" as something outside herself, that comes toward her and assaults her when she least expects it.

Maybe ALL the negative words are doing that—personifying, or anthropomorphizing an emotion as an external enemy. So some would say "it's just semantics," but it's a map of one's emotions that ranges outside the body and builds bad guys, I'm thinking.

"Just semantics" is a big problem

"I have hit a wall recently with my own anger and expectations and this is really where I need the solution."

"Hit a wall" is a violent image, and unnecessary. (and linked to this page, /battle)

Creating walls, hitting, anger and needs with words will wind your emotions up and make you feel trapped and whiney.

Most of the links above lead to placid, healthy, happy things. Sort through your choices so you can begin (and continue) to think and choose and feel the differences.

I hit a wall on Monday. Post surgery depression has hit with a vengeance. Lots of tears, pain is back up and feeling like I'll never get fully well. Trying to fight through it. (March 2017 fb)

I am struggling to find that peace, that calm ... (July 2016, yahoogroup discussion)

Mom has a hard time not thinking that her way is the best way. Trust me, we've fought this battle many, many times before. (December 2015, yahoogroup discussion)

sometimes she loved it, other times it was an uphill battle (February 2014, yahoogroup discussion) 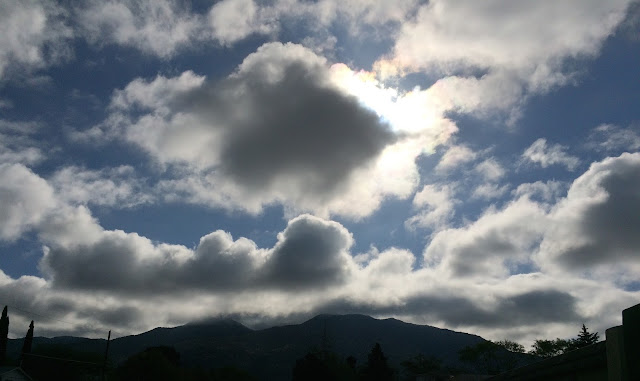 A family was talking about not giving many Christmas gifts and an unschooling mom wrote:

Sometimes I don't have the energy to put forth my own ideas on abundance, and sometimes I do anyway, but they look at me like I'm crazy. Do you bite your tongue or go into the fray with your beliefs?

Maybe neither.
Don't think of it as "a fray" (and don't MAKE it a fray by going in with counter-insurgence ideas. 🙂 )

It might be useful to just say "That's not as Christmassy as it could be." Something a bit cryptic but true that isn't antagonistic or challenging, but a simple statement that they might be near, but off, a better spot. That way you said something, but didn't challenge them to throw down.

-=-i really have to be vigilant on myself and try not to control.-=-

Don't use "have to." If it's not true, but you write it and share it, that means you thought it. When you hear "have to" in your head, rephrase.

No one will make you. You Do NOT "have to." You can control all you want to. (How much do you WANT to?)

Being "vigilant" sounds like absolutely exhausting effort. Relax. You do not "have to be vigilant." Especially not on yourself. That's you watching yourself. Way too much work. Let go of one of those selves. Relax inside the other one. Have a snooze. Don't be vigilant.

When you wake up, think. Am I glad to be here? Is this a good moment? If so, breathe and smile and touch your child gently. Be soft. Be grateful. Find abundance. Gently.

You don't need to control yourself to keep yourself from being controlling.

Make generous, kind choices, over and over, as often as you can.

Someone wrote: "this thread forced me to realize..."

Nothing should be forced. If you can think that it inspired you to see... (those things) or "this thread helped me to realize..." then your life will have inspiration and help, instead of "force."

It might seem like it doesn't matter, but it will build up. "Force" is stress—literally/physically and also emotionally.

-=-I think I have been wrestling with-=-

Such hard work. So dangerous and physical. Sounds like it was all wrestling back.

-=-I think I have been wrestling with the amount I have been giving to the kids and trying find a way to know when I need to take a moment (or more) to refuel. -=-

Thinking of it as "refueling" creates a false model. It's likely that you can find ways to renew, recharge, or calm yourself as the day goes on. Don't think of your children as a drain, and as something else as "refuel"

Some parents express their learning as "struggle" or "challenge," but those words are antagonistic. Try to relax, and try not to feel that you're wrestling (with your child's desires, or with your own thoughts). If you can find softer words, you will experience softer emotions. 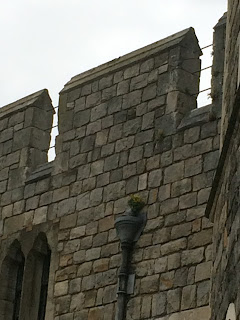 photo by Sandra Dodd, of a flowering plant
growing out of a rain spout
on a castle

The intentional spread of negativity

On facebook, March 2017—"art" encouraging people to feel beset and besieged was sent with this note:

You are a chronic pain warrior! Cry, scream, let it all out!!! You can do this, cause you are that strong! A big hug! xx 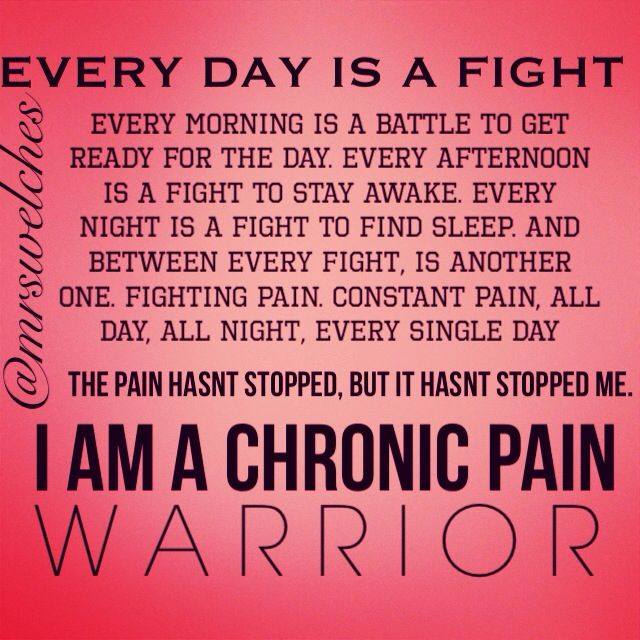 The response was "Yep that's so true at the moment. Thanks for the thoughtful post xxxx"

It doesn't seem thoughtful to me. It seems literally painful—full of pain.

The title was generated for free at cooltext.com, and I lifted the divider line by cropping from the title art.

The title art ended up being too wide, after a few years, so is retired.