One of the things I remember doing early on (and still sometimes do) to help keep focused on being a better parent, is to pretend someone is there. Like someone I respect from this list- pretending they were there helped me behave better early on, even when it was just so I wouldn't look bad to whomever I imagined.

Over time, as I have practiced "stop, think, act", and being more present with my thinking, I have imagined the ideas my "invisible friends" might share with me in those moments where I don't know what to do. It helps me to see that I have lots of choices- it's not only yell or not yell. That's a starting point, but to realize what else I can do right now and like Meredith shared, to also go back and see where things went wrong before yelling was in the picture. That helped me see even more choices I could be making to improve my response and be kinder and softer than I used to be.

Sandra Dodd, in the same discussion:

I did that early on with my favorite La Leche League leaders. I invited them early, into my super-ego, to talk to me when they weren't there.

Trying to keep their voices in my head made me remember that I wouldn't want to do things that would keep them from feeling good about my progress and their assistance.

I think it's the purpose of saints (imagery in the house or worn on the body) or amulets or other religious or superstitious objects. I mean I think it's natural and ancient, among people, to have absent witnesses. The feeling that ancestors can see what we're doing is common in some cultures (and, honestly, ours—it came up at my house on Tuesday at a memorial for a dead friend, even though most there were atheists; it can be soothing, and inspiring).

I used to pretend I was on a tv documentary about being an awesome mum.

Transcription (by Marta Venturini Machado, slightly edited for this page) of part of a presentation by Sandra years ago:

[It helps] to have other people around to model. Either hang around with a family that you respect, and see how they are with their kids and try to be more like that. Or even in your imagination, if you want to envision, depending how old you are going to be, Ozzy and Harriet if you're really old, or whatever nice tv family or literary family you want to be like. And pick one that you don't want to be like, that's a legitimate-as-all-get-out use for literature, to have some good role models and some cartoons to be avoided. You do not want to treat your kid like he's Oliver Twist. So Oliver Twist is your extreme at one end; that's not right. So get in your head some models and let that be your guide to be more like.

Another way is to get witnesses. That's one reason people join support groups and confess to their friends what they're doing, because you've told somebody what your intention is. You've told them what your problem is and what your intention is and now you have witnesses and for some people that helps. Sometimes it needs to be an imaginary witness, sometimes it needs to be a real witness. But maybe, if it will help you, imagine that the friend that you most want to impress is there and would you do it if they were there.

Longer quote, and the recording it came from: Parenting Peacefully

There is an unschooling-related incident about this story, and also a large version of the illustration if you click the image, but the text is this:

There's a Sikh story about a holy man who gave two men each a chicken and said: "Go kill them where no one can see."

One guy went behind the fence and killed the chicken. The other guy walked around for two days and came back with the chicken.

The holy man said: "You didn't kill the chicken?"

The guy said: "Well, everywhere I go, the chicken sees." 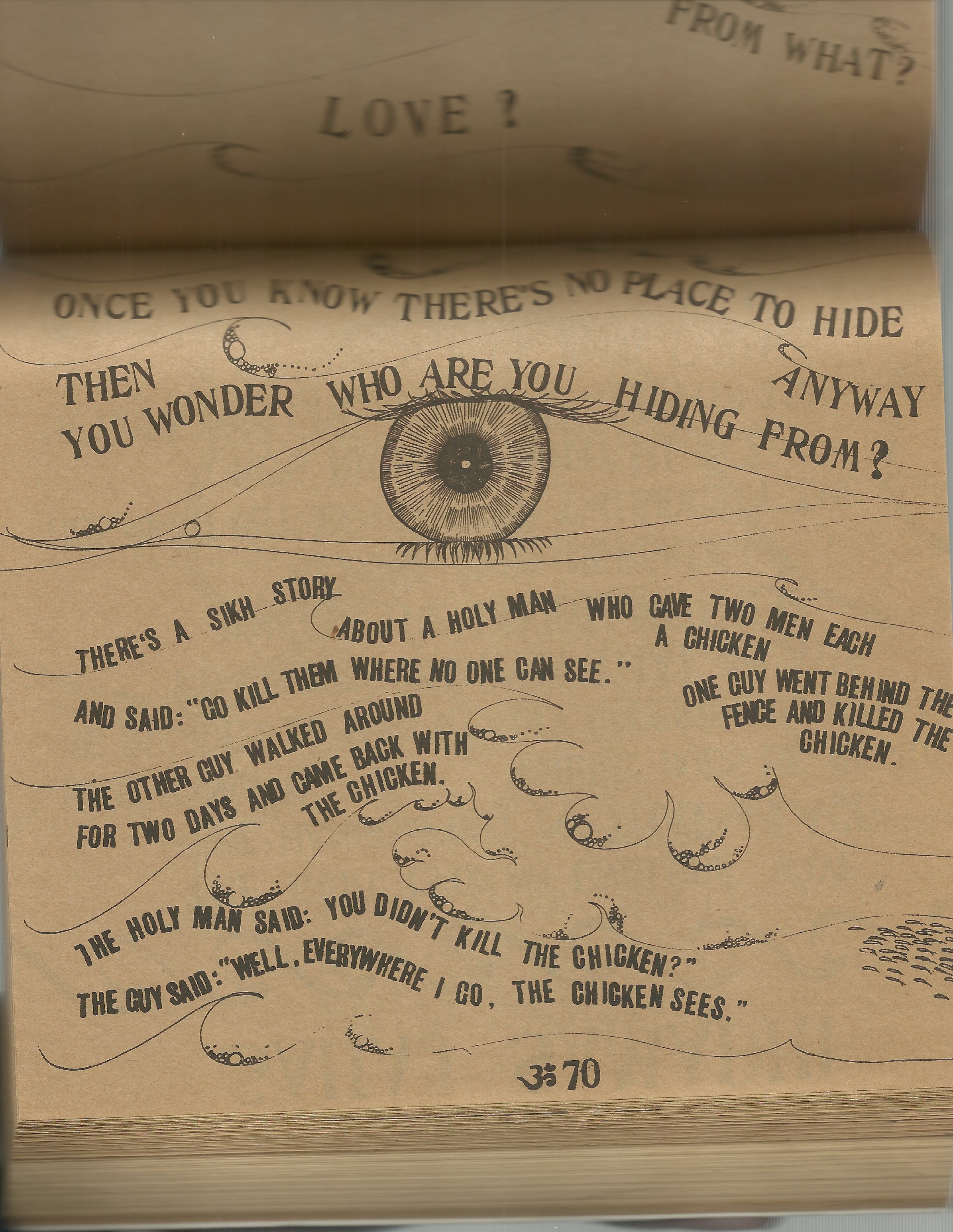 Being (because this is about a way of being)

How to Unschool (many happy takes on this)

Voices in your Head