Backup of the original post by Renee Cabatic. (If you go to the original, read the comments there.)

Life is Good and the amazing Schuyler Waynforth 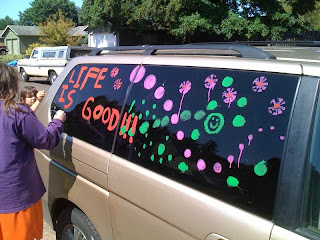 I started this blog about a year ago in response to attending my second Life is Good Unschooling Conference. I saw that blogging was a good way to communicate with other unschoolers and family and friends about this path we are on. It seems fitting to revisit this idea after returning from the 3rd Life is Good Conference.

The thing about Life is Good and Unschooling is so many other people have already said what I want to say and better that I just want to link their blogs and be done with it.

But there is something pressing me to be able to express this amazing transformation in my life and my children and my family. I am not trying to proselytize--it's been said before (I credit Sandra Dodd) and I'll repeat it here:
"Not everyone can or should unschool."

The water feels great (and to my neighbor who has twice told me she thinks I joined a cult--the Kool-Aid is delicious!)

Last year I attended a circle chat called Peaceful Partnerships led by Beth Fuller who also moderates a yahoo group of the same name (click here) The question was asked, "Do you assume your partner is doing the best they can?"

WOW....I had to admit I didn't ---I often assumed the worst intentions of this man I loved. And then the question that really rocked my world, "Do you extend the same compassion to yourself that you want to be able to give to your children and partners?"

I came away from that conference learning, growing and changing. Also kicking and screaming and gnashing my teeth as I inevitably do whenever self-growth is the agenda. In the weeks that followed Schuyler Waynforth posted this profound bit in response to a poster having difficulties with her husband, on the Peaceful Partners Yahoo group:

"At the Life is Good conference Beth Fuller led a circle chat on Peaceful Partnerships. In it she asked who among believed that everyone was doing the best they could with what they had in any given moment. So, I'm going to ask you that question: Do you think your husband is doing the best he can with what he has at any given moment? It is a really important question.

Or, maybe not, maybe it is just a question that really resonates with me.

I don't do it, I don't believe it, or I didn't. I wasn't among the hand raisers.

That question has been sitting with me for almost a month now (has it really been that long?), can I give people the benefit of the doubt to believe that they only and always are responding with the best they have in any given moment?

Part of it is that I can't quite give myself that benefit of the doubt. Well, maybe that is all of it. Maybe if I could believe that even in those moments where I am the least of what I want to be, I am doing the best that I can with what I have, maybe then I can extend that trust to other people.

Right now, in front of the television, there are a slew of origami papers and markers and paper dolls and other bits and bobs from Linnaea crafting one or another thing. As I peer closer I can see a bird she made and drawings she's drawn and planes she designed as toys for the kittens. I will probably go over and tidy it up in a little bit, to keep the pieces safer from folks walking around and to make sure that there isn't food for the ants.

It takes only a moment to turn what you describe as rubble into a series of activities, of joyous moments. They are still-lifes waiting to be interpreted. I can see the shadow of her sitting there and doing and making and talking and turning to Simon to show him or running to fly the plane she made in the hallway to see if it would fly well enough to engage whichever kitten it was designed to amuse, or calling to me to come and interpret whichever fold the origami book was describing onto the paper she was folding.

It isn't rubble, it is her life.

I've gotten in social hot water for being to forthright about my feelings about parenting and food, largely. The potential cost for my social faux pas was to Linnaea and to Simon and not to me. Because of that I've worked really hard to change my perspective and thus my approach.

One is to recognize that I'm not all that concerned about the parenting, more about the child. That means I can be generous to the child without worrying about what their parent is doing, or at least not so much. It may not seem to make a lot of difference, but it kind of cuts them out of the picture. It allows me to worry less about the parenting and just be the adult I want to be when interacting with the child or children.

The other thing that helps is to recognize how lucky I am that I get to do this life. I know that it's not just luck, it's a lot of work and thought and reading and breathing and patience and curiosity and exploration. But I have a life where I can be home or out and about with Simon and Linnaea in ways that so many other people I know just don't seem to be able to manage. And while I am sure if this life was something they really wanted they could achieve it, it is still because of all the wonderful gifts in my life that I am able to do this. It helps a lot to see my life as this wonderful joyous trip that I'm on.

Sometimes I screw up, some moments I suck and grouch and say the wrong thing at the wrong time. Who am I to throw stones at glass houses? I get to live with my choices and so do other parents. I try and limit my expression of opinion to appropriate forums. Here is great. Here I'm asked what I think and for help and advice. In other people's homes and lives and company I don't have to be on call as an advisor. And when I'm asked for advice, I need to take it with a grain of salt, and be prepared not to have anything that I say be taken more as a momentary conversation.

I wrote her this bit:

I met you briefly at Life Is Good and then again at Mary Gold's house and went bowling with you and your family. My name is Renee. I come with Xander, XuMei and Chris (spouse).

I want to tell you how much your words (quote from Peaceful Partnerships) meant to me this morning. They are perfect and I needed to hear them (again).

I have been reading several message boards/unschooling groups for the past year and I know you from your posts. Thank you for putting yourself out there, for admitting that sometimes you are "the least of what you want to be" (this is so helpful to me right now as I am being the least of what I want to be). And reminding me of the key element I came away from the conference knowing----I must extend the same compassion to myself as I expect to extend to my partner and children. Somehow in the jumble of life I forgot.

And she wrote back to me:

Oh, yay! Of course I remember you. I was just, today, sitting upstairs on the bed looking through the Life is Good directory and seeing you thinking about Chris' dance mat gliding. And wondering about your secret blog. And thinking about your fantastic smile and how you danced at the barefoot boogie and your recharge time. Many things, all at once.

I'm glad that what I wrote meant something to you. It means a lot to me to get to write it. It makes it feel more concrete, more directed, more future making of the now, if you know what I mean in my lack of clarity.

Let's try again, if I write it, somehow, it becomes a truth that I want to maintain. There we go. By saying it aloud, by telling 196 (or how many members there are of Peaceful Partnerships) folks how I feel, I become obligated to try and make my words and my reality coincide. I like that sort of accountability.

Thank you for writing.

So that brings me back to the reason I want to be able to write about unschooling. Even though I am on a path and changing and questioning all the time, "if I write it, somehow, it becomes a truth I want to maintain." I want that sort of accountability too! 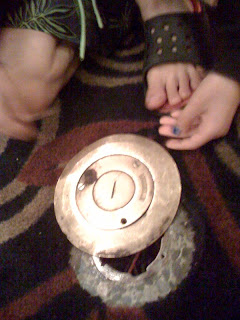 Xander finding electrical wires in the floor of the Hotel lobby at Life is Good. Connections, making connections.

End of quote; the original might still be there:
Life is Good and the amazing Schuyler Waynforth

This is backup of the text of a post on Renee Cabatic's blog, in case that disappears. Also, about blogs, sometimes the formatting fails, on older posts. I've added some pararaph separations below; some I know used to be there because of spacing, and others I'm not positive.

The yahoogroup "Peaceful Partnerships" is also missing from the world. Yahoogroups decided not to maintain the archives of their once-thriving groups, in 2019.

Schuyler let her own blog go, too, since those days. Unschoolers' blogs were wonderful conduits and resources when they were new and busy, though!

[end of the notes about the backup]
more by Schuyler Waynforth

Having a witness (more about the idea of accountability)