Some problems with respect

I just wanted to point out the mere importance that this stuff has in my life. I am not kidding, I feel like my life has changed.
There is always a lesson awaiting us to learn it. then, I have realized that I got something really worthy from your column, I would call it wisdom.

That seems nice. It's "supportive." It was pap and spam from "Viagra Online," posted on half a dozen different posts on my site news blog.

Elsewhere recently someone who actually is an unschooler, and someone I've met, wrote (along with some other reactionary and defensive things), "I have lost all respect for you." But neither of those is really about respect or wisdom, or what is life-changing or worthy.

If someone fawns and says "OOh, I really respect you," but isn't being a very good person, or isn't being honest or respectable, the respect isn't worth as much as if someone *I* respected from experience and observation respected me. They wouldn't need to say it. It's not about words. It's about respect.

Respect can be shown sometimes by being quiet.

Sometimes it can be shown by thinking about what someone says and not dismissing it half-heard.

When I respect someone, I praise and defend them in their absence.

The people I respect most have become little voices in my head, and I "consult" them when I'm making decisions in their specialty areas. I have friends who are more patient than I am, more generous with time, and I think of them clearly and try to emulate them when I am making choices in those areas. Some cook better and are more organized, and I think back to things they have said, or to things I have seen them do, or I try to induce in myself the presence and mood they have when they're cooking or straightening. I don't want to be them, but I want to be more like them in the ways they have that earned my respect.

There are people who awkwardly indicate that they would respect me more if I would change my own way of being, or if I would "support" them uncritically, or if I would state in public that their ideas were as good as ideas I actually DO believe are good ideas. Some know they're doing it. Others don't. If someone's respect would be earned by my compromising my integrity, then

How do I know when someone respects me? How would I know "lip service" from real respect? The answer is a weird one. It wouldn't have made sense to me when I was young, in my 20's or early 30's. I grew into it, as people do. The answer is that it doesn't matter. If I become a person universally lacking in the respect or regard of other people, that will have happened because of choices I made. And I'm not aiming to become a person universally respected by all people. That will never happen to anyone. There was some guy throwing a great rant about Mother Teresa not long ago because she was given medical equipment and a computer system or something, and they never got used, and so (he ranted) people died. I'm pretty sure that when one runs a hospice, people are there to die. By badmouthing Mother Teresa, he hoped to gain respect. It's an odd choice to make and not a great use of time and energy.

If I live my life by making the better choice, and by making conscious choices I am willing to defend, I will be in a place of moral and ethical strength. What is that good for? It helped create a space in which my children could grow up confident and safe. It helped my marriage last a long time (over thirty years together; over 25 married thusfar). "Being good," making choices by deciding what is better and what is worse, is good for being good. It is its own reward. If no one sees or notices or cares, I'm still by my own measure a better person.

In February I'll be speaking at a marriage conference in Bryn Athyn, Pennsylvania. It is organized by Lori Odhner, who was one of my first two La Leche League leaders when Kirby was a baby. I have respected Lori since 1986. I don't know if I ever told her so, but she didn't need that. She lives a respectful and respectable life. I'm glad I've learned enough about marriage and families to help her with a conference, because her knowledge of mothering and babies helped set me on the path to the place I am today.

Respect has been something I've thought about since I was little and I loved my teacher in ways I didn't love my mother. I thought about that, and why it should be so, and whether it was a sin, or made me a bad daughter. From then on, I looked at the world in terms of who was earning respect, and how, and who was losing it, and how. I didn't talk about it much, though.

Eventually, I joined the Society for Creative Anachronism which was built on a solid base of knightly virtues and moral ideals. Some members of that group don't care about such things, and I don't respect that. If they in turn say I'm not sufficiently fun and so they don't care what I think, their lack of respect for me touches me not.

Perhaps the kernel of respect is "I care what you think."

It's relative. People who think the SCA is a waste of time altogether will have zero respect for my costumes and scrolls and photos. Those who are adamantly in favor of public school have no respect for my unschooling knowledge and activity. I don't respect my nextdoor neighbor, because she's mean to her dog when her relatives aren't visiting, and kinda smarmy fake-nice to the dog when they are there. But she doesn't care at all what I think of her relationship with her relatives or her dog, I'm sure.

There are people I respect. My respect isn't what makes them cool, though. My respect only makes me respectful of things I value. Courage, honesty, service, compassion, integrity, humor, musicality, artistry... different combinations in different people. 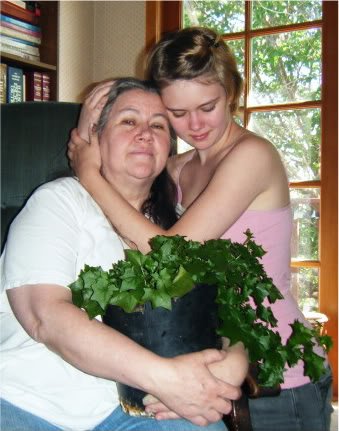 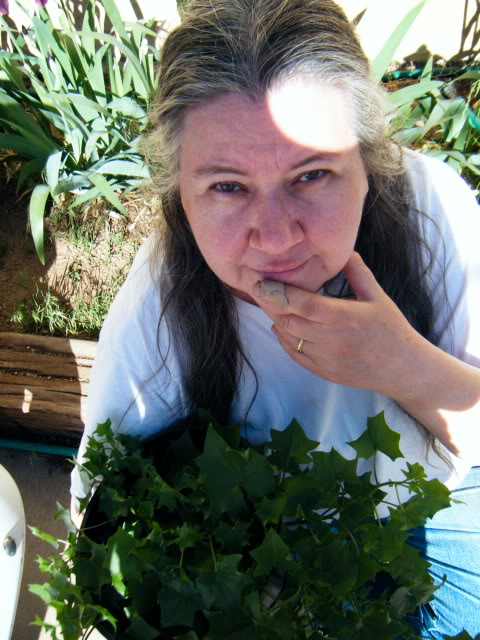 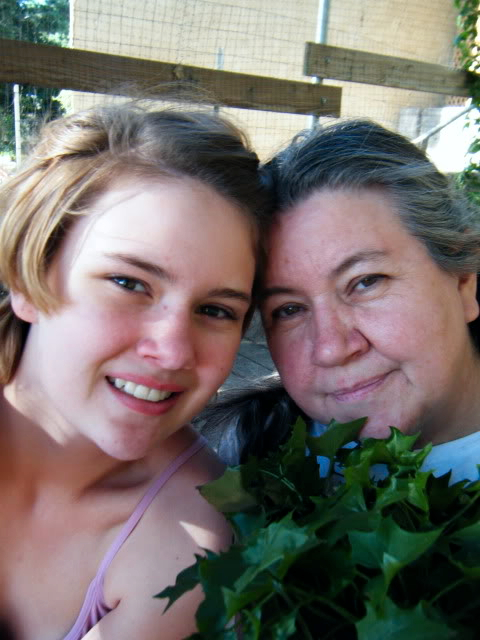 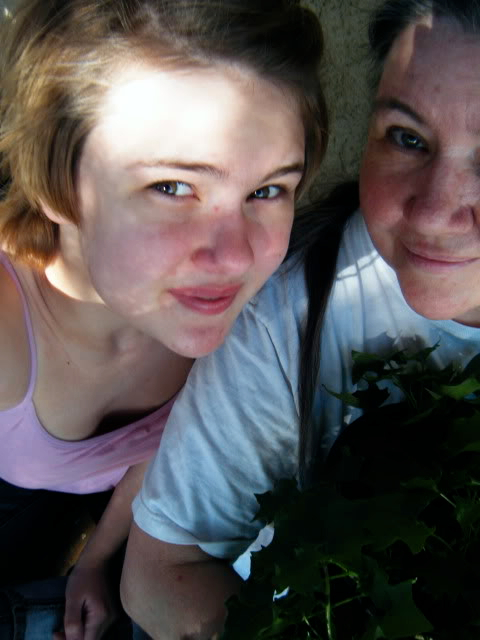 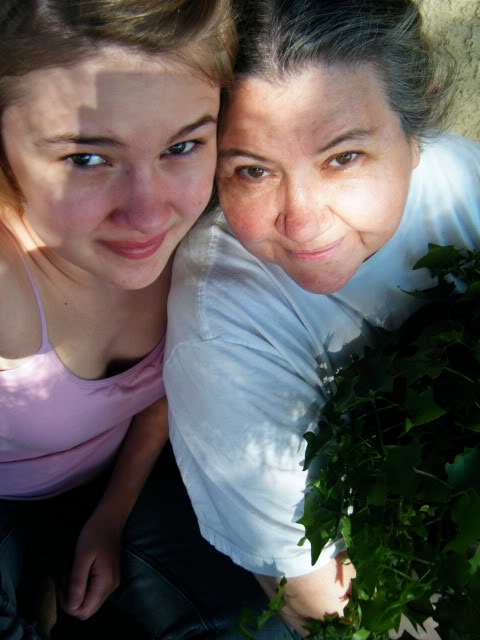 The story of this ivy and why it was photographed is at My Ivy on Mother's Day, May 2009.

These ivy photos were taken by Holly, on a day when we had argued over hurt feelings, and both had cried. I wanted her to take the photos anyway, fearful that they might not be taken if we didn't do it then. I had confidence in and admiration for her ability to get good images with a camera on a timer. She knew it was important to me to have those that day, and so we calmed ourselves and did it. There's something about respect in there, and reliability.

SwissArmyWife (Heather, on her blog) had a post recently called "My kids listen. Do yours?" If you're going to read the whole thing, click the link now. If you're undecided, here's a glorious part:

Last night part of the unschooling chat was about respect. A couple of things I wrote are worth repeating:

The other part was that Andrea wrote that the respect she thought of was esteem, and it seemed "respect has to be earned" didn't apply to our children. She wrote "I want to be worthy of my children's esteem, not just social/hierarchal deference." And without seeing that, because the chat was moving VERY quickly, I wrote:

I love my children and think they're really important, and that it is part of my privilege to be their mom and to introduce them to the fun and interesting parts of the world, and I hold them in esteem. They are of higher value to me than other things and other people. That isn't respect they had to earn. But it's emotional and it's attitudinal, and it's relative to me.

Esteem has to do with estimation, with judgment. None of this is easy, and any quick reference to "respect" stirs up all of that depth and confusion.

Respect is not something I can fully clarify to myself or to anyone. It's like exploring in a box of old jewelry. It's a jumble of emotion and virtue and ethics that I have enjoyed examining and untangling for many years. I see different chains and jewels different times, with their connections and their histories.

Different aspects of respect, relating to unschooling, are here: SandraDodd.com/respect
The writing above was originally on my blog, September 16, 2010. When I moved this writing here in 2017, I looked for the chat from September 2010, but couldn't find it. I'm glad I saved some quotes then. I might find it yet, someday.
Respect