Words and photo by Belinda Dutch:

My teenagers who don't always find it easy to "hang out" together, sharing the fire. Dog is just out of shot. Louis is watching an instructional video on a game made by a friend and Olly is watching real people jumping horses.

I realised that this would normally be interpreted grumpily as "today"s teenagers always plugged in, should participate in the real world more,— and instead I relish it as "my teenagers peacefully hanging out together and with me, while following their passions and engaging with the world."

Thank you for helping me see that! And if you ever want to use the pic you are welcome. 🙂 It's nice and wintery. 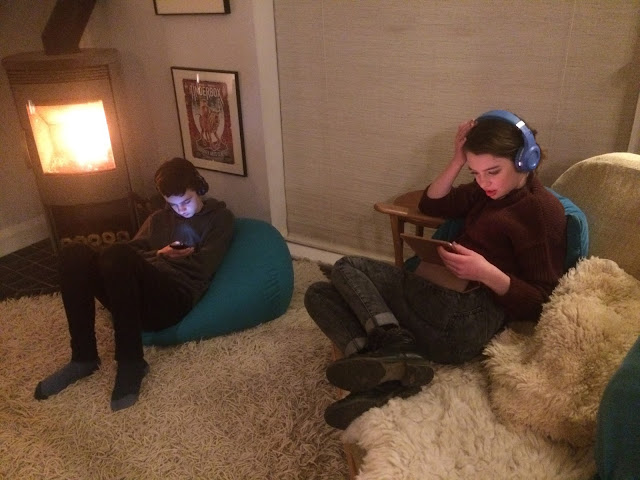 YES!! Over the last few months, I am finally coming to this new awareness in a real way (as opposed to training myself to rethink/fake it until I make it).

It's taken a LONG time. But coincidentally, as I've sunk deeper into this awareness of what's actually there (replacing a mindset of abundance with my former belief about what was lacking), my kids "melt into me" more...what I mean is there is less edginess, less defensiveness, and more willingness to share their life with me. More willingness to join me in what I'm doing.

They are 8 and 6. Maybe a part of the change is their getting older; however I'm so grateful for this shift because I'm sure that my acceptance has something (a lot?) to do with the peace that we are experiencing. 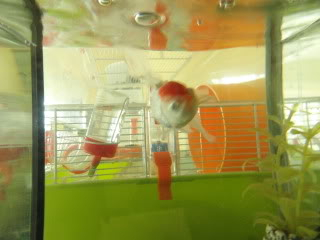 The same person can see the same thing more than one way. With practice, you can see things different ways without even moving. In terms of thought, perspective is no more than "seeing" something from a new angle.

This was written at Christmas, 2014, by a regular contributor to the discussion who doesn't want her sister to find this, and so it was made anonymous.

Last night, my sister's family visited for Christmas Eve dinner. I had a plate of sugar cookies out as part of the evening's food, and her children and my son both had two cookies. My son had also had three cookies just before they arrived—I know because he had asked "if I eat three, will we still have enough for company?"

My sister's children are not allowed sugar except on the most rare of occasions (including Christmas). When they do have things with sugar in them, it's only after begging their mother "Please, please can I have one?? Just one?? Please!!! I won't be crazy—PLEASE!!!"

Last night, in order for the 6-year-old to Earn the second cookie, she had not only had to beg and promise—but she also had to choose one protein item to eat first. The child didn't want a protein item and said so clearly ("NO I don't WANT to choose a protein—and especially NOT cheddar cheese!!!"). My sister persisted, and the child finally chose a small piece of Colby Jack cheese, and the biggest cookie she could find on the plate. The other child wasn't required to have a protein in order to get a second cookie, apparently because he ate a plate of white rice with soy sauce—and that was deemed sufficient.

After they had their cookies, despite promises to the contrary, they indeed did go quite crazy with happiness—they were bouncing around the house, running down the hallway, and being very loud. My sister told my mother in a loud enough voice for everyone, including the children, to hear, "I shouldn't have let them eat the cookies."

Instead of joining that conversation :-) I asked the kids to slow down, and suggested we open presents (so they'd have something to do besides chase each other about :-)). They excitedly tore open their gifts, and then expressed immediate disappointment that they had not received more. The 9-year-old announced loudly that next year, he thought people should buy many more things, so he'd have more to open. The six year old said "that's it??"

My sister shrugged her shoulders and said flatly, "It's the sugar."

Despite all the sugar he'd consumed ;-) my son (who'd had more cookies than his younger cousins) had not been running all about or screaming, and was not complaining about his presents. He was happily chatting with people, and opening one gift at a time—thanking everyone for what he'd received, and then playing with what he'd opened. When he heard my sister blame the sugar for the way her kids were acting, he whispered to me "somehow I don't think it's the sugar— I think they're just really excited but they don't know how they're supposed to act about gifts and parties."

I don't believe for one second it was the sugar making my niece and nephew crazy. :-) I think they were excited to be at a family gathering, excited to be allowed to eat a treat that they are normally denied, and left without coaching on how to calm down in a big group of people, how to say polite thank-yous, and how to think thoughts without saying them about "not enough" or "wish there was more." I think they were feeding off my sister's fears about what sugar would Do To Them, and that was revving them up even more. I think they love opening gifts (since gifts are also holiday-and-birthday-only things in their lives) and they didn't want the opening of them to end. I think if sugar were the demon responsible for their behavior, my son would have been at least a little crazy since he'd had more—and he didn't balance it with protein til much later in the day.

*Or* instead, someone—everyonex—could help their children enjoy treats, enjoy parties, and enjoy presents without looking for demons in the food, or the air, or the water, or anywhere else. That'd be pretty cool.

Maya wrote a retrospective on ten years of unschooling which included:

There are so many struggles I hear other homeschooling families talking about that we have completely avoided, and with barely any awareness of doing so, just by applying the principles here; the food control struggles, the sleep/bedtime struggles, the video game/"screen time" issues, the "trying to get them to do their work/chores/workbook" issues. Man, all I can think when I hear moms ranting about these things is what a waste of time. 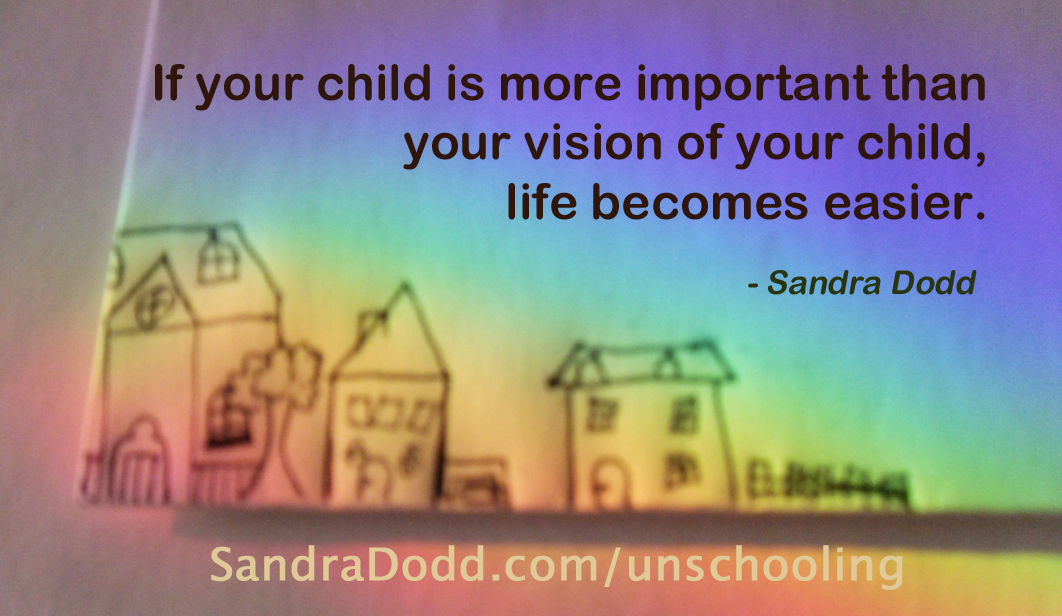 February 2014, on Radical Unschooling Info, about consumerism and Lego and related ideas:

My guess is that kids who grow up having been denied things they were passionate about because of their parents' abstract (to them) values end up needing/wanting a lot more material stuff than those who grow up with a sense of abundance and generosity.

It's abstract to other adults, too, outside the frenzy and fury of the political rally (whether in person or online). For example, water use in homes, in Albuquerque. There are businesses running water all the time, the Intel factory got an exemption of all water-use policies in exchange for hiring a bunch of locals. Philosophically, morally, probably humans shouldn't live in deserts at all. I could get us all depressed about it, but that's not good.

There have always been people living in places it didn't seem humans should live. :-)

The "turn off your lights" reminders and such make individuals feel better more than they "save the environment."

Lego is manufactured whether you buy it or not. And kids learn like crazy from it, and their imaginations are stimulated all kinds of ways.

This is from a discussion in 2013. Jacqueline Harakis wrote:

I loved and saved the thread that bore that wonderful quote by Sarah Dickinson; a reply to my boycotting Nestlé and how I can unschool and continue:

"Buy them if they ask, if they like them and want more then you can experiment with alternatives you feel more comfortable with.

But ultimately if M&Ms are your child's favourite then prioritise that.

You stamping your foot is like a butterfly to Nestlé but like an elephant to your children, so don't squish them. (—Sarah Dickinson)

My update: I care much more about my relationship with my boy than for any political standing. I bought him a Nestlé icecream he chose out of an icecream van on our last hot week in London this year. I enjoyed watching him eat it as I imagined the very different outcome had I said no.

A page of tales of reconsidering priorities in light of being an unschooling parent.

Seeing changes by looking back, and looking around

Living by Principles instead of by Rules

Thinking About "Have To"