On Just Add Light and Stir, in February 2022, I posted this: 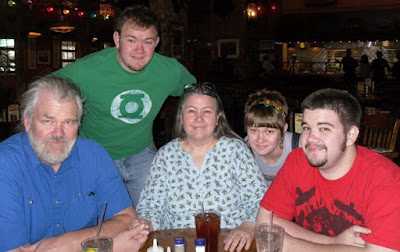 When a family stays together, and when the marriage is improved and solidified, it's not just good for the children. It's good for the grown children, and grandchildren. It's better for holidays and family events, for estate planning and inheritance. It's better for being able to leave photo albums out, and photos of children with their parents still out on the wall, without trying to revise history to keep from offending new wife, new husband, girlfriend, boyfriend. It's better for casual stories like "Remember when we went to White Sands?" It's less likely that a story will need to be abandoned midway or trailed away from because someone who was there, and fun, is now estranged from the family.

SandraDodd.com/positivity
photo by a waiter, with my camera, 2011
P.S. Why is that controversial?

I have been criticized, over the years, for encouraging people to be kind and compassionate to partners or spouses. I have also been thanked by people whose marriages became stronger because of those ideas, or by the use of unschooling principes in general.

Although I am sympathetic to people whose marriages have failed for reasons beyond their control, there are divorces that could have been avoided, and there are relationships still in the future that could benefit by being bathed in sweetness and patience, humor and positivity.

Three days later, this came up in Facebook Memories, from my own fb page in 2013:

I was being discussed on someone else's page, without being named, but now someone's named me, so I want to clarify a few things.

I do remember seeing something about divorce and unschooling not working a few years ago on Always Learning and it was one of the threads that turned me off of forums. However I know personally a few single parents by choice or who have lost a partner to death and they make unschooling work beautifully. I wonder if the same attitudes are toward them?

Sometimes in a divorce, from spite, one parent will prevent the other parent from homeschooling in ANY way. If the parents can't find a workable compromise, then a judge gets to say what will happen with the children. All the positive regard of all the unschoolers in the world isn't going to keep a judge from making the decision he wants to make. Once the courts get involved, unschooling is not as likely to be an option.

I've never asked someone to shush for saying "I'm divorced." I have asked people not to encourage divorce, and not to shush *me* on my own forum when I'm stating that it is in the possible-to-likely range than an antagonistic divorce will not lead to peaceful unschooling.

A friend without children shared it, and wrote this:

I gave your books to a lady from church who had to send her kids to regular schools after the divorce. She was so sad.
I'll let her know she's not alone in this.

Some of the comments there in those days: And your support and words have made me see how by me nurturing my marriage turned my family, marriage and home in a much sweeter and peaceful unschooling life! (by a foreigner, Alex P. 😉)

I wish I had known things like peaceful partnerships and Languages of Love and had sought more information 4 years ago before my husband decided to walk out. Unschooling has been a huge sticking point for us and I've been trying to find a middle ground between unschooling and his way which is almost 180 opposite. It's been more than difficult than not and a constant struggle here with threats being made on his part. I encourage people to work towards a peaceful partnership.

I am divorced. We were unschooling before my divorce. When my ex tried to make it an issue during the proceedings, the judge saw it for the ploy it was and would not allow him to do that. I fully realize how lucky I was in this regard however.

At first I had a typo on "endanger", and someone wrote: I like the word 'enanger'. "People don't need encouragement to enanger their marriages" So true.

My response to that: You're right. Even though I had meant to try to write "endanger," it did end up being a pretty useful and workable word: "People don't need encouragement to enanger their marriages."

People: Please stop enangering marriages. 🙂 It's a danger to them.

Sandra your thoughtful stance on marriage and peace within families has been invaluable to my family. It is in the thoughtfulness of making small choices of being kind and moving in a positive direction within relationships that brings peaceful lives. I grew up in a large family with separated parents and lived thru siblings with dissolved marriages. I experienced too much loss and I wasn't even the child. I agree that if people can choose to work things through thoughtfully it may prove better. It does require thoughtfulness.

Some further clarifications from me, there:

Another (sort of) question from the other discussion that I can respond to:

-=-The part I don't understand in any of this is, what part of "homeschool support group" has anything to do with unsolicited marital counseling? My groups (and we had a few since the military moved us often) didn't touch that area with a 10 ft pole. But we didn't stay long in fundamentalist groups. Maybe that's the difference?-=-

It's not about fundamentalism. It's about the kind of environment that helps learning happen. Over the years, in those discussions, many people have said that the same skills they were learning about making careful decisions, and patience, and compassion, helped them be better parents AND better partners.

It's not "unsolicited marital counseling." It's encouragement to maintain a peaceful nest. sandradodd.com/nest
(Most of those writings, and these below, aren't mine, but I've saved them and shared them back out.)

If I care more about the peace of children and the potential of unschooling than I do about "supporting" divorce, I don't think I should apologize for that. There are billions of people in the world. Not one of them is dependent solely on me, not even my kids, not even my husband. If the day comes that nobody wants to discuss unschooling with me anymore, I'll surely find something else to do with my time. 🙂 If people DO want to talk about unschooling, in a serious in-depth way, whose permission should I need to ask to continue to do that, as I have been doing since Kirby was four years old? I have three grown kids now. I don't think I owe anyone an apology for sharing what I've learned, and am still learning, in all these years of discussions.

Someone did name me right out, but it was also a misrepresentation:

-=-The idea that divorce will mean a loss of unschooling is an idea I've seen advanced by Sandra Dodd.-=-

I have never said "WILL MEAN A LOSS." I have said "can prevent." I have said that it might not be possible to unschool after a divorce, and that's because I have seen families in which unschooling did not survive after the divorce, for various reasons. I've said that if a family can remain intact, it will be better for unschooling.

The idea that divorce will NOT in any way risk a loss of unschooling is a cruel falsehood. To tell someone "Don't worry; you can unschool after a divorce; divorce is no problem" is just not true in any way. Even if the personnel didn't change, just remained the divorced couple and nobody else, the non-custodial parent still has a say in education. But personnel multiplies. There can be a judge. There can be social workers, there can be the mom's new boyfriend or husband, and the dad's new girlfriend or wife. It's not over when it's first declared "over."

Although I am being accused of "shushing" people because I have (two or three times) asked someone not to be cavalier about divorce—not to encourage someone to be negative about her husband in a discussion, I think of that as maintaining a positive tone for the sake of those who have come there to discuss unschooling. Encouragement of ANYthing that can prevent the heathy growth of understanding of unschooling is off topic on Always Learning.

Always Learning has moved, but still exists in 2022, as this page is being created.

Even before unschooling starts, divorce can prevent it.

In the 1990s, my phone number was listed, without anyone asking me, in a book in every library in Albuquerque and surrounding towns, as the contact person for unschooling. I would get calls from moms wanting to know what they needed to know or do first. Those calls continued for over a dozen years, tapering off in those last few years.

One of the first questions I would ask was whether she had a hostile ex-husband. If the answer was yes, I would recommend homeschooling with a curriculum, at least at first.

Even when people are motivated to understand unschooling, and are happy and hopeful, it takes years to fully grasp and relax into it. When someone is hostile or resistant, it can't begin to be understood.

Social workers and judges are very unlikely to even try to understand it.

Twice I was called by very sad mothers in other states, asking me if I could testify as an expert witness in a formal divorce hearing. I couldn't. There is no "expert" status in unschooling because the legal system will want to see degrees or certificates. They're used to doctors or researchers being "expert witnesses."

There is another reason I couldn't have, though. EVEN IF by magic I could have transported myself to that hearing and been accepted as a witness, I couldn't testify that unschooling could work well with those people, in that family. Apparently, it was NOT working very well because it was a factor in a divorce or custody consideration.

I'm still sad, deep inside, when I think of the fear in those voices.

Since then, I did serve on paper as a witness, for a family in another state. I had met and been around all of the members of the family, over ten years, and had seen them in three different states (some of them in four states), in various of situations—public, their home, my home, small, long weekend gatherings. There was probably not anyone else who knew more about unschooling in that family, and the family dynamics.

My testimony apparently did no good at all; the kids were put in school by the judge.

These are not happy memories or hopeful stories.   IF POSSIBLE, STAY TOGETHER. Make the marriage or partnership as strong as possible, as early as possible. I know it's not always an option, but I know that sometimes it would have been, if people had been more attentive and aware.
Becoming a Better Partner

Divorce (prevention of, for unschoolers)

The Importance of Partnership

Other good links were in the text up above—nest, and spouses, and parenting peacefully.