Outrage is not healthy for unschooling parents

It's not healthy for anyone, for very long,
but it works against unschooling.

Outrage is BIG, visceral, adrenaline-filled RAGE.
If your "outrage" is any smaller, use a different word.

A better page for unschoolers might be Too Easily Offended?, which has a section on "outrage." But if you really did want to stick around the idea of being "outraged," here are some notes.

A phrase came along a few decades ago, on bumper stickers and t-shirts: "If you are not outraged, you're not paying attention." It would be interesting to comb out all the problems with that, but I'm just going to leave it here and let readers consider the difficulties that attitude could bring to an unschooling family. Others, too, but my focus here is unschooling.

Outrage is not a virtue.


Music is "Titans Will Rise" from composers/producers known as Gothic Storm.
I don't know what music the original cartoon had.
The images below are cut and pasted from a google search. The synonyms and definitions are from The Oxford Dictionary (online version, I guess) and were provided by Google right on the search page, so I'll leave that search link beneath them; perhaps you can get to it by clicking.

The etymology (word history) is of being ultra enraged. 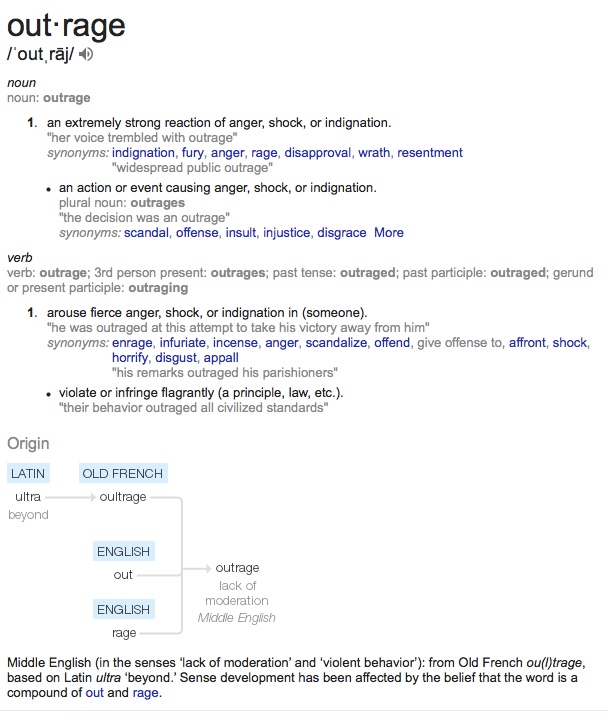 It was in style in the mid-19th century, when pretty much only moneyed and landed people were writing and being published. They liked to be outraged.

Then it wasn't much used, through the world wars in the 20th century. I think perhaps outrage might be a luxury of peace and plenty. When there are immediate problems, other emotions and expressions are more appropriate.

It's also possible that people are NOT more outraged, but that it's a Pokemon term, and the name of a movie, and that some of the usages picked up for statistics are not by or about outraged people.

A story about a site that caused outrage to make money:

A website that dealt in click-bait social justice stories has been exposed after having laid off over 20 employees. You can read the whole article at the link below, but I want to leave a few snippets here.

"Mic trafficked in outrage culture,” a former staffer who left in 2017 said....

“When I think about the role Mic played in growing that sentiment of moral outrage — and it then bleeding into publications that you think should have risen above it — it doesn’t feel good.” MIC’S DROP

How Mic.com exploited social justice for clicks, and then abandoned a staff that believed in it.

avoid Antagonism (Us vs. Them)