I have Joyce Fetterol’s unschooling “Toolbox"—which is basically quote cards to pull out for inspiration and to help open up stuck thinking. Every single quote has been written and included to help parents move forward towards better relationships with their child/children. The card I pulled out today asked this: 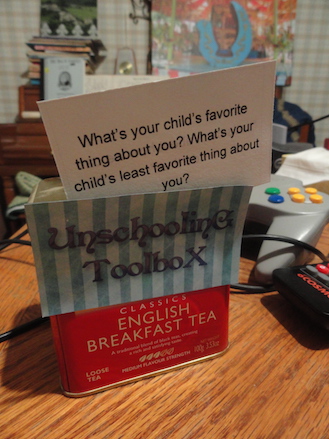 I had thoughts start to whirl in my head immediately on reading these questions!

Kes immediately asked me, "What did you just say wow for?" So I made an impulsive decision to just ask Kes outright these questions. I asked him first: ‘What’s your favourite thing about me? Without taking a beat, he said: “Oh do I have to pick one thing? There are so many favourite things! So many things I love about you!”

I then asked his least favourite thing about me.

”Oh I can’t think of any! Actually there is one, and I hope you don’t mind me saying it, but it’s your snoring! Definitely your snoring!”

Oh my, oh my! I can’t say how much this feels like SUCH an immense victory to me. I am so deeply happy and fulfilled by these honest and joyful answers.

I felt an immediate and deep sense of achievement and victory! I ran to hug him and kiss him, and had tears in my eyes. He felt the joy flowing from me so much and we hugged for a long time.

(The next morning he excitedly said ‘Lets do the cards in the box thing again!’ )

Nothing has ever made me feel better about me than the feeling that I was being a good mom. —Sandra Dodd

Some might say I’m reading too much into it….but hey, I don’t think so.

So why such a victory? Because three years ago I don’t think those answers would have been the same. That is what this is all about for me, THIS sweet victory.

I’m at the point on this journey now where I’m less focused on the absence of school aspect of unschooling. I’ve unpicked and de-schooled that area of this way of life a lot now (but of course it’s an ongoing process), and I find myself drawn more and more to the psychological aspects and outcomes of unschooling, versus the outcomes from a pre-packaged life and its mainstream parenting. I’m interested in how that plays out on our small people, whilst small, and going on into adult life.

Respectful parenting and parenting for social change is where my main focus is now, and of course radical unschooling is all those things and more. For me, that all begins and ends with being a good mum in the eyes and minds of my children, and going forward being remembered as a kind respectful and happy mum—someone they could trust implicitly, and who was their partner and friend.

Hopefully they will then carry that forward to how they treat their children, regardless of what the current trend is, or fears they have, or the current scaremongering circulating. Even if they don't have children of their own, my hope is that they treat and speak to all children that they come in contact with throughout their lives with the same respect and kindness that they afford their partners and friends, and that they treat them like the people they are.

Your children are developing a holographic internal image of you, complete with voice and emotion. The things you do and say are being recorded for posterity; make them sweet and good. What you choose to say and do now will affect what your children say to their children, and what your great grandchildren will hear after you’re long gone. Live like you’re their last hope. —Sandra Dodd

Partnering with my children and changing the paradigm in my family—that feels like the ultimate victory to me.

Kes often looks back and reminds me of things that upset him before the unschooling years (which I always see as great learning and reflection opportunities, but many cut deep…), so I know those answers could have been very different had I asked them three years ago. Things like: “Remember when you used to restrict and time me on the computer mum, or just come over and switch it off, and the TV? I hated that mum. It made me feel very angry and hurt. I just spent the whole time on there panicking that the time would soon be up, and I never got to relax or complete anything or learn anything on there properly,” or ”Remember when you used to make me sit on a step away from you when I did something wrong? That made me feel so scared and sad. So did sleeping alone in a room instead of with you and dad or Sam.”

He has reminded me of many more over these three years that used to deeply upset and frustrate him, and make him very sad and angry inside. They both have, and Sam’s reminders I find particularly heartbreaking and even heart-stopping on occasion (and difficult to write about, so I won’t). Especially now we are all safe and happy on the unschooled side of things, and they are not wild and crazy and running riot, and the world didn’t fall apart! (They are not violent psychopaths either, well not yet anyway… ☺ )

All the reminders from them are mainly focused on the controlling, the ‘no’s’, and the arbitrary rules that were constantly dished out, and the shaming and disrespectful ways they were treated and spoken to. Around food, it was mainly the restricting, drip feeding, and limiting of it. Set bedtimes, ”Even when I wasn’t tired mum.” The restrictions of what they could and couldn’t play/watch/game—that comes up a lot, especially now they are not the violent disturbed psychopaths I feared they would become from playing/watching them—in fact, so far from it!

'My Little Pony' and 'Terraria' are so often now the first choice to watch and play from a collection that includes GTA and Gary's mod. By allowing them to play those games, a very natural curiosity and need has been served, and freedom of choice allowed. Now, based on their own curiosity and needs, learning and flow have opened up in abundance! Ideas flow into old and new interests and discoveries, and the boys are not stuck craving and desiring the forbidden thing, nor dealing with the frustration and obsessive yearning and sneaking that can come with unmet needs.

Other reminders from them have been:

They have also both mentioned the eye rolling and huffing and puffing I used to be particularly good at, along with shaming comments said about them, and to them, and often in front of other people.

And how often I said ‘No.’ “You always used to just say no mum! To pretty much everything!”

Sam has said that he never felt like a person, a person with his own thoughts, curiosity, wants and needs. He said he never felt heard.

A friend wrote recently “Of all things that can and have been accomplished from this way of living, this one feels the most important.” She was referencing the closeness and connection between her 13 yr old son and his dad, the hugs and daily easy comfortable physical contact—be it a hug sitting in his lap or right close to him, holding hands and having big and small adventures together. ☺

I also shared a pic on FB recently of Sam and his dad hugging tightly, and used her words to accompany it because I, too, feel the same. Karen James is the writer of those words. 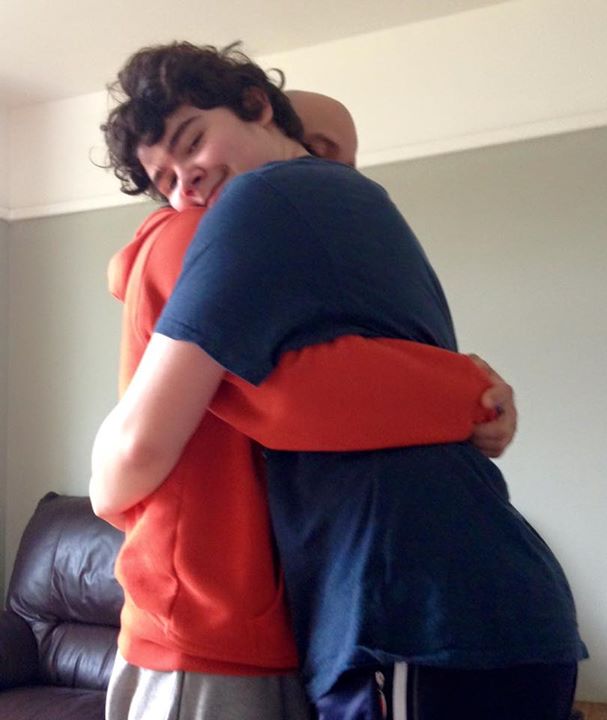 That moment between Kes and me also feels SO important, up there with the one above for sure. And I have realised that it all comes down to trust and partnering. He trusts me deeply now, he trusts that I have his back. He trusts that I will say Yes more often than no, and that I will make things happen for him to the best of my ability and resources at the time. He trusts that I trust his unique and individual learning process. Giving him choices, and treating him, and speaking to him most importantly as I would to Karl or a friend, has built immeasurable trust and respect. Giving them a choice in how they spend their childhood years has built a trust between us that cannot be measured. That trust has opened up deep love, joy, connection, and learning!

If your natural impulse is "No," replace it with, "Let me think about that." Then ask yourself who will will be hurt if you say yes. 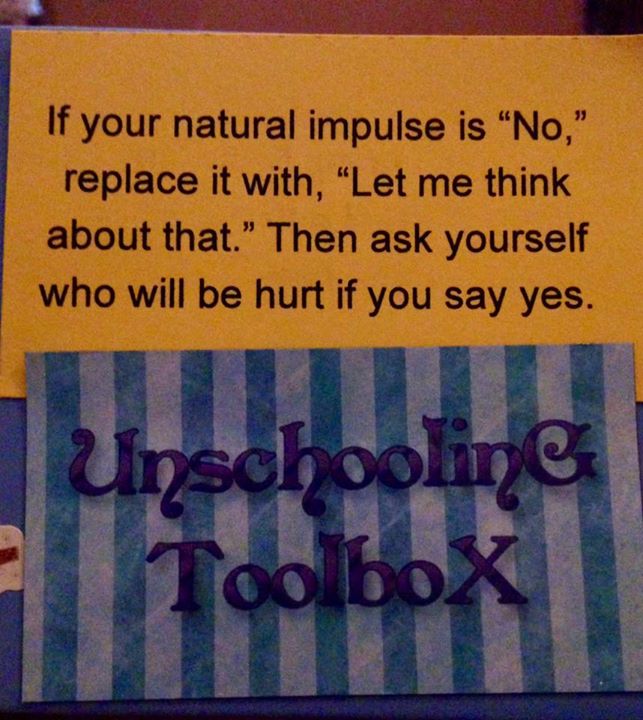 In my experience saying ‘yes’ or ‘let me think about that’ first before a knee jerk ‘No’ builds trust, and connects more deeply. Letting go of the control—which is so often unnecessary, and pretty much always is hurtful and builds resentment. Letting go of the fears that are so often scare-mongering, and also are so often based in nothing, with nothing whatsoever to back them up. Nothing. Fears that are so often without any real thinking on anyone’s part, and without willingness to open up to new ways of looking at things.

Getting stuck to, and in, my and other people’s, ‘experts,’ fears, visions and programming of how it would and will all be if not adhered to. Listening to and being guided by fears and predicted outcomes, and not looking and listening to, and trusting, the actual little person in front of me—that all adds up to such intense frustration and utter dismay for them! And it impedes natural learning like nothing else!

Be his partner, not his adversary. —Sandra Dodd

All that, and more has helped me move forward towards better relationships and real partnering with my boys, and led to Kes, without any hesitation, to say that his least favourite thing about me was my snoring—my snoring!!

AND to my eldest son saying almost daily, “You are my most favourite person in whole entire world,” or "I’m so happy you are my mum.”

That means the whole world and more to me, and has made these sometimes bumpy, but mostly joyful, and very VERY eye-opening and life-changing three years worth it a trillion times over.

I needed to write that. I try to write shorter posts, I really do…. but really they are for me to get it all out, and clarified.

If you made it to here well done! And thank you for reading. ☺