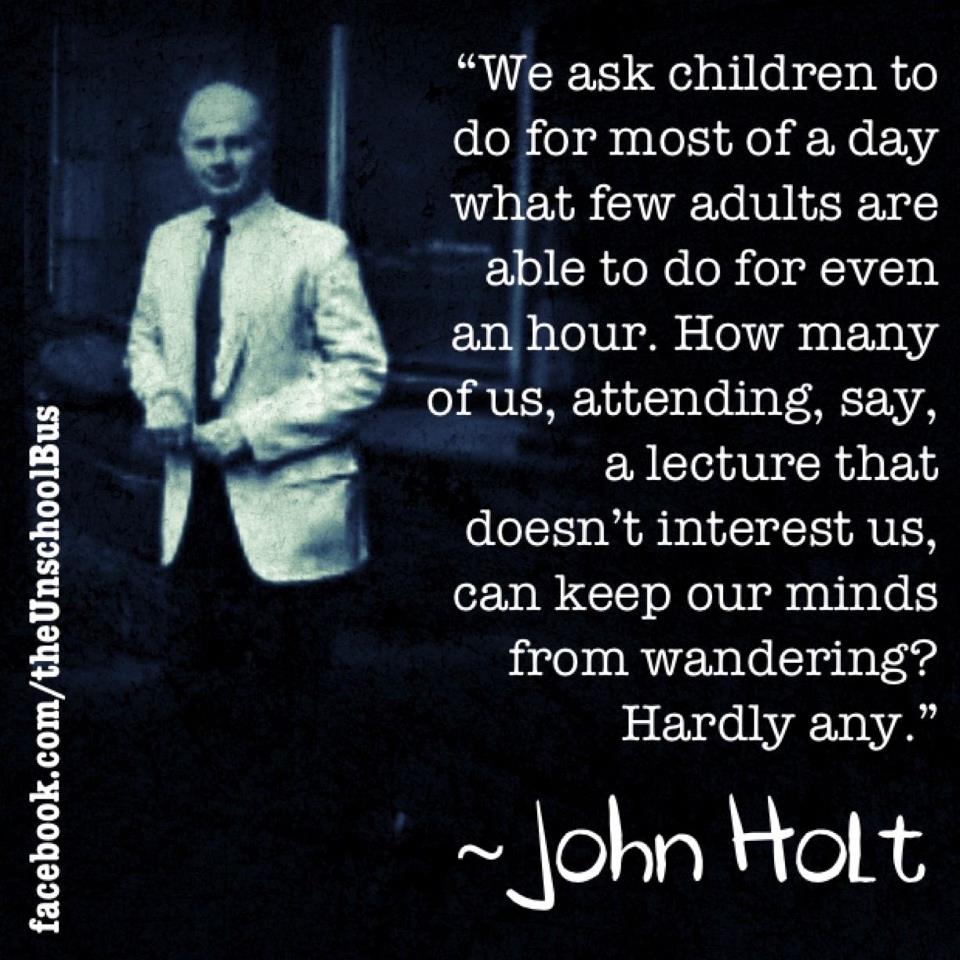 "We ask children to do for most of a day what few adults are able to do for even an hour. How many of us, attending, say, a lecture that doesn't interest us, can keep our minds from wandering? Hardly any." ~John Holt

Q. Will they have the opportunity to overcome or do things that they think they don't want to do?

A. I'm not sure what this question means. If it means, will unschooled children know what it is to have to do difficult and demanding things in order to reach goals they have set for themselves, I would say, yes, life is full of such requirements. But this is not at all the same thing as doing something, and in the case of school usually something stupid and boring, simply because someone else tells you you'll be punished if you don't. Whether children resist such demands or yield to them, it is bad for them. Struggling with inherent difficulties of a chosen or inescapable task builds character; merely submitting to superior force destroys it.

~John Holt~ Teach Your Own
"I have used the words "home schooling" to describe the process by which children grow and learn in the world without going, or going very much, to schools, because those words are familiar and quickly understood. But in one very important sense they are misleading. What is most important and valuable about the home as a base for children's growth in the world is not that it is a better school than the schools but that it isn't a school at all.

John Holt, Teach Your Own

"What makes people smart, curious, alert, observant, competent, confident, resourceful, persistent - in the broadest and best sense, intelligent- is not having access to more and more learning places, resources, and specialists, but being able in their lives to do a wide variety of interesting things that matter, things that challenge their ingenuity, skill, and judgement, and that make an obvious difference in their lives and the lives of people around them."

"Of course, a child may not know what he may need to know in ten years (who does?), but he knows, and much better than anyone else, what he wants and needs to know right now, what his mind is ready and hungry for. If we help him, or just allow him, to learn that, he will remember it, use it, build on it. If we try to make him learn something else, that we think is more important, the chances are that he won't learn it, or will learn very little of it, that he will soon forget most of what he learned, and what is worst of all, will before long lose most of his appetite for learning anything."

"We who believe that children want to learn about the world, are good at it, and can be trusted to do it with very little adult coercion or interference, are probably no more than one percent of the population, if that. And we are not likely to become the majority in my lifetime. This doesn't trouble me much anymore, as long as this minority keeps on growing. My work is to help it grow. "

"I can't help noting that no cultures in the word that I have ever heard of make such a fuss about children's bedtimes, and no cultures have so many adults who find it so hard either to go to sleep or wake up. Could these social facts be connected? I strongly suspect they are."

"About reading, children learn something much more difficult than reading without instruction - namely, to speak and understand their native language. I do not think they would or could learn it if they were instructed. I think reading instruction is the enemy of reading."

"Living is learning and when kids are living fully and energetically and happily they are learning a lot, even if we don't always know what it is."

"If we continually try to force a child to do what he is afraid to do, he will become more timid, and will use his brains and energy, not to explore the unknown, but to find ways to avoid the pressures we put on him."

"Children do not need to be made to learn to be better, told what to do or shown how. If they are given access to enough of the world, they will see clearly enough what things are truly important to themselves and to others, and they will make for themselves a better path into that world then anyone else could make for them."

"The child is curious. He wants to make sense out of things, find out how things work, gain competence and control over himself and his environment, and do what he can see other people doing. He is open, perceptive, and experimental. He does not merely observe the world around him, He does not shut himself off from the strange, complicated world around him, but tastes it, touches it, hefts it, bends it, breaks it. To find out how reality works, he works on it. He is bold. He is not afraid of making mistakes. And he is patient. He can tolerate an extraordinary amount of uncertainty, confusion, ignorance, and suspense ... School is not a place that gives much time, or opportunity, or reward, for this kind of thinking and learning."

"We teachers - perhaps all human beings - are in the grip of an astonishing delusion. We think that we can take a picture, a structure, a working model of something, constructed in our minds out of long experience and familiarity, and by turning that model into a string of words, transplant it whole into the mind of someone else. Perhaps once in a thousand times, when the explanation is extraordinary good, and the listener extraordinary experienced and skillful at turning word strings into non-verbal reality, and when the explainer and listener share in common many of the experiences being talked about, the process may work, and some real meaning may be communicated.

"Most of the time, explaining does not increase understanding, and may even lessen it."

"Leaders are not, as we are often led to think, people who go along with huge crowds following them. Leaders are people who go their own way without caring, or even looking to see, whether anyone is following them. "Leadership qualities" are not the qualities that enable people to attract followers, but those that enable them to do without them. They include, at the very least, courage, endurance, patience, humor, flexibility, resourcefulness, stubbornness, a keen sense of reality, and the ability to keep a cool and clear head, even when things are going badly. True leaders, in short, do not make people into followers, but into other leaders."

"What children need is not new and better curricula but access to more and more of the real world; plenty of time and space to think over their experiences, and to use fantasy and play to make meaning out of them; and advice, road maps, guidebooks, to make it easier for them to get where they want to go (not where we think they ought to go), and to find out what they want to find out."

Deb Lewis comments:
And the continuation of that quote which I think suggests Holt foresaw an evolution of his ideas...

"The modern world is dangerous, confusing, not meant for children, not generally kind or welcoming to them. We have much to learn about how to make the world more accessible to them, and how to give them more freedom and competence in exploring it. But this as a very different thing from designing nice little curricula."

“There must be a way to educate young children so that the great human qualities that we know are in them may be developed. But we’ll never do it as long as we are obsessed with tests. At faculty meetings we talk about how to reward the thinkers in our classes. Who is kidding whom? No amount of rewards and satisfactions obtained in the small group thinking sessions will make up to Monica for what she felt today, faced by a final test that she knew she couldn't do and was going to fail.

"Pleasant experiences don’t make up for painful ones. No child, once painfully burned, would agree to be burned again, however enticing the reward. For all our talk and good intentions, there is much more stick than carrot in school, and while this remains so, children are going to adopt a strategy aimed above all else at staying out of trouble. How can we foster a joyous, alert, wholehearted participation in life if we build all our schooling around the holiness of getting 'right answers'?”

“We ask children to do for most of a day what few adults are able to do for even an hour. How many of us, attending, say, a lecture that doesn’t interest us, can keep our minds from wandering? Hardly any.”

“A child only pours herself into a little funnel or into a little box when she’s afraid of the world—when she’s been defeated. But when a child is doing something she’s passionately interested in, she grows like a tree—in all directions. This is how children learn, how children grow. They send down a taproot like a tree in dry soil. The tree may be stunted, but it sends out these roots, and suddenly one of these little taproots goes down and strikes a source of water. And the whole tree grows."


John Holt, Learning All the Time
Thanks, Heather/crazyzeus, for collecting and sending some of these quotes.