Scientific studies show that humans habituate to food — such that, for example, the 10th bite of of chocolate is less desirable than the first bite. In scientific terms, habituation is the "decreased physiological and behavioral response due to extended or repeated exposure to a stimulus." So, essentially, the more you eat something, the less you want to eat it.

The researchers concluded that the resulting decrease in eating that food is because the participant desired to eat it less, not because they considered it less palatable, or that they felt full.

This study also shows that habituation to a food is food type specific (for example, M & M's only, not cheese).

This study, and others also show that habituation works equally for sweet and savoury foods — so you get habituated to M & M's just the same as cheese. Another study compared habituation rates between apricots and chocolate cake and found consumption of both declined to the same low level over the same time period.

And in case you were wondering, while most studies use adults as subjects, the same habituation response has been found in children repeatedly presented with apple pie and hamburgers (Epstein et al. 2003).

In unschooling terms, the science is clear — the more M & M's your child eats, they less they will want M & M's. Which explains nicely why halloween candies are often left uneaten by radically unschooled kids, while they go looking for a grilled cheese sandwich or some fruit.

For a similar analysis from another science, see Economics of Restricting TV Watching of Children, by Pam Sorooshian (in which her examples are about food). Jo Isaac, 2016:

A summary of some recent-ish research on the effects of parental food control on children's eating habits:

In an extensive review paper in 2004, Benton assesses the role of parents in the determination of the food preferences in their children. He explores the evolutionary basis behind children's food choices—for example, babies and toddlers have an innate preference for sweet and salty flavours and avoid bitter and sour tastes. This is explained as reflecting an evolutionary background where sweetness predicts a source of energy, whereas bitterness predicts toxicity/poison.

He also discusses the evolutionary mechanisms that might explain why children avoid new foods (termed neophobia), particularly in toddlers. Iin our evolutionary past, avoiding new foods had survival value if it discouraged eating items that might have been poisonous, particularly at the stage when a child was beginning to walk. Benton stresses that "Parents need to understand that neophobia is normal."

He then goes on to examine parental manipulation of food, and finds:

More recent studies back up these findings. In a review of 81 studies, Berge (2009) found that maternal pressure and restriction in feeding their children was associated with an increase in childhood weight gain, and a decrease in healthy dietary intake. She also found that children with mothers who used restriction in feeding and/or pressured their child to eat had greater increase in BMI (ie: significant weight gain), and that overweight girls at the age of 5 who received higher levels of maternal food restriction had the highest eating in the absence of hunger at age 9. This suggests inability to recognise a feeling of fullness/satiation.

Berge summarises that the research indicates that authoritative parenting style is positively associated with child and adolescent obesity.

In a more recent paper, Janzen et al. (2012) also found that the research shows that restrictive parenting could stimulate poor intake regulation and overeating at times when access to food is not restricted, resulting in weight gain. While Rodgers et al. (2013) state that restriction, emotional feeding, encouragement to eat, weight-based restriction and fat restriction were associated prospectively with the development poor eating behaviors in children including emotional eating and tendency to overeat.

Benton (2004) Role of parents in the determination of food preferences of children and the development of obesity.
https://www.readcube.com/articles/10.1038%2Fsj.ijo.0802532

Berge (2010) A Review of Familial Correlates of Child and Adolescent Obesity: What has the 21st Century Taught us so Far?
http://www.ncbi.nlm.nih.gov/pmc/articles/PMC2890027/

Jo Isaac, an unschooling mom with a PhD in Biology, wrote in April 2015:

I think, from an evolutionary perspective, it makes sense that kids are generally likely to choose from a limited pool of foods that they are familiar with, and often those don't include leafy green plants — for good reason....

Thyme to touch: Infants possess strategies that protect them from dangers posed by plants

There is also some research that suggests that some veggies have chemicals that inhibit rapid cell division. That's OK for adults and maybe one way vegetables can protect adults from cancer, but not OK for fast growing children...

As a child I ate only a few foods, and slowly as I got older (not until my 20's) I expanded the range of foods I ate - in my own way, in my own time

Find what your kids like, and buy more of it.

Note from Sandra: in case that link goes bad someday, here's enough to search for it elsewhere:

Adaptiveness of food learning and food aversions in children by Elizabeth Cashdan, a paper on The Anthropology of Food

David Waynforth found this article, and Schuyler Waynforth sent it to me with this note:

It's about how children's reticence to eat certain kinds of things might be adaptive given the foods that would have been around in hunter gatherer's larders. In the conclusion section she says:

Parents are often advised—with good reason—to relax about their child's eating behavior and not worry so much. Yet this is often difficult for them to do. If it can be shown that these behaviors are sensible adaptations to learning about food, parents should be better able to accept their child's food habits with equanimity.

You might need to print the article out to read it, but it's easy reading and not long. One thing the research mentions is the kind of eating kids do when they might want one food for many days running, and also the very common (and sensible, for beginners) preference for eating food that's not mixed with other foods. Note, 2015—the original link was gone, but here is the summary:

This paper uses an evolutionary perspective to explain features of food learning in human children. Data from Western parents indicate that (1) children are least picky about foods when they are between one and two years of age, (2) vegetables are frequently refused by children, and (3) children have a tendency to eat foods one at a time rather than mixed together. Adaptive explanations for these patterns are suggested, together with supporting evidence from studies of the ontogeny of human and non-human primate diet choice. The following arguments are made: (1) age difference in receptiveness to new foods is consistent with the existence of a sensitive period for learning about food; (2) since leaves and other non-fruit plant parts often contain toxic secondary compounds and young animals are less able to detoxify these chemicals than are adults, an initial dislike of vegetables may function to protect young children against the risk of poisoning; (3) a preference for easily identifiable foods eaten separately may be an evolved preference that aids in identification of the food and the consequences of eating it.

Clicking the title just above the abstract will take you to a page that says [PDF] from researchgate.net. Clicking THAT (on the righthand side) will open a PDF you can read (or it did on my MacBook, anyway), and it downloads it (which you don't need to save, if reading it on the screen is plenty). It's about a dozen pages plus citations. There is. . . a really good book written by a couple of MDs—Let them Eat Cake: the Case Against Controlling What Your Children Eat. I've seen it, and bought it several times to give away. There are lots of copies available used and very cheap—just barely more than the shipping cost.

Here is a summary of the book:

Let them Eat Cake: the Case Against Controlling What Your Children Eat. 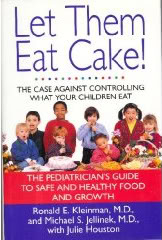 Pediatrician Klenman and child psychiatrist Jellinek believe that too many well-meaning parents take food and rules far too seriously for a child's own good.

While the food choices children make are sometimes dreadful, parents should not act as food police. Instead, all would do well to place food choices in proper perspective: children are not middle-aged people, their nutritional needs are different from adults', food is (usually) not a life-and-death issue for them, and one or two not so nutritious meals will not hurt them. Therefore, suggest the authors, kids shouldn't worry about cholesterol or feel guilty because they enjoy a candy bar.

Although some parents may believe otherwise, these doctors declare studies have shown that banning sweets is counterproductive. Children, they say, should be offered choices and encouraged to try new foods. This is a sensible, well-written and unhysterical approach to what some may consider a parental nightmare: children who have minds of their own when it comes to food.

In addition to questions most often asked by parents, the authors also provide in-depth discussion of food safety, food allergies and eating disorders.

Inﬂuence of parental attitudes in the development of children eating behaviour

They're not unschoolers, but they're not proposing total parental control, either. They do say that limits create desire and pressure creates aversion. There are things unschoolers can use, and some thing that might seem more controlling than necessary.

More about food and eating