Unschooled Kids and Money
by Sandra Dodd
writing with children aged 20, 17 and 14

also there's a sound file, near the bottom of the page, from Amy Child's series in 2014.

I think (almost) *everyone* would like kind, respectful, generous, polite children. I just think they haven't found the recipe yet.
We have! <G>

Yes!!
But when I try to tell them, their next thought is that Marty must be just an exceptional human to whom the regular "truths" don't apply.

So few people have seen a person who's not so scarred by social business-as-usual life that they can't imagine it. We've seen it but others don't believe us. [My response ended up veering toward money, so I'm going to put it where I can find it the next time this comes up.]

They wouldn't approve of our methods: hugging through tantrums;
being generous with our money, time, and possessions...

I would guess that people where Marty works would assume that he's working because we want him to, because that's how he's learning about money, that that's the only way he will grow up and get out of the house, and those kinds of things. But Marty has always been great with saving money. He has a Lego bank—a cowboy/western-town bank about a foot cubed, with double walls so really hard to take apart, with little Lego guards on top, and a chute for putting the money in. He's only ever opened it once, and had $300 or so. He hadn't opened it for over a year or maybe over two years, and had put pocket change and gifts and money he found. It's filling up again in there.

AND... from the time Marty turned 17, he stopped collecting his allowance, which is $12.75 a week. He writes it on the calendar in the kitchen. (He said it's so when he's 18 and not getting an allowance anymore he can collect from that fund.) 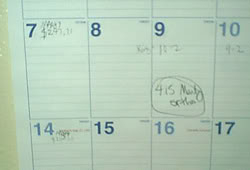 I just went and looked and it says $403.50. I looked back up through those notes written on the Sundays, and it seems sometimes there have been adjustments for small amounts of money we owed him or he owed us. He's always been the most meticulous kid about money, and because we were generous with them, they've been entirely honest with us.

I would never have minded if they got a candy bar or soda if they went on an errand with grocery money, but unless I SAID "and get yourself something if you want," they wouldn't.

Last winter several weeks went by when we had houseguests and confusion, and Holly realized she hadn't gotten her allowance for a few weeks, maybe as much as a month. Keith was willing to just give her enough for all those weeks back to when we all remembered for sure she had gotten some, but she said no, she was afraid it would be too much, and just to start from that week.

When Kirby (who is now 20) was younger, maybe six, we started our allowance plan. Allowance day is Sunday, and the formula is 75 cents per year of age per week. So at six, that's $4.50. I wanted to go with full dollars per year, but we added it up to see what it might be in the midst of it, with three kids in two digits, and thought we couldn't afford it.

As each turned five, he or she started getting this allowance. We said, so long ago, "Until you're 18." It didn't feel so good stopping when Kirby was 18, but by then he had had a job for years. The allowance was his savings. He wouldn't claim it until he needed a lump sum, like to take with him to a gaming tournament or anime convention.

That money was theirs to spend without advice or question.

Because unschooling turned out the way it did, though, most purchases seemed justified "in educational terms." If they wanted something they saw in a museum gift shop, it was either clothes (usually clothes AND education in such cases, like the t-shirt Marty has covered with daVinci notebook parts), or a game (math, logic, topic-of-game) or a kit or a toy that had something to do with optics or magnetism or balance or flight. Those were school supplies. They didn't have to spend their money on those.

If they wanted something that would improve their quality of life, especially if it could be shared with others in the family, it was easy to justify helping them out on that with matching funds or an advance on allowance. We might just buy it for them outright, or for a birthday or Christmas.

Once when a new video game was to come out in three weeks or so, I overheard Marty and Kirby discussing at length and without any frustration all the different combinations of ownership and funding might be possible for them to put their allowance together and buy it. If Kirby contributed as much as Marty's allowance, they could be co-owners, but wouldn't have enough to get it the day it was released. Could Marty owe Kirby, and buy in up to 50% later? Should Marty just own a lesser percentage? I think they were 9 and 12 or so. It was complicated math, with all those percentages of increments of age times .75, but they were doing it, and just in their heads, and happily, with a purpose.

They didn't think to ask us for help. They didn't feel they needed to. 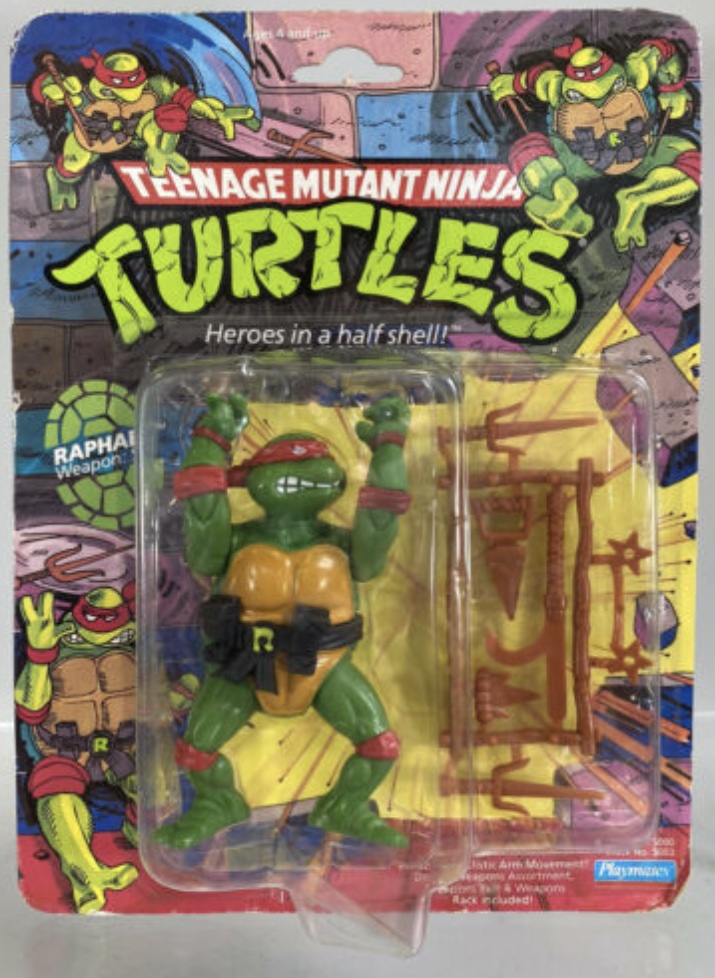 When Kirby was little and the younger kids were very young, a few times I paid him with Ninja Turtle action figures to read to Marty or to play with him at Marty's pace and preference while I did something with Holly, and once to play with Holly while Marty and I did something together. I was still at the house; it wasn't full-on babysitting. After the helping time was done, I'd take him to the store and let him get a Ninja Turtle.

When Kirby was 14 he was offered a job in a gaming shop. He made a little over minimum wage, and got a few small raises. He worked there four years, going from just a few hours Saturday morning and some clean-up to full responsibility for the store when he was 16 and they gave him keys and security codes. He now works at Dion's, a pizza restaurant, and really likes it. He works between 20 and 30 hours a week.

Marty worked for a while for a bootmaker, helping make leather boots, shoes and pouches. When he was nearly 17 he applied for part-time work at a grocery store just a quick walk out our back gate. They offered him a full time job and he accepted. That was a sudden life change for him, and he had to cut his hair, but he gets off work at 3:00 p.m., doesn't work weekends, and is putting money away for the unknown future.

Recently I paid Holly $5 to do a title for a webpage. She's thinking of doing some more of those. Other than that, there's been lots of me and Keith offering money and them saying "That's okay, I still have my allowance," or of them accepting it graciously. I'm thinking of things like "We're going ice skating," or "Can I go to the movie with Marty and them if he'll let me?"

"Do you need money?"

They usually say they don't. Sometimes I send a ten or twenty dollar bill with Holly to hold in reserve just in case they end up short, or wanting snacks, or going to eat later. As often as not, she brings it back. 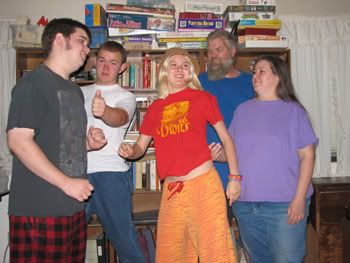 Sometimes if someone is keeping track of allowance on the calendar instead of taking the cash each week it will go into negative numbers because we've ordered something with a charge card and "debitted" that savings account, as it were.

Marty and Kirby pay for the DSL line, half and half. I thought they were paying thirds, but heard recently that they've split the cost. I didn't know that; it was a deal they made with Keith, their dad. Holly and I are riding free on that then (relatively speaking). They got it to play Halo II and World of Warcraft. Before that we were on a second phone line, on dial-up.

They're gradually moving toward independence without our having made rules and traps and hardships for them. Kirby and Marty pay for their entertainment and food, and for friends' food, and both have savings at the credit union. Keith is their backup banker, checking through their statements for anything they might have missed or anything questionable. They have debit cards through the credit union, but generally they get cash with those when they need it and leave the money in there otherwise. Marty's check is on direct deposit now.


The writing and photo just above first appeared in a collection called A Day in Our Lives: Unschooling Voices #3.

Sandra Dodd – on scrawny vs fat healthy unschooling and how to save on therapy costs.

Rose Sorooshian – on whether buying things for children spoils them.

Renee and XuMei Cabatic – on the details of their family’s finances.

Gillian Goddard – on running a business while unschooling.

Ben Hewitt – on privilege and sacrifice.


This recording is also embedded at How Much does Unschooling Cost?

"I don't believe money makes kids spoiled, and I don't think they will be spoiled by getting their way about things.

Partners
Too many families control their children in too many ways. This page isn't directly about money, but directly applies to money or any other considerations of a parent and child partnership.