My letter from David Bowie

Sandra Dodd (Sandra Adams, back then)

Someone on the AlwaysLearning list wrote in 2001 or so:

I had a major crush on David Bowie (still do as a matter of fact!).

I was his first American fan.

I wrote him a fan letter, it came back with advice about a better place to send it; I figured out how to mail something internationally, and it arrived.

I knew that, because he sent me a long, full-page typed letter, signed it cute, sent me photostatic copies (pre-Xerox) of his publicity shots, and a full front section of a newspaper he was on/in (Chelsea news? I have it all somewhere, but not all in one place.)

I saved the big envelope, but gave the stamps to a friend.

The orginal letter is in some safe place (darn me, when we moved...) but I definitely have it.

There's a copy on the wall here in my office.

"Dear Sandra, When I called in this, my manager's office, a few moments ago I was handed my very first American fan letter - and it was from you. I was so pleased that I had to sit down and type an immediate reply..." 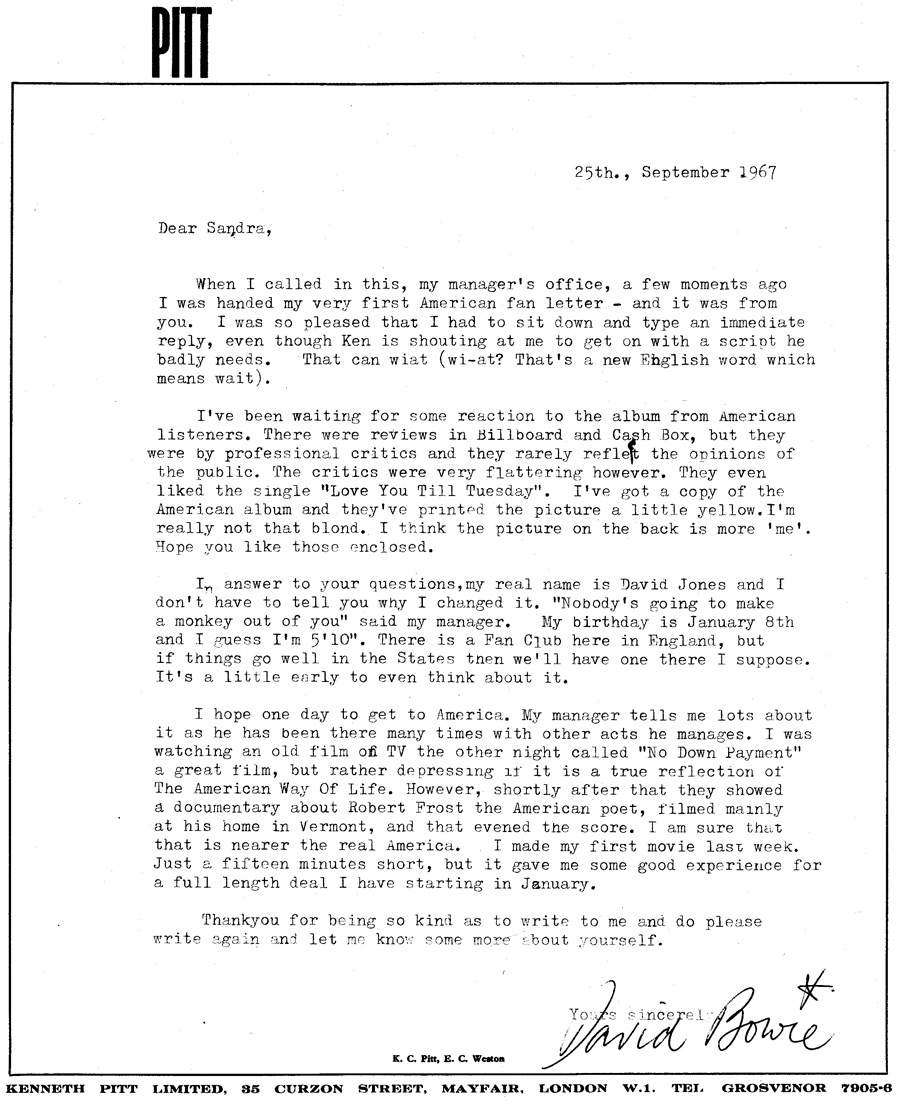 My uncle was the manager of a C&W station in Amarillo, and they would get promotional albums. I had a cousin my age, had an old light-up juke box in her bedroom, had music of all sorts, and he would let her go through the non-C&W stuff and keep what she wanted. She didn't keep this one (the promo of his first album) and it came to me (when another cousin didn't want it either; it eventually came to me).

It was weird, and interesting, and I wrote him a letter. I had told him I liked his writing, and the songs were good. I think I'd told him they were as good as the Beatles, maybe, or some such. I wish I had kept a copy of what I wrote.

When he came to Santa Fe to film The Man Who Fell to Earth a couple of years later, my friends were saying "GO MEET HIM!" I didn't. I was embarrassed or afraid he wouldn't remember me or something, and I didn't care as much then as I had before.

The letter was sweet. I had offered to start a fan club. He said

"There is a Fan Club here in England, but if things go well in the States then we'll have one there I suppose. It's a little early to even think about it.

"I hope one day to get to America. my manager tells me lots about it as he has been there many times with other acts he manages. I was watching an old film on TV the other night called "No Down Payment" a great film, but rather depressing if it is a true reflection of The American Way of Life. However, shortly after that they showed a documentary about Robert Frost the American poet, filmed mainly at his home in Vermont, and that evened the score. I am sure that that is nearer the real America..."

He asked me to write and tell him more about myself. I did. I always figured I was a reject for being fourteen years old. But probably he was swept away in being busy getting famous. And I was getting swept away in my interest in folk music, and my whirlwind of high school stuff, playing guitar, going to all-State, going to college early, and it was okay.

I had thumb-tacked the newspaper to the ceiling of my room (acoustical tile) and it was there for two years.

The best thing about the newspaper was I got my first taste of everyday British English, neither literary nor television or movie script. Advertisements and the everyday descriptions of things. A truck's engine had caught fire. But I had to figure that out, from a short article that said a lorry had had a fire under its bonnet. I was thrilled.

The letter's on PITT stationery (the manager's stationery, Kenneth Pitt) and there are very few typos. Good typist. That impressed me too!

I didn't buy any more of his albums, anyway—by the time he was openly available I was immersed in folk music. I bought some current acoustic stuff (Elton John, Joni Mitchell, Carol King), but mostly I was collecting field recordings of traditional ballads and everyday songs. Then I got involved in Renaissance music, and I had a sexy, funny boyfriend from India and... one thing lead to another and here I am now hanging out with you guys!

Sandra
December 23, 2001, [email protected] (though I clarified a couple of things above, over the years)

I was responding to Meghan Anderson.

LATER NOTE: In 2009, the letter was more widely discovered and launched out and about after its appearance in a blog called Letters of note. Stories of that are here: David Bowie Letter. This site got 90,000 hits in one day, one of those early days, when wire services started picking up the story. There are links to a couple of those articles. My photo was in The Sun. I was interviewed by an Australian radio show.
Click the letter for a larger look. I should scan the photostatic copies (dark and curled up, but some might reproduce okay) and some of the newspaper too sometime. When I have I'll link themhere.

There's a photo here of the house I lived in when I got that letter, and what I looked like in those days: sandradodd.com/60s