Image above by Karen James, Ethan and Nick, in October 2012
Text below by Connie Coyle, in April 2012

This post is brought to you by the word queef.

Now that I have your attention, I will let you know that this post will actually be dedicated to parsing out all of the learning that happens while my daughters are playing Minecraft. We have become a rather avid crafting family as all of us now have Minecraft (with the exception of our three year old) and we have our own server too. What I am going to do in this post is spell out a lot of the things that we are learning from Minecraft. There is a back story to why this post exists so I will start by sharing that first. I will clearly label the back story and the learning parts so you can skip the back story. The back story will help to explain my first sentence.

The back story behind all this is that my daughter's best friend is also an avid Minecraft player. They play on Minecraft and Skype almost daily. When nobody else is on with them, they can get pretty silly and they will experiment with foul language. Rather than being upset by this, I ran with it. I have built a rather large house on our server so I decided to put up obnoxious signs for the girls to read and discover. It is silly stuff like "Don't scratch your butt in public." I have also invited them to add to the signs. I am not worried about the content of the signs because I know it is them experimenting with language. During the course of our silly sign making, they are practicing keyboard skills, spelling, reading, and who knows what else.

Anyway, the other night,we had a silly sign making session. I am not even sure how to explain the content of the signs other than to say that they were discussing bodily functions such as the different types of farts. Since the conversation was occurring between all girls, that led to a discussion of vagina farts. My daughter's BFF called them quipples to which my daughter responded, "No, it's actually called a queef." That led to signs with the word queef in them. The conversation and the related signs ended up being completely hilarious yet completely inappropriate. The girls knew that the words were inappropriate and that made it even funnier. My friend and I were listening/watching the entire time and could not stop laughing. This was a conversation that you would not think would occur between two young girls. Most of the time, potty humor is usually associated with boys. 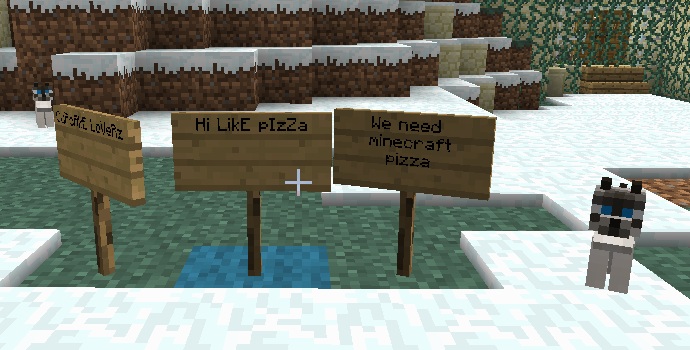 When my friend and I were discussing the girls and the signs, she made the comment that she wished that she could share some of what they were doing on the state reports. (They live in Pennsylvania, which has some pretty strict homeschooling regulations.) She and I agreed that the content was not appropriate to share with anybody, especially a reporting agency. Really, the actual content of the signs will not be shared with anybody other than those that get whitelisted on our server. At the time of this writing, the signs are still there. I suspect that the girls will decide to remove them at some point because they are pretty sensitive to the feelings of others and would not want to scandalize or offend others.

After thinking about it, I realized that it is totally possible to share what they are learning in a homeschool portfolio. I couldn't take screen shots of those signs but I could take screen shots of other words that have been written on various signs by me and the girls.

Of course, that led me to a huge brainstorm of all of the activities and things that the girls are learning as a result of Minecraft. What follows is a list of my brainstorming that would have never happened if we the word queef hadn't come up during some silliness.

(Note: The following list is NOT comprehensive and is more of a list that resulted from brainstorming and getting ideas from my friend. In some places, I will explain and, in others, I won't. If you see something that I missed, please leave a comment. I think it would be helpful to parents and educators to see how much can be learned from playing Minecraft.)

The difference in rules on the different servers. The difference between consensus (where everyone has to agree) and majority (most of the people have to agree). Dictatorship where laws and rules are made by somebody else and you have no say in them at all. Different rules for different structures. Creative versus survival, can be compared to places where everybody has what they need versus places where you have to fight to survive. (Pure Socialism vs. Capitalism (a bit of a stretch but the concepts are there)). Appealing to authorities when you disagree with a decision or have problems within a particular Minecraft community/server.

How to be a good citizen in a virtual world. Includes following rules, respecting other peopleâ€™s properties. Rules and why they are or are not necessary. Rules on servers are equivalent to laws. Consequences for breaking rules/laws when playing on other servers.

How to communicate effectively with others through both written and spoken word, which includes consideration of purpose and audience. When the kids are working together on a project with others, their communication style is very different from when it is just the two of them. When working with others to achieve a common goal, the written and spoken word tend to be more goal oriented and relies heavily on the vocabulary of Minecraft. When goofing around with no common goal, word choice and communication style are more informal. Communication style, including word choice, changes based on who is on the call with them.

Interoperability and different types of computers. PC vs. Mac. Finding games to work on both in order to facilitate working with somebody with different abilities/capabilities. Our friends have Mac and we have PC. It requires us, and the girls, to look for games and programs that will work on both platforms in order for them to collaborate more effectively. This comes into play when looking for programs to edit Minecraft skins. Awareness of the use of IP addresses for locating servers. Awareness of networking and what a server is. File naming conventions (when saving Minecraft skins). The difference between uploading and downloading. Functionality of different software packages, ie Skype.

Finding other people to play with that share common goals and ideas.

Working together to achieve common goals. Includes sharing resources and sharing the work load in building and creating facilities within Minecraft. Sharing of ideas. Helping each other with spelling, reading, and vocabulary.

The difference between a colon and a period and where to find them on the keyboard. The use of the backslash in order to issue commands within game play.

Typing in different codes, IP addresses, creating signs, and using the keyboard to communicate. Where different special characters are located on the keyboard.

In different contexts, numbers mean different things. The use of numbers in an IP address. The use of numbers to represent concrete things. For example, you can give yourself items on Minecraft by typing in a numeric code. Concept of more than and less than. Players discuss who has more items in order to figure out how many items are needed to build. Addition and subtraction: How many more items are needed? If I give you 3, then that will leave me with one. Division: If one player has 3 items, how can those items be divided up so that everyone has the same amount? All the base 4 math, multiples of 8

On some servers, you can mine items and take them to the local shop to sell so that you can buy the items that you need to build.

Helping each other problem solve. Sharing ideas and information. Helping a friend by spelling words for them, giving them codes, or other items.

Meeting people from across the US. So far the learning network consists of people from Maine, Texas, PA, Minnesota. (Perhaps others.) Includes map skills due to the in game map. Using a compass to identify north, south, east, and west. Using land marks to find your way.

Pennsylvania is one hour ahead of Texas. To find out what time it is in PA, we have to add an hour. Recently, our friends went to Arizona so we had to coordinate play time between Arizona and Texas. Arizona is one or two hours behind Texas depending on the time of year. To figure out what time it was in Arizona, we subtracted two hours from time in Texas. Another cool thing that we did was look at the daylight map to see if it is/was light or dark where our friends are. Here is a really cool daylight map so you can see where in the world it is light or dark at any given time: http://www.daylightmap.com/index.php
[2022 note from Sandra:
That link disappeared, and redirects to a site advertising an android app called Terratime, that costs ($6.99 U.S. in June 2022). I'm guessing it was created by those who had the other page before.]

Geology and lots and lots of mineralogy including discussing all of the different types of ore. What is a biome?, gardening, types of plants and animals. Creating habitats. different types of building materials. Types of weather since it rains and snows on Minecraft. Concept of sun rise-sun set, seasons, weather (and geological results of weather and lava), moon phases, Circuitry: using redstone to create circuits, pulleys and levers and pistons

Saying please and thank you. Telling people goodbye before logging off. Being mindful of those around you. Watching your language. Being sensitive to others and their differences. The importance of introductions when a new person gets on the call. Letting others know when you are going to be away from the computer. Speaking clearly and not trying to talk with things in your mouth. (If on Skype while crafting.)

Creating minecraft skins, building/designing houses, creating sculptures using principles of design, concept of dying white wool to make other colors in order to create sculptures. Music appreciation. (I forgot about this one but music was something my friend added to the list and then I remembered that there are music players on Minecraft that let you put records in.) Musical composition because there are music blocks that you can hit and produce musical notes.

Playing with various people from across all age groups and all cultural backgrounds.

How to deal with frustration and other emotions that may arise while playing with others.

The many benefits of Videogames 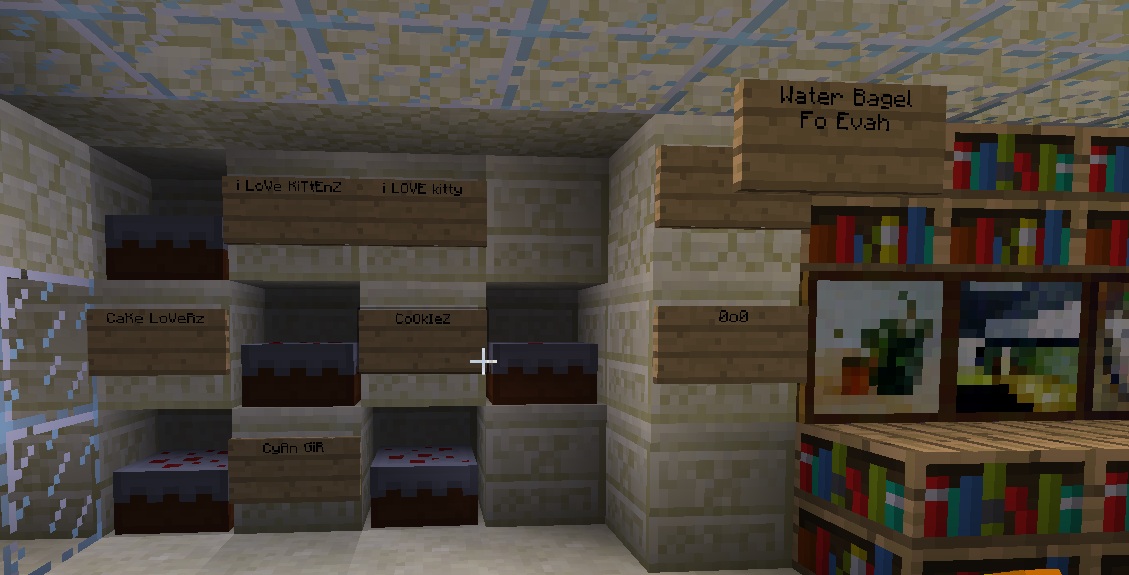