The problem of "Unschool World"

Is there anything written about living in "unschooler world"? I know that Sandra Dodd has said something about it in various times and places, but I can't for the life of me find anything written. I had one of those light bulb moments and would like to read and hear more about it.

It hasn't been specifically written up. Holly has objected to people who want to find all of their friends, support, ideas, jobs, mates, from among other unschoolers. (Well that's not a Holly quote; I'm expanding on the energy of her objection.)

If unschooling is living in the world, then creating a sub-world defeats the purpose. I don't object to conferences, but I think people should go to a conference or two a year, maybe visit some unschooling friends, and also do other things, and have other friends. Mostly they should live in the town or city where they live, and not in an overlaid fantasy world.

It's not just an unschooling situation; we've seen it with medievalists, who use their adopted "medieval name" all the time, and their everyday clothes are toned-own versions of their costumes, and their house is decorated per their hobby.

I think it happens with other costumed activities or hobbies as well, and it's a version of putting all of one's eggs in one basket. If the connection with that organization or hobby or activity wanes or fails, then they have no life left.

I think unschooling should be an aspect of a family's life, but not the ONLY aspect.

I guess if I save this and put it on a page, and if Colleen collects me some links (if you don't mind, Colleen... send links to posts or the topic, please?) I can add other bits and there will be a place to refer people to in the future. I wouldn't mind if it became one of those pages that just sat there getting pixel-dust on it, and nobody ever needs it!! 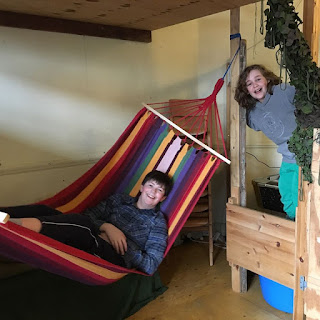 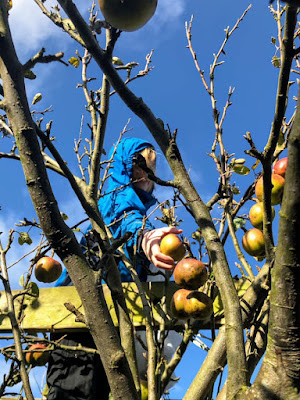 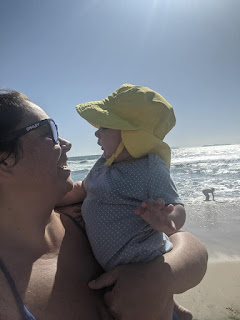 The here and now

About an uncomfortable stays with friends or relatives...

...you're still only giving yourself two choices-- stay where you're uncomfortable, or get a hotel room.

Part of being your child's partner is helping her learn how to be in the world, how to live comfortably and fully and considerately and legally. 😉

Twisting and turning to get away from the world can work sometimes (like my kids never went to school, for instance) but you can't twist yourself right off the planet or out of the present year. Help her adapt to situations when you can. If you can't, *then* run away and get a hotel room. But getting a room and not trying to help her cope and blend isn't the best option.

Sandra, at Always Learning, October 2008
Unschoolers live in the same world as other people. If you plan ahead, you can live in that world even better than most people do. If you stubbornly cling to frustration or fantasy, you can find yourselves isolated, and angry about it as though the isolation was imposed on you from the outside.

But as for ideas for what to say, there are lots collected here: Responding to questions about unschooling

Sandra, from a longer discussion in 2014 on Radical Unschooing Info
Some other references and pointers concerning what can be problematical about too insular a life: In a chat September 11, 2013, Hallie Kasiri wrote:

Mitch and I had a little joint epiphany recently regarding your post, Sandra, about the problem with an "unschooling community." I like to ramble aloud to him about ideas and discussions I've read and connections I'm making; one night he and I were talking through my confusion about that notion, and started looking back on various "communities" we've had frustrations with. For instance, the Oklahoma Atheists group which we had been highly involved in for maybe two years, and which Mitch became extremely disenchanted with; he had said more than once that the experience made him not want to be an atheist. So what we connected this night, is that thinking of oneself or one's family as identifying as a part of a given community of "like-minded" people, can create a dangerous sort of psychological trap wherein we wind up trying to conform or compromise our own values and ideals in order to maintain that sense of belonging to that community.
. . . .
"unschooling happens in my own home" ←-- yes, that's what we figured out. The only community that we want to be really dedicated to, is just our family, our home.

The post to which Hallie was referring is below:
Sandra Dodd 2:06am Jul 23 "The unschooling community" problem, as I see it (expounded, below)

Some people don't have a problem with the idea of "the unschooling community," and they want to explain to me what it is. I know what it is.

Some people are conference junkies and go to conferences lots, and don't do much else. That's okay. They live in the jet set (or the RV circuit) of the unschooling community. Not many can afford to do that. :-)

It seems to me that when people leave school they hope they're going to a different, new school. A FREE school. A school made of unschooling parents and their children. Some people, when they find out that there's not a group locally, think they can't unschool.

Even people with a local park day or playgroup need to unschool full time, though, and not just a few hours a week, so they need to figure it out.

But some people want there to be something, some structure, some group they can join, and having just joined (signed up), they are IN it.

Churches work that way. You can join a church. Sometimes you might need to request to be baptized, to join. Sometimes you might need to take a short series of classes, to be admitted, but when you're in, you are IN. For life and eternity, maybe. And you have "a church family," and you can be on committees, and they will hope you give them "a tithe" (one tenth of your income). And there will be church suppers, and maybe a softball team. It's okay if you don't know the words to the hymns or can't carry a tune. It's okay if you don't really read the Bible yourself, as long as you sit attentively during the services.

If you're in a church, someone will visit you in the hospital if you're sick. People will pray for you if you're unemployed. They might even help you find a job.

If you're in a church, there will be people you can tell your troubles to, and they will soothe you and advise you.

Some people want "the unschooling community" to be their new church.

Living in the real world shouldn't be in a smaller, limited world.

*** I've always felt a bit bad I didn't join in the unschooling community more by attending conferences or connecting online. ***

Because community has many different meanings it's hard to discuss clearly. (Which is why being clear about what's being discussed when "unschooling" is used here is important!)

A convention is a gathering. *Some* people keep returning to the same convention to meet up with the same people. Even that I don't think of as a community. It's friends getting together. Lists are interest groups where people can touch base on a common interest, share jokes that no one else will get ;-), even find people you click with. But it's a gathering place, not a community.

What's uncomfortable about saying "unschooling community" is that it has a club-like feel. It suggests that a person is automatically part of the club by being an unschooling parent. It suggests someone's "club membership" can be revoked if enough people decide that person isn't unschooling. It suggests the club is either democratic where each person has a right to express their opinion or that there will be club leaders who decide what one must do or believe to be in the club.

If, on the other hand, unschooling is what happens in your family, then there's no sense of feeling on the outside. There's no authority who will say you're unschooling or not. There *are* though your kids and spouse who are the determiners of what's *working* or not. Are they happy? Are the children learning? That's whose opinion counts.

If the owners of unschooling discussion lists reject the label "community" they can be free to be information resources. They're not obligated to a community or membership. The owners are obligated only to themselves. Which means they're free to offer what they find interesting as a resource for anyone to use or not. They're also free to boot people who are messing up the resource they're offering.

People *do* want to feel like they belong in groups. It's natural. We're social creatures. It *is* wonderfully peaceful and relaxing hanging out with other families who respect their children. But each unschooling parent is far more than their unschooling practices and beliefs. Unschooling parents can be Republicans, fans of Star Trek, vegetarians, metal heads, quilters, triathletes, living off the grid, horror aficionados, Muslims, math geeks. For some their family and unschooling *is* their biggest interest right now. But for many many unschooling parents, unschooling is a choice they've made for their family, like choosing to live in the suburbs.

And—this is a radical thought—your kids aren't unschoolers. They're kids. They're kids who are growing up in an environment where they're free to explore their interests. But unschooling isn't who they are. It *allows* them to be who they were born to be. What your kids need in terms of community isn't other kids who are free to learn. They need people who share their interests. *Your* interest is unschooling. Unschooling is usually not the child's interest. The people your kids will share interests with might be schooled kids. They might be adults. They might even be school teachers ;-) How the people they share interests with learned from ages 5-18 has little to do with whether your kids will feel a connection with them.

that was Joyce, on on Radical Unschooling Info, on Facebook, August 12, 2013

Holly and the pudding story, with this note:

"When Holly knew I was going to write this she said that was good, because some unschoolers seem to think they're immune from the possibility of getting into trouble."

SandraDodd.com/pudding(about Holly having gotten in legal trouble, when she was 17) Some people go another way on wanting to live in another kind of reality. They want to live in a pre-industrial world, a "tribal" world, or some other fantasy version of the present year, or of some point in the past. Reality

And slightly related, in a wrap-around way... notes to consider before unschoolers agree to be interviewed for "reality TV"

Someone asked how to keep unschooled kids from being taken away by the government. It was an odd question that came out of a different (someone else's) unschooling discussion, and I'm sorry such discussions exist.

Responses might still be there to read on Facebook here, if it's still there, or on a page I've made to save the responses, Real World.
Building an Unschooling Nest

Getting it (lightbulb moments)