Zach wrote this for an online writing class. You'll be impressed. (He quoted me, too, and that's fun.) The Problem and A Solution

This was in a post from last January - I have something new to add to it:

"I just recommended it (Strunk and White's The Elements of Style) to Roya. She is a creative writer - an outstanding writer. But her academic essays could be more polished and she makes up the punctuation rules as she goes along, doesn't really know why she makes the choices she does."

She never looked at it. Didn't have time. She DID write quite a few papers for her college courses throughout the semester. She asked for some proofreading and editing occasionally.

She took the "Writing Proficiency Exam" that is required of all students at her university. It gets scored by three professors - she just got her scores. Each professor scores out of 6 points and she got two 6's and one 5 for 17 out of 18 possible points.

So - I guess her "intuitive approach" works pretty well. Never had a single grammar, punctuation, writing, or spelling lesson.

Julian gets a B+

Well, here is a rather un-unschooling announcement. My 14 year old son, taking a course called Evolution in Society (that is HARD!) at Harvard University Extension, just got his second paper back. This is really the second paper he's written in his life, as he's never been an enthusiastic writer.

So, for all those newbies who find themselves having to defend the success of totally unschooled kids, this is far better than bringing up those stupid standardized test scores. Julian's been able to function in this class of all adults very well and happily.

Roxana's In-Class Essay on the History of Opera

Roxana's first formal "essay" was for a community college class in the history of opera. She was 14 years old. It was an in-class essay exam. She was worried about it—partly about her bad handwriting and partly that she thought there was some kind of mysterious format for essays that she'd not know about and totally blow it.

I told her she could print (hers is still kind of childish looking printing, but completely legible) and that the teacher would appreciate it!!

For the essay structure, I just told her to include an introductory paragraph where she says the main point and a little foreshadowing of what's coming in the rest of the essay, then write paragraphs where each has a main point plus backup and discussion about that point, and finish with a conclusion that is clearly based on the main points and sort of ties things back up to the intro. 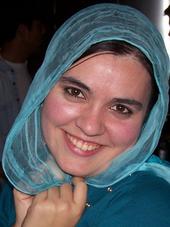 I didn't want to give her more direction than that—because I AM a college teacher and I hate reading those formulaic essays kids right out of high school often write. BOOOOORING! Rox is a really good writer and LOVES opera and has a lot to say about it. She got A+ on the essay. She also took the college's English placement exam and qualified for honors English. Totally unschooled kid—never had a writing lesson in her life. She writes fan fiction a lot. She plays online role playing games and writes detailed character descriptions. She writes on her Live Journal and she emails and chats with friends online. She reads a LOT and also does a lot of acting.

more on writing, unschooled teens, or parenting ideas for unschoolers