I should start off by explaining that I am not a mom yet, but I plan to take a lot of your advice from the beginning (including unschooling) when I have children. Because all the good points you and others have made on this site, I watch parents with their children when they come through the convenience store where I work. Because we sell a lot of junk food and candy, I see a lot of food issues and arguments over it.

Every day, sadly, I see at least three different children get spanked or denied anything at all because of these arguments. These kids throw terrible tantrums that disturb the whole store, with the loudest ones obviously being the poor frustrated souls who have been spanked in parental anger, while their parents yell at them. It’s emotionally draining on everybody, including the people who have to listen to such despicable behavior … oh, and the kids are usually pretty annoying, too.

Then, the other day, I saw something that really warmed my heart and spoke to exactly what you talk about. A man drove up to the front of the store in an old, rusty truck and came around the passenger side to unlatch and lift a boy, no older than four, out of a booster seat. They came in quietly, the boy holding his father’s hand and saying something in Spanish. With a bounce in his step, he led his father over to the doughnut rack and they picked out four or five, most of them shaped like stars and decorated with fat, brightly-colored sprinkles.

After that, the boy plucked a raspberry tea out of the drink cooler and then they spent five or six minutes shopping around the registers where the candy is. They finally came to me, as quietly and peacefully as they had been in the store, and I saw that, besides the doughnuts and tea, they had chosen five tootsie rolls, a pack of gum, some Sour Patch kids, a banana, a strawberry yogurt, a container with watermelon wedges in it, and a Slim Jim that the father was already eating.

As I began ringing them up, the boy happened to look down and his eyes got big. He dipped under the counter and came back up with a large York Peppermint Patty. I automatically looked at the father and he chuckled in that ‘his eyes are bigger than his stomach’ way and pushed the patty to me. I rang it up and put everything in a bag. They left the store holding hands.

As they drove away, I smiled. It was nice to see a parent come in and not leave screaming with a kicking child tucked under his arm. I strongly suspect it was because he avoided the number one reason I see kids collapse on the tiles in frustrated tears. He treated that peppermint patty and those tootsie rolls as just the same as the banana and the yogurt. He treated it all like food … with none of it more shameful than the rest.

I don’t have kids yet, but I do see a lot of them interacting with their parents. I have come to completely agree with you on your theories about food! I want my children to hold my hand in affection as we leave a store with goodies and fruit (all jumbled up in the same bag), because I fear the alternative only works until they get too big to restrain and it probably isn't much fun.

Hayden at the Church of Nerf ♥

I've learned he is not uptight about being able to buy everything right now. Like I am.
It's a lot of fun to stand and dream. And to Plan and Make Possible a Nerf-Satisfied Boy.
~diana :) 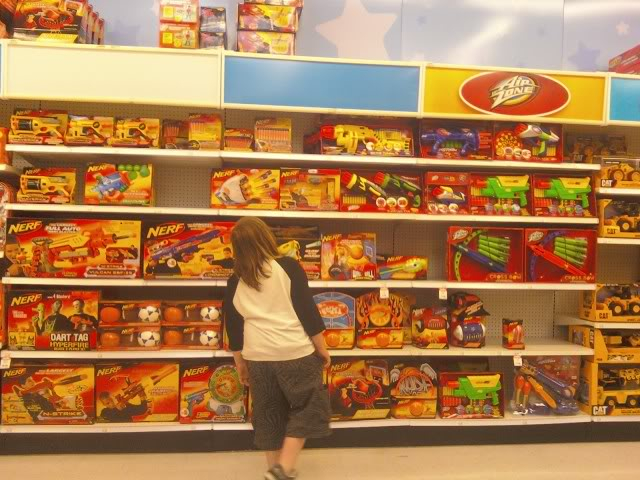 My boys have lots of energy in stores-especially super stores! We can easily be there for 3 hours, what with my shopping, Wyl's (10) toy interests and Storm's (4) fascination with things like UPC bars, sales signs and odd, nifty items. It is easier for me to shop with just one, but with Dave being out of town working for long periods, it often isn't possible.

One day, I was cutting out coupons at home and thinking what a waste it was for all those coupons I wouldn't use to be thrown away. I've seen coupon boxes at local places before that just don't get used, and I've tried giving them away without success. It occurred to me that it would be mighty handy to have it right there with the product for someone to use, but that they're tough to see lying flat on a shelf. So, I asked Wyl if he'd be interested in putting coupons on stuff for folks to use-he was enthusiastic. So, I cut out *all* the coupons, put mine in one envelope and the others in another envelope, grabbed a roll of tape and stuck them in my bag.

The next time we were shopping, Wyl had a great time looking for all the different products we never buy and putting the coupon on the bottle, box, or whatever with a small bit of tape. I felt great thinking about someone coming to buy something and being happy they had a little more money in their pocket when they left the store than they thought they would. Without his older brother running off down an aisle or sliding on the shiny floor, Storm was much quieter and really *shopped* with me, rather than getting loud and running around not looking where he might run out in front of someone or crash into a display in an unexpected place. Very nice.

After the interest in that wore off, I suggested Wyl see if he could find as many different countries on different packages in the store as he could, and Storm see if he could find numbers on the shelves or packages, starting with one and going to 10. They loved that idea! Wyl had a hard time finding more than 4 or 5 countries, so he asked if he could look for letters, first starting to find an A, then a B-all the way to Z. Well, *sure*! :~) We got 90% through the store with them being so excited to find a letter or a number! It is exciting for *me* to find things that they like to do in the store-kind of like solving a puzzle! :~)

When Megan was between two and three she would pick an avocado at the beginning of most shopping trips. Then she's hold onto it while she rode in the cart. She called it "her baby" and she would talk to it while we shopped. She didn't eat avocados then (still doesn't). We'd buy it at the end of the trip and DH would eat it later.

When Megan was about that same age, we'd go to our local big Asian market where they had live fish. Each trip started with a tour of the live fish—which fish was which, look how big they are, why are the crabs all standing on each other, and other questions.

Now that she is older, she likes to visit the butcher area of the grocery store and asks which meat comes from which animal (and which part!). When we lived in New Mexico, this was really fun because of a store called Ta-lin. Many types of meat and more whole fish than you find the regular grocery store.

Megan is thrilled by huge selections of Pocky and rows of ramen bowls.

We recently found a new Asian grocery store (Fu-bon in Portland). They have fruits and vegetables that we've never seen before. Megan had fun wandering through and checking out all the varieties.

The last time I bought jicama, Zoe (2.5 yrs old) sang a song about how she had jicama and how she was going to eat it all.

At Trader Joe's they hide a stuffed monkey for the kids to find. If the kids tell the cashier they've found the monkey, the cashier will ring a bell and make an "arggh!" sound. Then the child can go pick treat out of a box. Megan always finds the monkey, but doesn't always want the treat. She just likes to find the monkey.

If a display is disordered or packages that are supposed to be hanging aren't, both Megan and Zoe will stop and straighten it up.

I love shopping with my kids. We have fun.

This was an impromptu trip to the grocery store for candy. He used his own money to purchase and gave the cashier the money (with my help). We got in the car and Karl says "Mom, I love you." If you'll notice, he's Spiderman. And on the way home it was an elaborate story about how people were thinking he was dressed up as Spidey and they just kept looking at him saying he was just wearing a costume and he wasn't really a superhero, that he was just dressed up in a costume. The punch line: Really he *is* *really* Spiderman under that silly suit, you know. 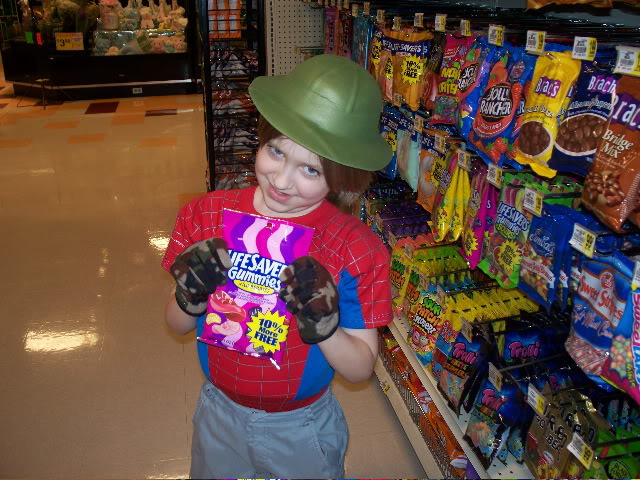 How to Raise a Respected Child