"The answer to most problems is in a box labeled
'MORE ATTENTION'.”

Pam Laricchia, on her interview of Robyn Coburn, 2017

Pam Laricchia wrote in her weekly e-mail, June 2, 2017. It has links to the recording and transcript of the interview. 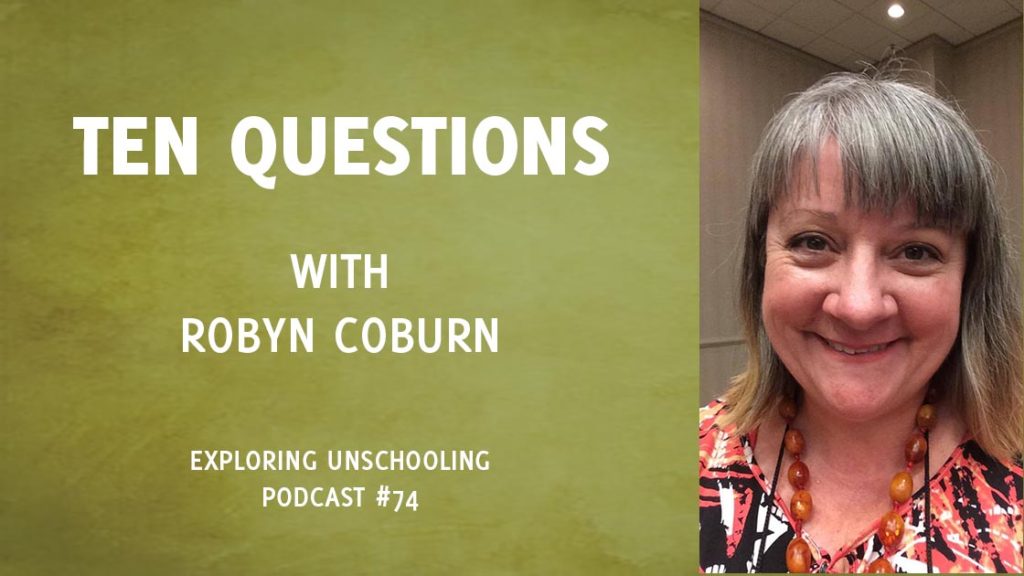 This week on the podcast I chat with long-time unschooling mom Robyn Coburn, whose seventeen year-old daughter has never been to school. We had a great conversation, talking about how she discovered unschooling, deschooling fears, sleeping patterns, tips for handling meltdowns, unschooling conferences, and much more!

You can  listen to the episode here   or   read the transcript here.

Her daughter Jayn was only ten months old when Robyn read her first John Holt book, How Children Fail—which she followed up immediately with How Children Learn. She was on her way to unschooling. :-)

She shared a great story about learning to swim that really clarified things for her:

I think homeschooling as a plan crystallized for me when Jayn was about two and a half years old and she had some swimming lessons. We had this very nice lady that came to our house. Jayn loved the water, we had a swimming pool that was part of the apartment complex. She was playing with the lady, it did not seem like she was learning to swim. It was all about putting her face in the water which she did all the time anyway. I thought, well, I do not actually know if she is getting anything from this. You can tell this was before I started unschooling or I would not have even started with it.

After about roughly five or six lessons it did not look like we were doing anything. It seemed like we were spending money unnecessarily and I said, "You know (winter was coming too), I think we will just stop with the lessons." Then the following summer, I just played with Jayn in the pool and she learned to swim by herself with just playing over the course of the whole summer.

Then somebody said to her, “Oh you are such a good swimmer,” and she said, “Yes my swimming teacher taught me.” My jaw hit the floor. I was like, “WHAT?” I said to her, “No she did not. Where did you get that from? You did this yourself.”

Interestingly, when I asked Robyn her biggest fear as she was deschooling, it was not that unschooling might somehow be detrimental for Jayn. Her biggest fear was that school would harm her.

I asked Robyn to share a bit about Jayn's sleeping pattern because I recall years ago noting the similarities with my eldest, Joseph's pattern. Jayn naturally lives on a longer day—more like twenty-six hours, rather than twenty-four. She was a solid sleeper, as long as she was tired. So Robyn followed Jayn on her schedule, following her body rhythms, slowly moving around the clock, which meant that about a third of the time they were awake all night. She explained, "The only way for me to have a peaceful life was for me to follow her. She was too little to be left alone. She could not do anything for herself like make food. So, I followed her."

She found it tiring, but also very interesting. They got to drive around the city at night, seeing it from a new perspective, and go to all night supermarkets in the middle of the night. And their homeschooling friends were easily accepting of the weird schedule, asking if she was awake days if they wanted to come visit.

Around the time Jayn was ten, she began to be comfortable being awake while Robyn was sleeping. They transitioned slowly, with Robyn napping on the couch nearby while Jayn was awake. It's been seven years now since Robyn's done an all-nighter with Jayn, and she doesn't regret that time."The fears that she would never be able to get up and go somewhere if she was allowed to have her own sleep schedule have not come to pass." And Jayn intimately understands how her body and sleep work, so now if there's something she wants to be up for, she can flip herself around in 3-4 days.

Understanding how you tick is so valuable. Can you imagine spending your childhood fighting your own body's sleep needs?

Then Robyn shared some tips about mothering during a child's meltdown, and the first one was not to call it a tantrum. The word tantrum carries so much baggage—that it is unworthy of your attention, a control device that you should ignore. Instead, when we see it as our child having a problem, it helps us to find our compassion for them.

Robyn also found it helpful to print out sage pieces of advice she came across and post them around where she would see them often. She felt surrounded by good advice, even when she was not online.

Another thing she found helpful was to remember that, "the answer to most problems is in a box labeled MORE ATTENTION." I love that! It's another way of saying what we talk about so often in the Q&As, the importance of our connection with our children.

There's also avoiding situations that you know your child doesn't like. If you know they will likely have a problem when they go somewhere loud and dark, then don't go somewhere loud and dark. And remember, it's futile to try to speak with your child logically when they are upset, or as Robyn explains, "emotionally disorganized." That goes for human beings of any age. Their emotional state is always going to trump their logic. Wait until things have settled and they're feeling calm and rational to chat about some ideas they might use for next time.

Before we chatted, Robyn counted and they've been to fourteen or fifteen unschooling conferences over the years. One thing that has been helpful for her and her husband James is that conferences have always given them a glimpse into what the next couple of years would hold for them and Jayn.

Then the other aspect I like is that time capsule aspect that I mentioned earlier, that you see these older kids and really, now that Jayn a young adult looking back, every promise was kept. When she was tiny we saw the ones that were five and six, and then she became exactly the same as those kids. Then we were looking at the pre-teens, the tweens, and she became exactly like those tweens.

So on and so on and so on, each time we went, that little promise of the future that this is what your kid is going to be like, that came true in every respect. It has been very reassuring.

And when I asked her what she's found to be the most valuable outcome so far from choosing unschooling, she answered succinctly: "I have a very happy daughter with no school damage and a close connection to her parents, to James and me."

that was Pam Laricchia's writing, about Robyn Coburn

After I brought and formatted everything above, I discovered that Pam Laricchia is putting the podcasts up on Youtube. I'm adding this because it's easy to embed!
More by Robyn Coburn

More by Pam Laricchia (things not on her site, mostly)

Something wonderful about Robyn's dad