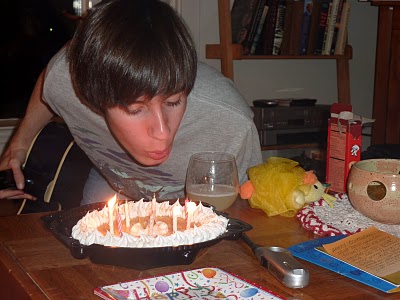 Logan celebrated his 18th birthday on Friday. It was his "Golden" birthday, the one where your age and birth date match. Eighteen on March 18th.

His is my youngest child so I now have 2 children that are considered legal adults. Brenna is 21 so it's been a milestone year for them both.

I managed to surprise Logan by arranging to have his cousin, Cailin, from Florida come up to visit for the weekend. They are silly and goofy together and it's been a fun weekend.

We have a houseful with Cailin, Brenna's boyfriend, Blake, and the kid's dad, Mark. This afternoon, grandparents from New Mexico are arriving so they can see both the kids before Brenna leaves for a trip to India on Wednesday.

I woke up during the night or possibly very early morning and could hear Cailin and Logan laughing and talking across the hall. It's one of my favorite sounds; the sound of happy kids. 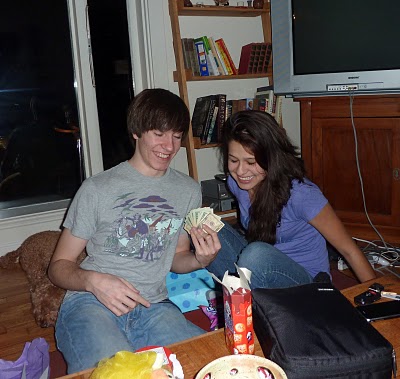 This morning, Mark headed out for a bicycle ride up on the Blue Ridge Parkway.

Blake went out early and came back with a dozen Krispy Kreme doughnuts. I mean who wouldn't love a guy who brings back warm doughnuts? :)

Broc jogged to the store and brought back organic coffee beans because there were none in the house. That in itself is reason enough to marry him again! :)

Brenna is on the other couch watching the newest episode of Glee on her computer. She and I each have an animal curled up beside us. The day will be filled with swirly comings and goings mixed in with connecting with family and friends. Logan wants Cailin to meet some of his friends here and also to buy a new musical instrument similar to a Sitar that he found on Craig's list. I anticipate a walk around the lake, a visit to the gym with Broc and an evening with a glass of wine and fajitas and a raucous board game or two with the whole bunch of us.

I didn't foresee that the benefits of unschooling would extend to these years when my children were grown. Our home has quieter times now than when the kids were young but is most often a place for laughter and love and warmth and connection. Sometimes, like today, it seems bursting with trust and happiness and contentment while on other days those elements are just quietly evident as we go about our lives.

I am aware of families where it is common to have drama and anger and jealousy and I am grateful to have helped create a home filled with peace and connections with occasional bursts of silly fun.

After Logan blew out the candles on the Key Lime Pie he requested for his birthday, he said jokingly "I don't have to move out now, do I?" That says so much.

I have an 18 year old who enjoys hanging out with his family and knows he is safe and loved right here. There is no need to move out so he can have freedom and space because he has grown up surrounded by both. These kids have been trusted so they trust. The make thoughtful mature decisions because they have had years of experience making decisions. In their own time, they will take the steps they need for more independence yet they know that they can come back home anytime they want.

I believe they will continue to take that trust about life and learning into the next generation and hopefully it will grow and grow.

The basis of our journey into unschooling and peaceful parenting was to create a family where trust and healthy relationships could develop and bloom. On this first day of Spring 2011, I have no doubts that was a good choice and one that will seamlessly continue into the next season of our lives. 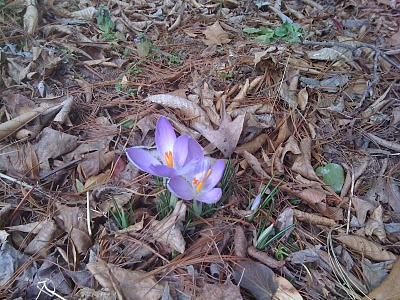 Lifted from Gail's blog by Sandra, as back-up.

Note in 2021: This was saved as part of a set, when unschoolers' blogs were busy and public. The internet has changed, and will change again, but I'm glad Gail wrote this and let me keep it.

Milestones in the Lives of Unschoolers