I don't believe in magic, but I find joy in wonderful coincidences and confluences. I like looking at a digital clock right at 11:11, for its pattern and symmetry. When planets line up I'm happy, even though I believe it to have no effect whatsoever on humans on earth outside the happiness they might have if they know about it.

Our family is experiencing a sort of magic window. As of November 2, our children (who are no longer children) have attained a set of momentous ages: 21, 18 and 16. This alignment ends on January 14, when Marty turns 19, but for a couple of months we have the only and last set of landmark years we'll ever have. 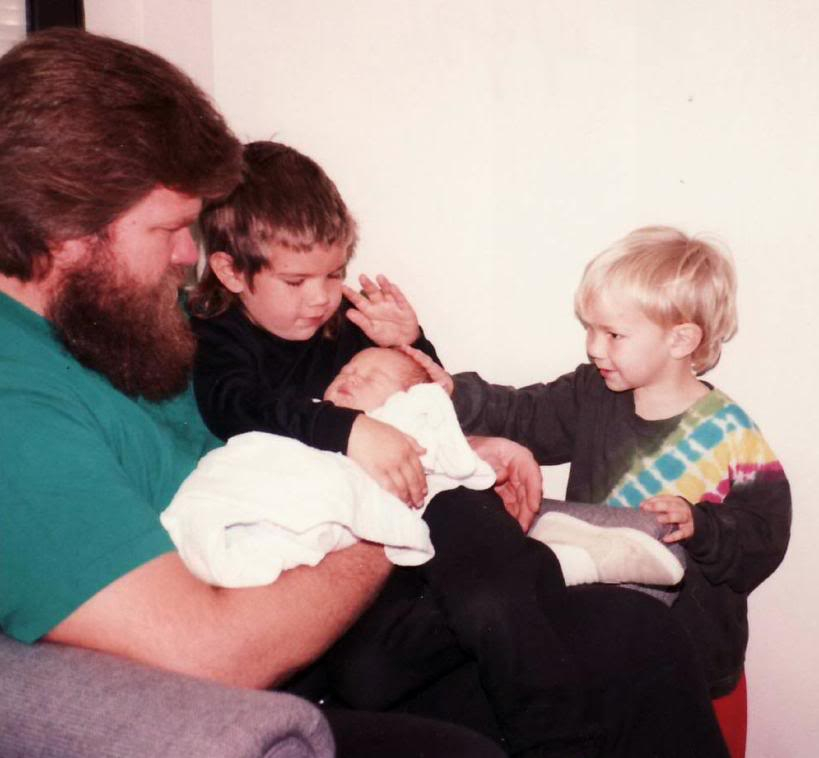 Our two boys are at the traditional ages of majority in different ways, in different places and times. Kirby is a man. Marty is a junior man. Our baby and only girl is "sweet sixteen."

I remember vividly when they were five, and three, and a newborn. Now they are, as a group, entering adulthood. I am moved to reflect and review.

There was some talk recently of the "end results" of the sort of parenting and unschooling our family has lived and shared. It seems this would be a good time to discuss end results, with two of ours past "school age."

Kirby was nearly twenty-one when he was offered a job in Austin, working for Blizzard, a video game company. He had been twenty-one for less than a month when he moved 600 miles away. Marty has been to visit him, and Holly plans to go next year. Thanks to cell phones and instant messaging, one of us usually has some Kirby news. He seems extremely happy to be where he is, doing what he's doing. He's had one small promotion and although I helped him with a resume, he decided not to apply for a senior position quite yet. His reasons were thoughtful and sound, and he is only twenty-one years old.

Marty worked a fulltime job the whole time he was seventeen, and for the past six months he has been traveling, mostly at his own expense. I had never known a teenager before to save over $5,000 and use it mostly for airline tickets. He's been to Washington state, Colorado, Oregon, Texas, Florida and North Carolina, mostly by air.

Much of Holly's time is spent on MySpace, out and about in the cyber world while safe at home. She plays with words, formatting, music and image manipulation. She keeps in touch with friends on two continents. Holly earned money babysitting, and paid her own airfare for a trip to Rhode Island to visit Quinn Trainor and her family last summer. In the fall she went with Marty to Florida to visit the Higgins-McBroom family and to go with them to the Live and Learn Conference in North Carolina.

Although it seems time for a status report, their lives aren't static. The excitement for me, as a mom, of having three children at special ages doesn't slow them down. I've thought of it as an alignment of planets, but it's more like a Triforce. Together they have power. They have friendship. They've experienced something out of the ordinary. Their lives have been shared for the benefit of other families, and they've always agreed to and helped out with that, by answering questions and being available at gatherings of unschoolers whenever possible, and by graciously allowing me to continue sharing details of their changes and adventures.

I can't really speak to any "end results," because they're still growing and experiencing the newness of many firsts in their lives. If there is ever an "end," the results won't matter anymore. But as long as life continues, the results unfold.

Are my children better friends and better employees because of the freedom they had? It seems so. What kind of managers will they be when they're in positions to make decisions about other people's employment?

When they marry will they be good partners? Would that be an "end result"? What kind of parents will they be?

What kind of neighbors will they be? How will their long-term health be affected by their early freedom to make their own choices? Will they be more or less likely to be binge eaters, substance abusers, or hypochondriacs? When they're old, will they still be active and interesting? Will their early freedoms affect their geriatric physical and mental health? I don't know, and probably won't be around to see.

In this window of time, though, I am satisfied. The peace and joy with which they live attests to the success of our attachment parenting and unschooling. Our lives are entwined and growing. The end result of twenty-one years of parenting as mindfully and as peacefully as I could is that I am content with the outcome. Someday I might report on the end result of twenty-five or thirty years of parenting, as life burgeons on.

The magic of the window is all mine, though, and Keith's. Looking out at our offspring, they are aligned in a certain way from our perspective, but they're not paused and gazing back. They are in the full motion of their own harmonic and intersecting spheres, spinning ever further away from us, and we marvel to see the celestial show. 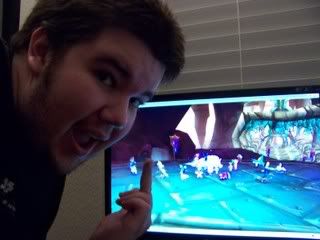 Kirby in Austin, by Kirby himself

Our friend Bo King did the tree art. The trees are intended to be happy dancing trees, representing me, Kirby, Marty and Holly. So that's Holly in the browser bar, if you see a favicon there. If you guess a URL for this site you might be right, but if you guess a bad one (or if you follow a bad link) you'll see this—another arrangement of the kid-trees. Thank you, Bo, again!
Bo did the Team Holly shirts too!