I don't know whether it's the dark or the quiet or biological cycle, but many of our family's best stories begin "One night..."

Once when Kirby was little, I was reading him to sleep with What Your First Grader Needs to Know, and he got so excited about the definitions of music that he got up to go tell his dad that music has melody and rhythm. He was clapping a pattern I had shown him. His dad, having been a musical guy since childhood, wasn't surprised at the news, but he WAS glad that a five year old could be so interested.

Just lately we've had a couple of tales worth telling. It was about sunset when Holly came and asked me what a Sousaphone was. I said it was like a tuba, but re-arranged so people could carry it, kind of wearing it, while they marched. While I was looking for a photo of one, I told her it was developed by John Phillip Sousa for marching bands and that some are made of a white plastic sometimes these days, but were always brass at first.

I asked why she was wondering about Sousaphones. She said that on Barney (Barney & Friends, on PBS), a guy who works at the school had one. 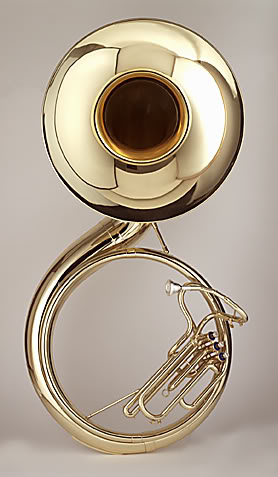 I looked in the encyclopedia, and in a book on musical instruments. There were other places, in other rooms, to look (illustrated dictionaries, the internet) but we didn't leave that corner of the library where we were for the next couple of hours. I pulled down a game called "Music Maestro II," which used to be advertised a lot when I was first homeschooling, and which I had bought at a thrift store a couple of years ago for $2.99 but had never yet opened. I hoped for a Sousaphone, but it didn't have one. It had cards with lots of other instruments pictured, though, and a cassette tape with samples of the sounds. Holly wanted me to play that right away.

I thought any moment she'd lose interest. We went through the modern instruments tape, putting the cards in their proper spots on the game board, or diagram, or whatever it could be considered. The game has older instruments mixed in with newer ones (Renaissance instruments set in among modern orchestral instruments), and Holly is familiar with recorders and lutes. So when the first tape ended and hadn't gone through all the instruments, she wanted the second tape.

During this, we had remembered to look in the Musical Instruments volume of the Scholastic First Discovery series, those with the plastic-overlay pages, and it did have a Sousaphone.

Holly ended up leaving before the second tape ended, because something more interesting came up. But by that time we had been playing with musical ideas and pictures and sounds and history until well after dark.

One night Holly had been working with marionettes she was making out of cardboard tubes, string and dowels. She came where I was online, reading, and asked me what the 'car' was in "cartoons"—what did the word really mean? (While fact-checking this article for me Holly said she asked because on a commercial they had said "car keys, carTOONS.")

I looked in the dictionary and it seemed from the etymology that it had to do with the pasteboard (called "cartone" in Italian) used for models for paintings in the Renaissance. I thought maybe they were sketching miniatures of paintings. I pulled out a piece of tagboard from my paper-stash, to show Holly what thickness "pasteboard" might have been, because they weren't using corrugated cardboard, for sure.

My husband, Keith, passed by and heard us discussing this idea, and said he had just lately seen a special on PBS about transferring sketches to other surfaces and that the tagboard "cartoons" were full size, kind of like stencils, with holes through for transferring the details.

It was great that while we were trying to figure it out from a dictionary, along came someone who lately saw televised explanations of the methods of 500 years ago. Keith was saying, excitedly, that they were discussing fresco paintings, and that that's the way Leonardo da Vinci had transferred the designs to the ceiling of the Sistine Chapel.

"Michelangelo." That was Kirby, from his bedroom down the hall. "Michelangelo did the Sistine Chapel."

I was most impressed by the calm joy with which this information was being exchanged. Kirby wasn't gloating that he corrected his dad. It was very matter-of-fact. Nobody was embarrassed or frustrated in any of the discussion. It could have gone longer, but we were done! It was great.

I can tell you part of why Kirby knew these things. For one, my sister has a full-sized rendition of the God-and-Adam elements of that painting on the inside wall over the door of her house. The house they've been building on for years has a two-story center section, and there was a big empty wall over the door. Their friend is a painter and he caused God to touch Adam again, and Kirby saw it before, during, and after. But beyond that, Kirby has always been a Teenage Mutant Ninja Turtles fan, and sought out information about the artists they were named for when he was just a little guy.
Click to enlarge.

The one at my sister's house wasn't quite this good,
but for a home-made house in northern New Mexico,
hers was pretty close!

It seems lately that more and more people want to know exactly HOW to unschool, but the answer is not what they expect. Looking back at these stories, in light of others like them, the best recommendation I can make is to open up to the expectation of learning. It helps if the parent is willing for a conversation to last only fifteen seconds, or to go on for an hour. Remember that if your "unit study" is the universe, everything will tie in to everything else, so you don't need to categorize or be methodical to increase your understanding of the world. Each bit is added wherever it sticks, and the more you've seen and wondered and discussed, the more places you have inside for new ideas to stick. A joyful attitude is your best tool. We've found that living busy lives with the expectation that everything is educational has made each morning, afternoon and evening prime learning time.

Last night, a Sunday evening, four adults were working a jigsaw puzzle of the Kings and Queens of England, which I had bought at a charity shop in England. Elsewhere in the house, four teenaged boys were playing card games and video games. Holly, who's ten, came up into the library where the puzzle was out and said, "Can I play?"

We listened to Marty Robbins' cowboy ballads, the soundtrack of My Best Friend's Wedding, Emmy Lou Harris duets, part of Annie Get Your Gun, some Weird Al, and finished a thousand-piece puzzle with text and illustrations of historic events in England from 1066 to the 1960's. Holly matter-of-factly discussed heraldry, crowns, ermine, royal succession, conflicts between France and England, and art.

The puzzle was done around midnight. My husband had quit at 10:45 to go to sleep. The adult guests went home, and I read Holly to sleep.

I don't know exactly what will be happening at our house today, or this evening, but I have every expectation there will be warmth and kindness and humor and learning. 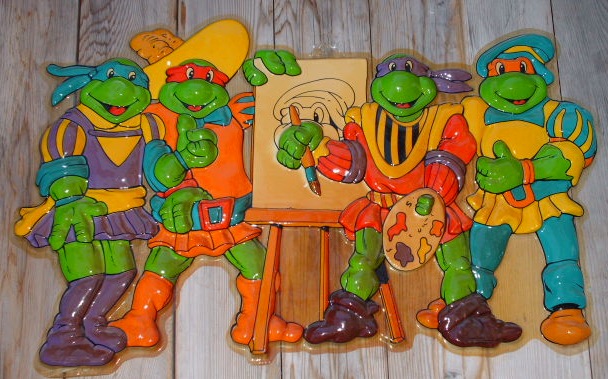 
More about flexibility and bedtimes

"Leaning on a Truck"—situations that encourage discussions

"Your House as a Museum"