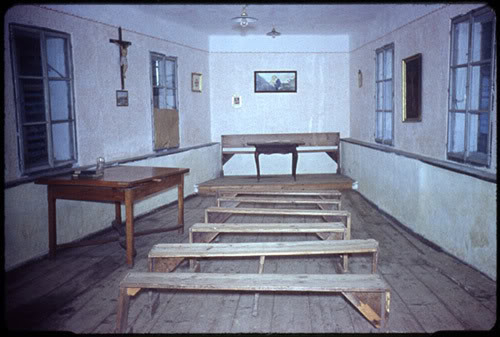 Hitler's first schoolhouse in the village of Fischlham, Austria, was a tiny, one-room affair. "Our teachers were absolute tyrants," he later wrote, evidently blind to the terrible irony of his words. "They had no sympathy with youth; their one objective was to stuff our brains and turn us into erudite apes like themselves."

For Your Own Good
Hidden Cruelty in Child-rearing and the Roots of Violence
Farrar Straus Giroux, 1983
new edition with a new preface 2002

In this book, Alice Miller opens our eyes to the devastating effects of education and care purporting to have "the child's best interests" in mind. She does this first by analyzing what she calls the "pedagogic approach", and secondly by describing the childhood of a drug addict, a political leader (Adolf Hitler), and a child-murderer. Her book succeeded in conveying not just factual (and hence uninvolving) but also emotional awareness of the way in which psychoses, drug addiction and crime represent a deferred and indirect expression of experiences undergone in early infancy. For a child to develop naturally, it needs respect from its caregivers, tolerance for its feelings, awareness of its needs and sensibilities, and authenticity on the part of its parents. This authenticity manifests itself in an upbringing style in which it is the personal freedom of the parents - and not educational dogma - that imposes natural limits to the child.

Since I was so much younger than my brother he never considered me a playmate. He played a leading role among his early companions. His was favourite game was cops and robbers, and that sort of thing. He had a lot of companions. I could not say what took place in their games, as I was never present. Adolf as a child always came home too late. He got a spanking every night for not coming home on time. (source)

Adolf lacked nothing, especially maternal affection from Klara Hitler who was a very sweet person. Klara who lost three of her kids before Adolf's birth will always feed him with a devouring affection and great care and will try to make up for her husband's severity. Alois Sr. was typical father figure of the XIXth century, and he might have been more severe than the situation demanded. After his retirement, Alois got frustrated by his idle life and grew impatient and violent. His outbursts of temper and anger turned towards Adolf who was only 7. (same link as above)