In 2003, on the Unschooling Discussion list, I wrote about Rubber Dolly and folklore, in response to a question.

In 2021, Laurie McPherson sent me a link to this half-hour documentary from 1971. One of the kids in Ireland sings Rubber Dolly. The narrator says those rhymes will be around forever, and MANY of the games and rhymes and songs in this video are similar to things I learned from other kids in Texas and New Mexico, in the 1950s and 60s.

From the top post, too, I had quoted something my paternal grandfather (Lynn Adams) used to sing to me:

A little man bought him a big bass drum
Boom Boom Boom
Who knows, says he, when the war will come
Boom Boom Boom
I'm not at all frightened, you understand
But when I'm called to fight for my land
I wanna be ready to play in the band
Boom Boom Boom

I came looking for an answer I had received and it wasn't here (so it will be now). I found it on the lyrics game, when the word was "drum": http://lyricsgame.blogspot.com/2010/02/drum.html

I sang it, but I went a bit too fast to be "right." Don't bounce babies that fast.

MamaDonna said....
He got all his children little snare drums-Boom-tidera-da-boom!
And they'd practice as soon as they'd finished their sums.
Boom-tidera-da-boom. (Second verse from song/rhyme entitled A Family Drum Corps by Malcolm Douglas)

p.s. The 1st verse is the song your Papaw used to sing. I found it on Google Book search [I linked to the very page. —Sandra].


I was looking for a reference on this song & came across your blog.

Our teacher played records of several children's songs
and this was one of 'em, sung by a woman with a voice that I'd call mezzo.

I have no idea as to the source of the records!

+ F. Eugene (Gene) Dunnam PhD +
+ Professor of Physics, Emeritus +
+ University of Florida +
And this was added in subsequent correpondence:

you can tell that those words came from 'between wars'; nowadays somebody would censor it as being draft-dodging, unpatriotic, etc., etc.!!!

The book MamaDonna found was published in 1891. It's called "Werner's Reading and Recitations, and the poem is "A Family Drum Corps," by Malcolm Douglas. It has several verses, and a cumulative addition each time as more instruments are added.

If anyone comes across this who knows a source for a tune (the recording Dr. Dunnam described, or something in a book) please leave a note! 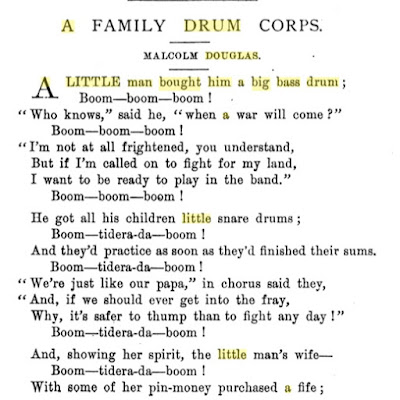 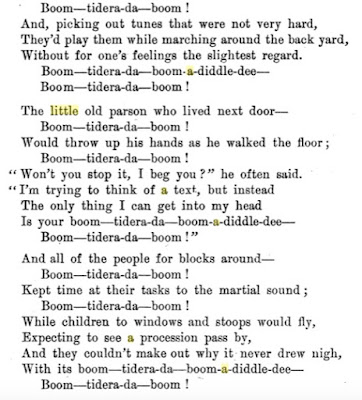 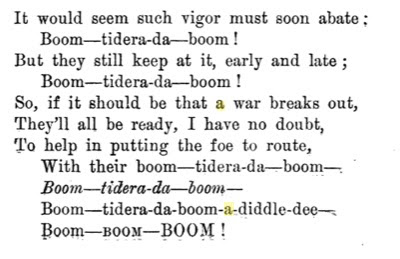