Role Playing Games as Part of a Rich Life

[Pam Sorooshian's response to someone who was worried about kids wanting to spend the whole day online or playing video games instead of something "more constructive."]

My kids have spent whole days playing video games or online. Sometimes for a week at a time when a game is new. Friends come over and play too. They trade video games around with friends. They read the cheats online or order books (I cannot even count how many kids I know who have learned to read this way).

Okay - I MYSELF have spend days playing video games or online.

If I saw a problem — if there was depression involved and it was being used as an escape, for example, I'd think about that and not about the symptoms.

Otherwise, I'd simply get us out of the house a bit by finding things to do that would interest my kid. We'd go to a science museum or the beach or the bookstore or library or go to the toy store and buy a new game or the art supply or craft store or hobby shop and buy a model to work on or I might find a workshop of some kind offered by the city recreation department or a dance class or go to Home Depot on a Saturday when they do their free workshops or to Joanne's Fabrics for a free knitting class or on and on...

However, I'd also wonder whether you might be overstating things - or worrying in advance about something hypothetical. Kids can put a lot of time into video games and still have a lot of time left for other things. If you're interested in the positives of video games - see Sandra Dodd's pages that started based on a presentation at the HSC conference a couple of years ago: The Many Benefits of Video Games

Things my kids have done online have been overwhelmingly positive. For example, they play games on Neopets - these games are great - lots and lots of visual development spatial games, lots of word/vocabulary/spelling games, and especially lots of math concept games. Neopets involves earning money and even calculating interest and so on. Its great. They also play MUDS and MUSHES - these are online role-playing games and can be very very elaborate. Roxana has been involved with Pern Mush for years - this is "serious play." I cannot imagine anything being better for developing writing skills than online roleplaying games. She also writes fan fiction — and lots of other stuff — including poetry. She puts it up on various fan fiction and poetry sites where others read and critique it. She creates websites and participates in "site wars" where people score each other's sites on content quality, organization and design elements.

The kids have spent many many hours playing SIMS. This is the source of all kinds of reflections on behavior and economics and life — for my kids it has branched out into interest in interior design and in architecture as well as a lot of discussion about people's behaviors.

They subscribe to interesting email lists - where they get a "word a day" for example - some kind of interesting vocabulary. Roxana studied Norwegian for about a year - receiving a short email lesson each day. 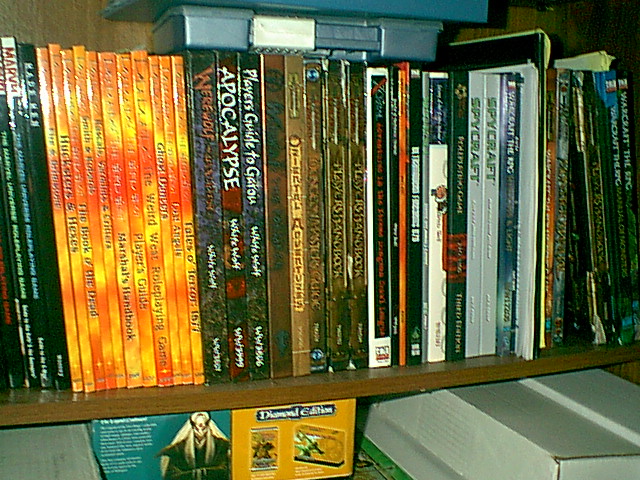 Lately Roxana's role-playing passions (online and in theater) have meshed with a college course in costume design. She specializes, online, in writing "descs" (descriptions of characters). She writes and sells her descs to other players — who give her role playing items in return. To improve her "descs" she started looking at costume design sites and museum sites to find paintings of people from different places and times. She has learned an AMAZING amount of history and geography through this interest.

This is just one direction that the online playing has led. But it gives you the idea that if you support the kids interests and are patient - don't see their current interests as a waste of time, see them as the launching pad for the future that will go in ways you probably can't foresee - that if they have support and parents that won't pooh-pooh their interests — they'll move on to bigger and better things.

In a contest, for example, between a kid who'd studied ancient history through text books versus my daughter, who learned it through costume, literature, drama, etc., I'd place my money on my daughter to know more and have a more complete picture. AND, what's more, she loves it — finds it endlessly fascinating. She just told me the other day that she thinks she'd like to major in history in college. She's just turned 16, by the way. She started out at the community college taking computer programming classes in order to be able to jazz up her websites. She branched out to music and theater classes - took a "History of Opera" course (again — she loves putting the operas into the context of their time and place — learned a LOT of history in that class that went far beyond opera).

Your child probably isn't interested in opera, so you're thinking mine is "different" and that this doesn't answer your questions - doesn't ease your mind when you see your child on the computer for hour after hour. But I could write similar things about many other teenagers I know - but their paths would all go off in vastly different directions.

Another thing is that unschooling is sort of "messy" in that there isn't a "plan" and kids can often go in one direction for a while and then seem to come to a dead end and turn around and go off in another direction. It isn't like a kid who studies certain high school subjects - a couple of years of science, four years of English, a year of American History, and so on — and then goes on to sort of do that same thing in college - follow a predetermined path. Unschooled kids often "meander" in their lives. They proceed in fits and starts. They detour. But those side trips can turn into their main life's journey when you least expect it. 🙂 And they all add up to make the child into the person they are becoming. Parents who want a conventional product — a child finishes high school, goes to college, gets a degree, gets a job, etc. — may or may not end up satisfied with what unschooling brings about — since it is, by definition, quirky and unconventional.

[Sandra Dodd, response to and reinforcement of Pam's tale:]

To improve her "descs" she started looking at costume design sites and museum sites to find paintings of people from different places and times. She has learned an AMAZING amount of history and geography through this interest.

I didn't know the term "desc," but we've had a sudden intense interest in New Mexico history, and maps lately. Here's an exchange between me and a map dealer who sold me a couple of maps for Marty:

Thanks for your order! Your historical maps will go out in Thursday's mail, Priority, and you will probably receive them on Saturday.

Since these maps will not require a very heavy mailing tube, I'm going to send you a partial rebate of the shipping fee to your PayPal account. $4.75 should be sufficient for postage and packaging, so I will be rebating $2.25 to you shortly.

Thanks for your generosity and honesty and all that!

The maps are for my 14 year old homeschooled son who has developed a sudden interest in the history of New Mexico for an online role playing game he's working on. It was fun for him to come in on a Saturday night and say "Mom, you know what I really need?"

I expected it to be something mundane and expensive.

"I need a map of the New Mexico territory when Arizona was a part of it."

Thanks for the background!

That followed a trip to the Albuquerque Museum where Marty found exactly the map he wanted! Unfortunately, it was from 1857. But I took down the info and found it online—not for sale, but with a zoom-in function kinda like mapquest, so he can examine it online.

So he still wants to go the state museum in Santa Fe, I've been informed of map archives at the engineering library at the university here, and so I have some transportation hours ahead of me!

The cool thing is that on the way to these places, Marty and I will get to talk about all kinds of things. Holly will probably go, and learn something cool, but I couldn't possibly predict what it will be. We'll have lunch in Santa Fe, and see the aspens all turned yellow, and will probably make a memory or two that will last us for many years.

Nobody would encourage a child to spend hours at online role playing games with that result in mind, but that is one of many natural outcomes of my letting Marty do what he wants to do online.

The marty/map stuff above turned into an article for HEM: What Marty Really Needed.

More on games in general