Holly told me by phone about playing with fish at Omaha Beach in Normandy the other day. I left a note about it on the Holly in England page asking if anyone knew what kind of fish, to let me know.

I got impatient and I thought I'd look on google. I didn't find my answer but on a Q&A page about fishing I did find mention of an Englishman who had much experience with shore fishing in Normandy, and was living in France. I wrote to him, and he graciously (and quickly) responded.

Subject: can you identify this fish?

I found your address while trying to google a fish.

" Regarding enquiries on Omaha beach and alike ask from our friend Richard, English native, who lives in the Manche district. His email as follows... "

My daughter is visiting England and France. She's thirteen. I'm keeping a record of her visit here: /england

But here's the fish question:

She said they were catching skinny fish about 3" long that looked like snakes. They would dig a hole in the sand and as the water came into the hole, these fish would come out of the sand and into the hole. The kids could hold them, and they collected up fifteen of them.

I asked her if they were eels but she said they were fish.

Thanks if you can help!

Sandra, in Albuquerque on the Rio Grande, far from beaches and fish like snakes

hello,
sounds like sand eels, which look abit fish like compared to freshwater eels which can be fished for, but are not found on the beach like you describe, and they would also be bigger.
regards
Richard
p.s; If this doesn't solve your puzzle drop me another mail

Of course, Holly might look at this page and say, "No, that's not them at all" *no, she confirmed! see below* but here's some of what I found:

Maximum length: 40 cm.
Appearance: Sand eels are long and slim, almost cylindrical with long pointed noses, normally with a protruding lower jaw. The dorsal fin goes along most of the back, while the tail fin has a U-form. The back has a green or blue colour, while the sides and abdomen have a silver lustre. (Found that on a Swedish site, here.)

And this site has not only a good photo of a pile of sand eels, but an even BETTER photo of three polar bears, one lounging like... well look.

This site says they're live in the Eastern North Atlantic, from the southern coast of Norway to Spain.

Holly confirmed the next day that those did look like her fish, and June 3 this photo arrived of one of the very fish Holly and the other kids played with: 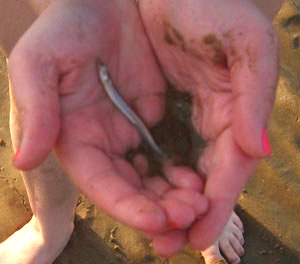 (Thanks, Richard, for generosity with time and knowledge.)


back to Holly's trip to England, or to Holly in general

or the mom homepage
(maybe that would be "the motherpage"...)