"I don't buy any chemicals anymore - use cider vinegar, baking soda, lemon juice and essential oils (in variations) for everything in the house"

That quote came from a person who loves the image below. There are chemicals she's never thought of involved in the biochemistry of calming or centering. Air is chemical. The original of that art was created on some surface using some media that was chemical (whether it was ink on paper or pixel code on a magnetic storage medium).

[That art is by Cameron Grey, a prolific Australian artist, who will put his art on your phone covers, or you could get a tattoo. The tapestries on the site are really beautiful. He's a good artist, and I doubt that he's afraid of chemicals. The bio here is easier to read (it's not in a light grey font, I mean). http://parablev.deviantart.com] Corporations and other evils

In response to someone who was going on about Xylitol, and then defended her rant against corporations with "I follow my intuition"

Please, anyone, everyone, don't believe anything you]'ve only read once, especially in a forum like this, or on facebook. In all my life I've never seen as big a flood of falsehood and nonsense as I've seen in 2016 so far. The second worst was 2015. Next year should be worse.

BE CAREFUL what you get excited about or fearful of. Be thoughtful. Read a little. Try a little. Wait a while. Watch. Not just about unschooling.

You might be amused at the curses she hailed on me. I saved it at SandraDodd.com/readalittleother Someone in an unschooling discussion:

"And at my house we avoid the chemical laden foods"

"Laden" isn't a word in normal use, so the phrase "chemical-laden foods" is probably a quote. It's good to try to notice when we're speaking other people's words instead of our own.
Phrases to Hear and Avoid
(here)

Maybe not an unschooler. It was a comment following a link to an article on tampons not being as dangerous as some people claim.

People that are in good health might have the luxury of calming down about chemicals in everything, however people with chronic health conditions, such as autoimmune disease, have to be very careful about the chemicals they are exposed to. They can be more sensitive than the average person to toxins, and they can experience negative side effects to chemicals in small amounts, that the average person may be able to tolerate without a problem.

I'm buying citric acid for an eventual second bath-bomb session, so I'll have it, and the package I'm ordering says right on it, clearly that there are no chemicals. "Chemical Free."

But I want to buy citric acid.

This is what I need:

Citric acid is a weak organic tricarboxylic acid having the chemical formula C₆H₈O₇. It occurs naturally in citrus fruits. In biochemistry, it is an intermediate in the citric acid cycle, which occurs in the metabolism of all aerobic organisms. (so sayeth Wikipedia)

But the package says...

There are 37 comments there; I'll link below. There would be more, but...

I removed a couple of comments for not being cheery or funny. Citric acid IS a chemical. Looking for harm is, in itself, harmful. Fear and negativity stir up chemicals your own body makes, that aren't good for you. Induce the better biochemicals by being sweet, hopeful and calm.

the original post
Chemophobia at rationalwiki.org has a beautiful graph about which foods do and do not have chemicals, and the page features this quote:
"There is no acceptable level of any chemical to ingest, ever."

(Go to the site for more details on chemistry and foods.)

In a discussion of foods, Schuyler Waynforth wrote: You are talking about things you've decided are dangerous based, probably, on readings you've done or conversations you've had that point out how one thing is being used for something else and how can that be safe?

Wikipedia has this on the safety of propylene glycol: Propylene_glycol#Humans and on how it is considered a safe alternative to ethylene glycol: /Antifreeze#Ethylene_glycol

to add to the propylene glycol fear discussion, it can be derived from canola and soybeans. This is an interesting article about not being afraid of propylene glycol. The Truth and Fiction about Propylene Glycol
www.naturallycurly.com
Curly chemist Tonya McKay seeks to dispel widespread misconceptions about the health risks of propylene glycol.


An unschooling story from Jen Keefe:

Sydney just spilled a bunch of ginger ale all over the kitchen- down into drawer crevices, the floor, all in the food processor. It was messy- ginger ale gets so sticky. I grabbed these wipes and had everything cleaned in about 1 minute. It was so easy. It was no big deal. Our conversation wasn’t even interrupted. It had absolutely no impact on our day, or rather no negative impact. Instead of a frustrated or distracted mom or messy clean up, Sydney lived in the experience of stuff like this being no big deal.

I didn’t buy stuff with “chemicals” for a long time. I didn’t want to kill my kids or the planet.

It’s not that I think this stuff is great for us or the planet but I do know that when I was more concerned with chemicals than the peace of my family life wasn’t as beautiful. My family wasn’t connected. My anxiety was always high. Our flow was rare to attain, rather than to interrupt. Now I know that living peacefully and easily is as/more important as what we eat or use to clean.

People make money off chemophobia, so keeping it stirred up feeds that market.
On the $$$ fuelling Chemophobia, from James Kennedy's section of chemophobia at his site. [2022 note: This is a 2017 save of the article, so remember it was 2016/2017 and he's in Australia (as regards commentary about policies and definitions).

This isn't about ingesting chemicals, but touching, working with borax, and about how one person's fright (plus the internet) can cause an uproar. Slime-making in 2017—big deal, lots of kids involved...

Penn and Teller, on gullibility and "activism."

"I use no chemicals inside or outside the house." —Mark Boyle
[quoted by Dean Burnett in the Guardian article "Why rejecting the modern world is a privileged fantasy", 22 September 2017, in which the chemical claim was more minor than the paleo diet and alleged rejection of modern culture]

I don't like the tagline on this one, but the main information is good. 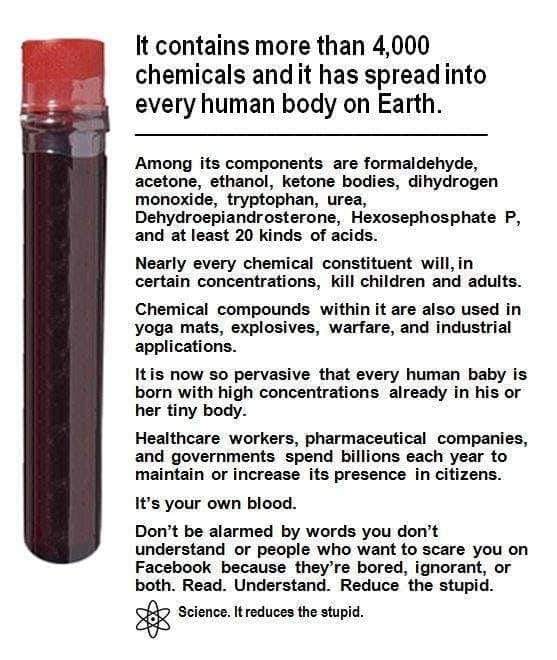 I don't know the creator's name, but here's my source.

Thanks to Caren Knox here's one about a banana sharing human DNA, and other scare stories. #REDUCETHESTUPID PART 4: BANANA!

I found a couple more there, but not four.