Cinnamon and sugar (if you don't keep cinnamon-sugar in a shaker all the time, mix 1 tablespoon cinnamon into ¼ cup of sugar) 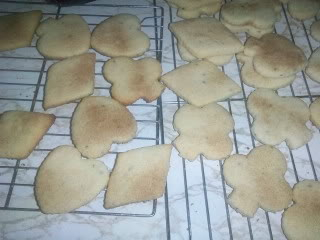 In a separate large bowl, mix the baking powder and salt into the flour.

Roll about ¼" thick and cut with cookie cutters. Thicker is better than thinner. Sprinkle with cinnamon sugar if you want to. It makes them prettier, but they're already made of sugar.

Bake on ungreased cookie sheets (or pizza pans or whatever) at 350° F for for ten to fifteen minutes (until the bottom is slightly browned).

Cool on a rack if you have one, so they don't get too hard.
Another way to cool them is to take them off the pan onto dishtowels laid out flat on the counter or onto paper grocery bags.

There are photos of cookies I've made here: https://sandradodd.blogspot.com/2008/12/bizcochitos.html

Here's a site with more information on the cookie and its name: http://www.cakespy.com/2008/05/hello-biscochito-primer-on-new-mexicos.html
Damn, people—leave your webpages where they are forever!
Here's a wayback machine copy: Primer on that...

SPELLING:
I grew up seeing the word with a "z" but when the state senate voted it the state cookie, they used the less archaic "s" spelling. Wikipedia has about 1.3 tens-of-thousands of "s" hits, and 1.3 million with a "z," if that matters. Spell it either way.