Thoughtful Parenting, as opposed to anarchy 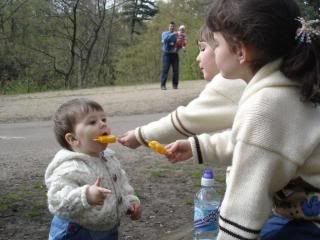 Adam Daniel, on the left; photo by his mom, Julie

Many times a newcomer has used the term "anarchy," in trying to argue that controlling children is necessary... (more on that below)

Many times a newcomer has used the term "anarchy," in trying to argue that controlling children is necessary. In the writing below, experienced unschoolers discuss that question:

I think anarchy is very under-rated! 🙂

I'm probably an anarchist once removed. FIRST, I'm a realist—and realistic enough to know that anarchy works only if everyone's on board with no other meddling agenda! 🙂

an·ar·chy
Absence of any form of political authority.
Political disorder and confusion.
Absence of any cohesive principle, such as a common standard or purpose.

When I say that unschooling isn't anarchy—it is more because of the third part of the definition. The first two are really about government, but I guess we could stretch it to mean lack of authority of the adults over the kids. If we did that, I'd want to talk about authentic authority as opposed to purely political authority and all that, because I do think there is authority—we may choose, as adults, not to use our (political) authority to oppress our kids, but we have it, nonetheless. AND we have a lot of natural authority just by virtue of living longer and having had the chance to learn a lot about what makes life good and because our kids are dependent on us in very real ways. What we do AS unschooling parents is to set things up so that there isn't the disorder and confusion of anarchy—we are the ones who have determined that there are important principles we want to live by, those are the organizing principles in our family lives, and we're modeling and supporting the appreciation of those same principles in our children.

The third meaning of anarchy—absence of any cohesive principles, such as a common standard or purpose—THAT is truly the opposite of what I think of as life in an unschooling family. I think that is what people sometimes miss—they get the idea of not being the equivalent of an oppressive government, but they don't get that there IS something else, guiding principles that bring order and purpose to life, and that they, the parents, need to find ways for the whole family to live together according to those principles.

Sandra repeatedly points out that the best way to do this is to live it yourself—treat the kids kindly and they learn to be kind, etc. I think some people brush this aside as too pat an answer or something. It really IS the most significant thing parents can do. Or they think they are facing more difficult challenges—their kids hit each other, for example, even though the parents don't hit them - so they think modeling isn't enough. Right. I agree. You also have to be clear about another principle—something like, "Everybody should be safe from harm." Again, that's why this isn't anarchy—parents should step in (and use their authority) to make sure everybody is safe. The parent doesn't have to shame the kid who hit; the parent doesn't have to yell; the parent doesn't have to say, "You're so mean," or "I've told you a million times, when are you going to learn," or any other derogatory statement—but the parent has to give clear, honest information: "I'm not going to let anybody hurt anybody else. Everybody should feel safe in their own home. If you were a grown-up hitting another grown up with a stick, you could go to jail for it." (Depending on age—I'm not saying threaten or scare a little kid.)

If a grown up is hitting another grownup with a stick, he WILL go to jail for it. In Albuquerque, at least (and maybe the whole state; not sure), domestic violence calls have a mandatory lockup for at least one of the people involved, stick or no stick.

Threatening or scaring isn't necessary, but as kids are getting older, I think it would be a disservice NOT to talk to them casually about criminal acts, and such things not being okay.

For a few years Holly used to say "Can I hit Marty?" when she'd get mad at him, knowing full well I would say "Yes, when you're eighteen." Or I'd say "Yes, when you're eighteen, if you have your own place. Invite him over, and then hit him." And Marty would say, "Yeah? I'm not going to your eighteenth birthday party, Holly." She was seven, nine, eleven years old in those days. Then they stopped discussing it.

After that time she became seriously fond of Marty. She totally admires him and is proud to be his sister. And in the past year or so she took an interest in Kirby and started seeing good things about him, whereas before then he had irritated her, and sometimes not been as nice to her as Marty was. She even said "Kirby's my favorite brother" once last summer, which surprised us both.

I don't think that would be as likely to have happened if I had spent a lot of energy trying to make them be friends. I didn't. I helped them find separate things to do, and helped them not feel trapped with the siblings. Hundreds of times, Keith or I took the least satisfied of the three out away from the house for one reason or another, real or trumped up, so the other two could relax and the angry or frustrated one could express herself or himself at length (or not, as she chose).

When one of the younger ones would say "Kirby's stupid" or "I hate Kirby," I would express sympathy and maybe slight agreement or acknowledgement that he could be irritating, and it must be hard having a brother so "out there" and sociable and sometimes insensitive, and I was sorry, and what could I do to make the moment better, but I would always point out some of this: while I understood their frustration, I really loved Kirby, and that Kirby would have been an only child if not for them, and for me having more children, and so they might want to cut him some slack because his ideal life was interrupted by their presence. I did the "on the other hand" commentary, at least a little.

Or I'd handle it with humor. The Marty-to-Kirby humor, starting when they were very young, involved my offer to smite Kirby. "Kirby's not sharing." "Shall I smite him?" "Yes!"

And I would go to Kirby and say "Marty wishes me to smite you, Kirby. Is it possible you could share?"

No smiting actually went on in those cases, but the idea of it seemed to satisfy.

My tale of actual spanking is here:
SandraDodd.com/zeneverything
I could hide it, but it's more useful shared.

I'm picturing the kid with the burning stick [from an earlier post in that thread] - and in that case, that's the kid I'd pick up. I'm picturing that I'd pick him up, gently be holding his arm with the stick so that the stick is in my control and no longer waving around endangering anybody else.

I might pick the stick up! But that would give him something to wrestle about and whimper and fight about.

I'd probably pick the little guy up and say "Drop the stick" if it was a seriously dangerous situation, and because I have LOTS of "No" tickets stored up, if I said "Drop the stick," my kid would drop the stick in a heartbeat.

Parents who say "No" too much have used up all their tickets. I see it all around me. "No" is so devalued it's like dust, covering everything, making it all dull and boring and the kids don't care anymore.

With babies, if a baby has a knife or something dangerous, the best way to get him to drop it is to offer him something pretty. If you just hold it out and he wants it, he'll drop the knife to grab the new thing. It's not until they're older that they figure out they can hold one thing in each hand.

It works with older kids too, though—even teens. 🙂 You just have to figure out what is more attractive than the thing they're holding (physically or figuratively).

Siblings (getting along, or not... lots of ideas)