Also more formally known as Muiredach MacGregor, Sir Mordygan has been involved in the SCA since he was a little boy. Albert von Dreckenveldt and Selene of the Sky were King and Queen of Atenveldt when Mordygan was new in the SCA (1981). Mordygan wrote "I have memories of most of the kings and queens of my early childhood, but the first that I really have a lasting memory of are Irel I and Tess (1991), as they were the ones that knighted my dad."

[Mordygan is the son of Sir Gregor von Münchhausen, Baron of al-Barran.]

Mordygan's full awards list is here, in the Wimble Herald's records. He was recognized as a child for being a valuable and promising resident of al-Barran and of the Outlands, and he is fulfilling his potential admirably, having been knighted in July A.S. XLI (2006) and serving as King's Champion to Artan VI.

Photo credits are yet vague, but I would be glad to clarify if details are sent to [email protected]. Those from the day of the knighting are by Lady Cristin of al-Barran or Lady Natalie of Drygestan. The one at coronation is by AElflaed. The one from Outlandish is unknown (but would like to be known). 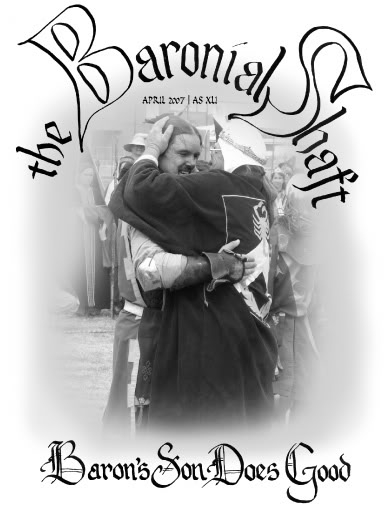 Photo by Karl, photo editing by Asta, calligraphy by AElflaed, for April Baronial Shaft cover after Mordygan won Crown for Madigan, in March 2007.

Guest Fest main page with past and future information